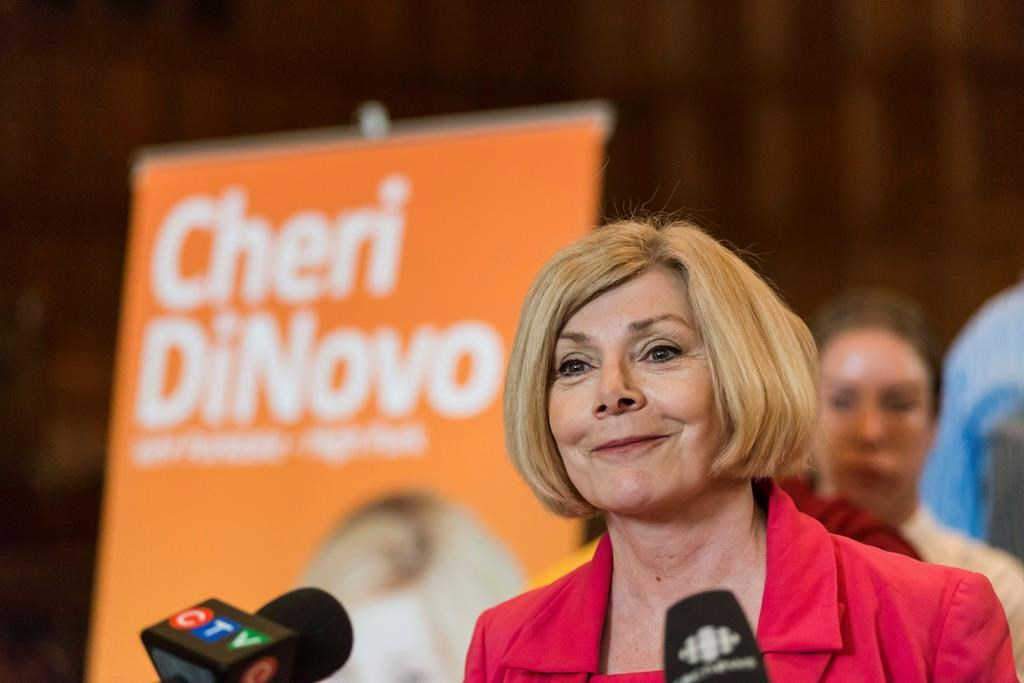 Ontario New Democrat Cheri DiNovo announced that she would run for the leadership of the NDP on Jun2 7, 2016. Photo by The Canadian Press.
Previous story
Next story

Veteran Ontario New Democrat Cheri DiNovo announced Tuesday she would run as an "unofficial" candidate for the federal NDP leadership, but won't pay the $30,000 deposit the party requires of would-be leaders.

"I intend to fight not for me, but for the NDP ... to fight for principles rather than for a position," DiNovo told a handful of supporters at a United Church in her Toronto riding, where she is an ordained minister.

"Money should not in any way be a barrier for a leader of a democratic socialist party."

DiNovo criticized the NDP executive for requiring a deposit fee and setting a spending limit of $1.5 million for candidates who hope to replace Tom Mulcair as federal leader, saying she plans to run "a grassroots-fuelled" campaign.

"It shouldn't be about how much money you can raise to buy buttons and bobbles to promote yourself," she said. "It should be about principles."

However, Elections Canada rules show DiNovo would not be able to legally raise funds for her candidacy unless she pays the $30,000 deposit for NDP leadership hopefuls.

The regulation states: "Every person who accepts contributions, loans or transfers, or incurs leadership campaign expenses, has to register as a leadership contestant even if he or she later decides not to run for the leadership."

"I think anybody wanting to run in a leadership race must follow the laws around this — and there are many and they're in place for a reason," said former NDP leadership candidate Nathan Cullen.

"That's the basic entrance to this very serious conversation."

MP Alexandre Boulerice said the party welcomes all comers, "but if you want to be a candidate, you have to follow the rules."

DiNovo, a long time champion of the poor and the LGBTQ community, promised to step aside if a stronger candidate came along espousing the same social democratic principles as she does.

DiNovo has represented Toronto's Parkdale-High Park riding since taking it from the Liberals in a 2006 byelection that was called when Gerard Kennedy resigned to fun federally.

It's more important for the NDP to defend its core values than to change in order to become more popular in hopes of forming government, she added.

Political scientist Christo Aivalis of Queen's University called DiNovo an interesting and noteworthy candidate, but said it's difficult to take her seriously if she's not committed to the race.

Ultimately, Aivalis said, she's applying for a job that could make her prime minister of Canada.

"It's not the kind of job where you get to put one toe in."

DiNovo said the New Democrats drifted toward the centre in the 2015 federal campaign, a position she said will never lead to success because the party needs to stand in "distinct contrast" to the Liberal party.

She said she won't seek re-election in the 2018 Ontario election, and neither confirmed nor denied she'll seek a federal seat in 2019.

DiNovo, who boasts that she has had more private member's bills passed than any other member of the Ontario legislature, campaigned successfully to amend the province's human rights code to include gender identity and expression, and introduced a bill to give same sex couples the same parental rights as male-female couples.

She also convinced the Liberal government to recognize post-traumatic stress disorder as being work-related for police, firefighters and paramedics, after introducing four separate private members' bills over seven years.

There are no official declared candidates to replace Mulcair, who announced his resignation in May after 52 per cent of delegates at the New Democrats' post-election convention in Edmonton voted for a leadership review.

Voting to select the new NDP leader will take place in September or October of 2017.

With files from Bruce Cheadle