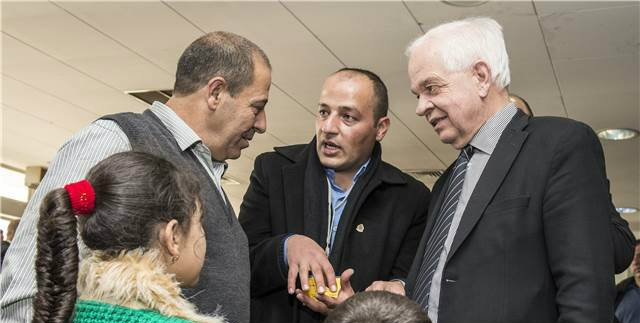 Immigration Minister John McCallum meets a refugee family about to board a flight from Amman to Toronto on December 20, 2015. File photo via National Defence.
Previous story
Next story

The first year of the Liberal government’s marquee Syrian refugee resettlement program came in about $136 million under budget, the government said Thursday.

Bringing in 25,000 people between November and the end of February cost $319 million, with the biggest costs being transporting and welcoming them, figures released by the Immigration Department show.

Transportation was cheaper than expected, temporary military housing was never used and neither was a contingency fund, Immigration Minister John McCallum told a House of Commons committee in explaining the cost savings.

"The reason we spent dramatically less than we said we would is because we were dramatically efficient," he said.

The budget set out for the program last November was $678 million spread over six years. It was divided up into five phases — the first three focused on the identification, processing and transportation of refugees.

The maximum budget for those three streams was $188 million. Those phases are over and figures released Thursday estimate $108.5 million was spent.

But the lion’s share of the budget — the cost to actually settle the refugees and provide income support, language training, job services and the like — remains to be spent.

Refugee settlement agencies have been appearing before MPs for weeks detailing concerns about the settlement process — from women not being able to attend language classes because they can’t find daycare to struggles with securing long−term, affordable housing.

For 2016−2017, the department has estimated it requires at least $99.6 million for settlement services.

Conservative Immigration critic Michelle Rempel said she doesn’t trust the budgets — the original campaign promise on refugee resettlement said the endeavour would only cost $250 million, she pointed out.

The number of agencies struggling to handle the influx of Syrians would suggest the government isn’t basing its budget on talking to people on the ground, she said.

"I really think as opposed to what the prime minister said during the campaign, this isn’t a matter of political will," Rempel said.

"This boils down to the ability to manage and we just haven’t seen that here."

The Liberals are also under pressure from the Conservatives to take in more refugees from the region and help resettle hundreds of Yazidis — ethnic Kurds who follow an ancient Middle Eastern faith.

Islamic militants have been brutal in their treatment of the Yazidis since the war in Iraq broke out, including buying and selling their women as sex slaves.

The majority of Yazidis are in Iraqi Kurdistan, their home country. That means they aren’t defined as "refugees" by the UN, and as such, aren’t eligible for government resettlement to Canada. They could be brought here under other provisions of immigration law, such as humanitarian and compassionate programs.

Those living in camps in Turkey could be resettled. There are several Yazidi families in Turkey being sponsored privately by a group in Winnipeg, but they are stuck waiting for travel paperwork. Difficult getting such paperwork from Turkish officials for the Syrians was one of the delays in the Liberal program last fall.