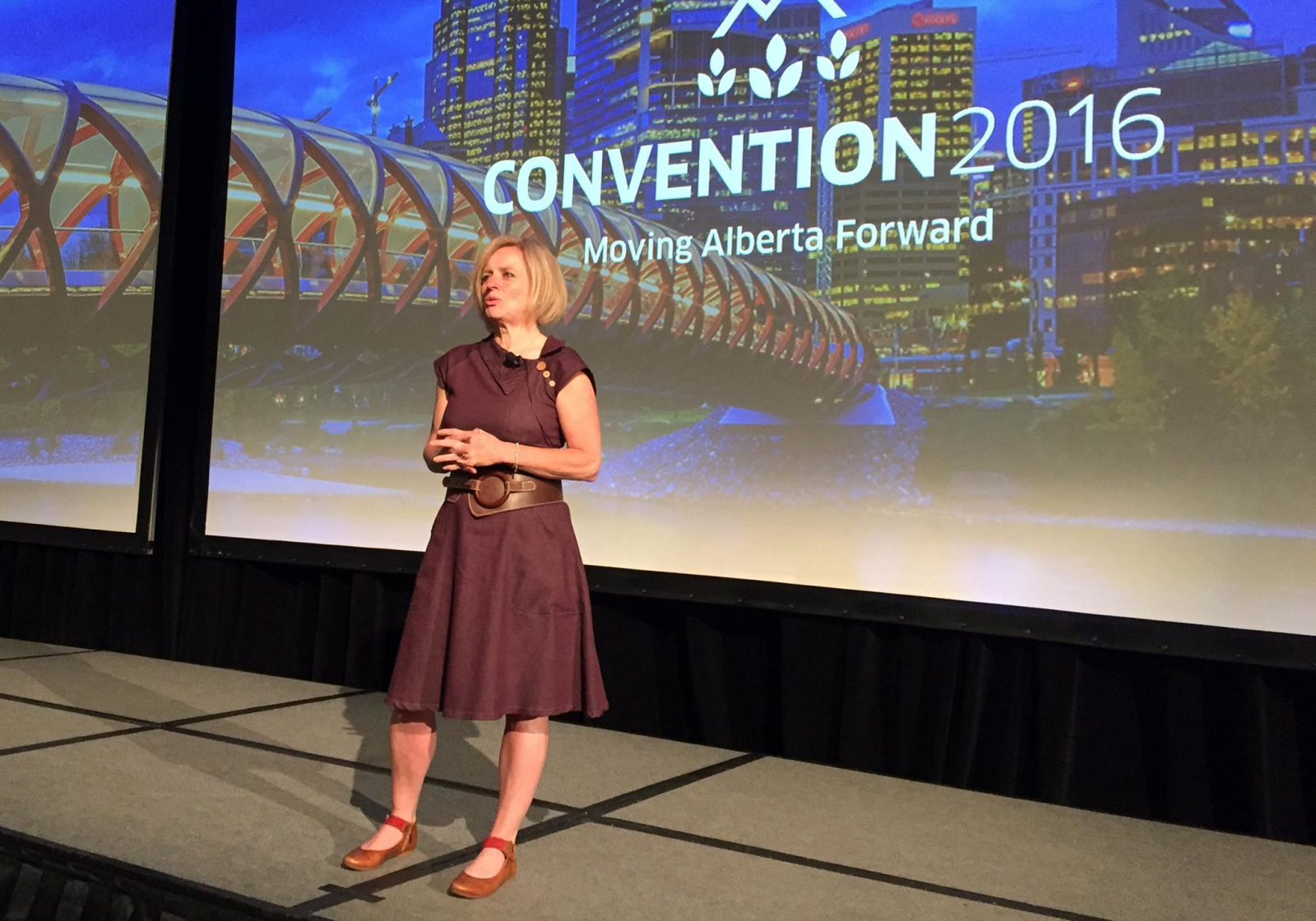 Rachel Notley said this was the first Alberta NDP convention to have the premier as one of its delegates. Photo courtesy Premier Rachel Notley's Facebook page.
Previous story
Next story

The left-leaning party had never formed government in the historically right-wing province and were widely considered inconsequential outside of Edmonton, prior to the 2015 election campaign.

That was all before E-Day, where they increased their caucus by 50 members — the majority of which are women — and ended 44 years of Progressive Conservative rule.

“There has never been an NDP convention where one of the delegates also happens to be the premier,” Premier Rachel Notley said in her opening remarks at the convention’s welcome ceremony.

They beat the odds, and the party is still riding last year’s high.

“I remain very, very proud of what you folks have done in the last twelve months since E-Day. That pride was also there during the campaign. Albertans wanted change, and they wanted the change we were offering,” NDP campaign strategist Gerry Scott said at the party’s annual convention on Friday

Now, they’re hosting their largest-ever convention in downtown Calgary’s Hyatt Regency with over 800 delegates in attendance. It's a chance to celebrate, but also comes during hard times for the province, still reeling from the aftermath of the Fort McMurray wildfire as well as an economic downturn that started before the NDP was elected due to slumping global oil prices that caused tens of thousands of job losses.

Calgary Fort MLA and finance minister Joe Ceci — who is MCing the event alongside Strathcona-Sherwood Park MLA Estefania Cortes-Vargas — took the stage next. Ceci poked fun at the official opposition during his opening remarks, mocking their question period tactics and refusal to act to mitigate the effects of human-induced climate change.

He quickly shifted his tone, saying that he can’t wait to discuss how Alberta’s climate leadership plan — introduced to the legislature by Environment Minister Shannon Phillips last month — “is not only leading the way for the rest of the country, but is also making Alberta a healthier place to live and changing the way the world sees us.”

Motions to move-up multiple resolutions calling for a moratorium on fracking and to put new restrictions of pipeline construction were resoundingly struck-down by delegates on the convention floor early Friday afternoon. The NDP government has committed itself to promoting new pipeline construction in the province, including the controversial Kinder Morgan pipeline that would see Alberta oilsands transported by pipeline to the west coast in the pursuit of Asian markets.

Yet there is tension between the party and the NDP government. The party's resolution on pipelines states that they "urge the provincial government to discontinue advocacy or promotion of specific pipeline projects while stakeholders such as First Nations communities, Métis settlements, farm owners, and municipalities have expressed objections to a pipeline project being built through or terminating on their land."

Other resolutions on the docket cover various aspects of the party's "climate leadership" plan, dedicating the party to liquidating investments in thermal coal and further investment in renewable energy.

The convention’s first panel discussion hosted E-Day veterans offering a retrospective on what exactly went wrong for the Progressive Conservatives in 2015 and how the NDP capitalized.

Post-Redford, the PC party adopted rhetoric that necessitated accountability and principled governance. However, many of former Alberta Premier Jim Prentice’s early actions fed into the narrative that the PCs governed from a position of arrogance — all at a time when the price of oil sent Alberta's economy tanking.

“Even despite this economic downturn, the PCs were really only in this for themselves, their friends, and insiders,” Premier Notley’s communications director Cheryl Oates said at the panel.

That was evident during the Wildrose floor-crossing in December 2014 when Prentice convinced Wildrose leader Danielle Smith and eight other notable Wildrose MLAs to join his caucus. Smith claimed that the socially conservative fringes of her party didn’t represent her vision. She sought to unite Alberta’s progressive-minded conservatives under one party to prevent a potential vote-split.

But Smith later called her decision naive, as Prentice effectively cut the head off his greatest political foe. Pundits said democracy had been trampled on, calling it a shameful episode in Alberta’s political history. What could have been seen as one of the greatest political maneuvers in Alberta’s history was instead viewed with derision by most of the voting public.

His tactfulness paid off in the short-term, marginalizing the Wildrose and keeping them from leadership in 2015. But the electorate swung back by electing the NDP, a party that looked more honest, more accountable, and more competent than any other that year.

“In that period, the premier and the caucus really emerged as the real opposition,” former B.C. NDP strategist Gerry Scott, who helped the Alberta NDP win the 2015 election, said. “I think we can all remember those days where the Wildrose and the Liberals were invisible in talking about what was going on and presenting an alternative to a government that was increasingly in disaray.”

“Whether it was luck on our part, Prentice launched his campaign with Nickleback's ‘Burn It To the Ground’ playing in the background,” Oates said. “And then he never talked about his budget again.”

And then there was #mathishard, a Twitter hashtag backlash against Prentice that claimed a comment he made toward Notley during the debate - he questioned her ability to do basic math - was sexist.

The Calgary Herald published a story on Sept. 24 called “How ‘math is difficult’ (or #mathishard) blew up on social media,” calling Prentice’s comment to Notley “one of the most notable moments” of the debate. The Herald compared #mathishard to Prentice’s earlier statements telling Albertans’ to “look in the mirror” to find out why the economy was in such bad shape — a major misstep in his campaign that fed into the “PC arrogance” narrative.

The response played very poorly for Prentice and the PCs.

But it wasn’t just the PCs faults that lost them the election. Oates said that most pundits said that she won the leaders debate, adding that “if we did have to pick a turning point in that campaign, that was certainly it.”

Oates and her colleagues on the campaign launched a social media strategy they called “extremist of the day” in response to Prentice’s claim that her party was made up of unelectable extremists.

They chose former PC premier Peter Lougheed as their first extremist, pairing his photo with text describing his 2011 assessment that the province should raise corporate and personal tax rates. She said Prentice never uttered the word “extreme” throughout the rest of the campaign.

“I think we were able to break their frame and put it like what it really was. As a result, the public started thinking about the government as a government in complete disarray, constantly changing its mind,” NDP election “war room” director and chief of staff to former Saskatchewan premier Roy Romanow, said Brian Topp, who is Notley's chief of staff.

Lougheed came up a lot on the convention’s first day. Edmonton Oilers assistant captain Andrew Ference, a special invited guest at the convention, quoted Lougheed in his keynote address to the delegates, stressing the need to shift away from extractive industries toward diversifying the economy.

“The strengthening and diversification of this province can be helped by your government in many ways," said Ference, a graduate of Harvard's corporate sustainability and innovation program. "In order for innovation to flourish, there must be strong connections between its institutions.”

Ference advocated for the free flow of information between universities, industry and government — linking schools to start-ups and larger industries.

And the NDP are thrusting forward with a climate change plan that will see the province phase-out coal-fired electricity production, implement a province-wide carbon tax and cap industrial emissions from oil sands development.

She said the new law would deliver on the New Democratic government's promise from last November to respond to the challenge of climate change while focusing on the priorities of everyday Alberta families.

“For too long, governments in Alberta chose to ignore and deny the problem," Phillips said at a news conference at the time. "That approach didn’t work.”

If adopted, the Climate Leadership Implementation Act would apply the NDP government's new carbon tax, pricing carbon at $20 per tonne in 2017, before raising the levy to $30 per tonne in 2018.

The convention will host director of the Pembina Institute, an Alberta-based environmental think tank, Ed Whittingham on Saturday morning to discuss the province’s climate strategy before Premier Notley’s speech to the delegation.

Stay tuned to the National Observer for continuing convention coverage all weekend.