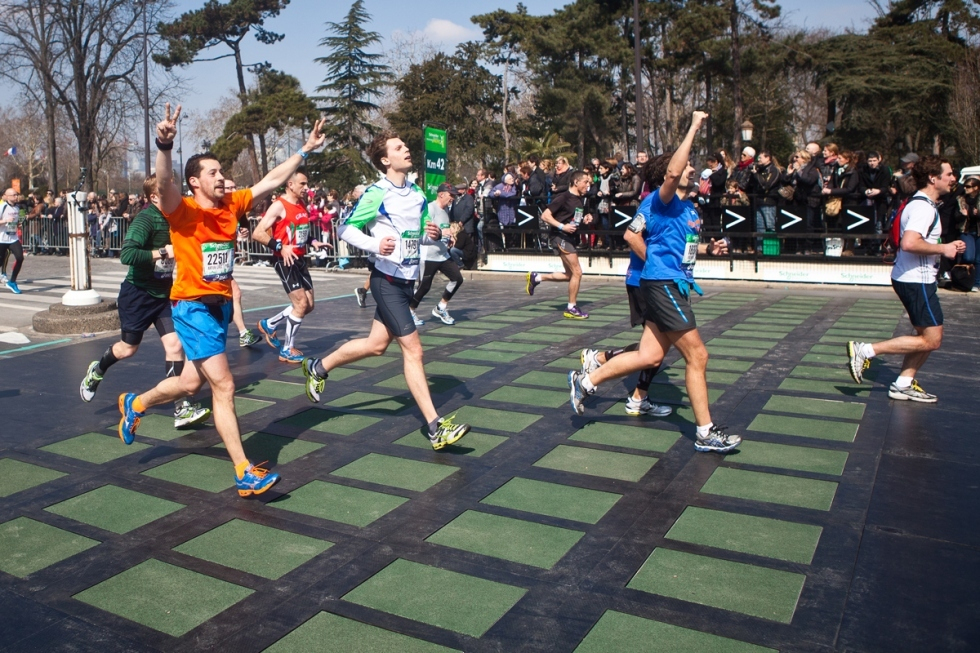 Your footsteps can power a city.

That’s the idea behind Pavegen, an English start-up that manufactures tiles that produce power when you walk over them and which calls itself “the future of flooring.”

Just walking over Pavegen’s flooring is enough to power street lamps that light up as you pass by them.

Up until now, lighting has been Pavegen’s main application, but as the company quickly grows it’s becoming more ambitious.

Laurence Kemball-Cook talks about using the tiles to power batteries, for instance.

Kemball-Cook is fond of comparing Pavegen to electric car manufacturer, Tesla - a comparison he’s made in previous interviews and raises again with National Observer. He talks about how Tesla began with an expensive product, but then made a break-through with its affordable car recently.

In the same way, Kemball-Cook declares that Pavgen is a disruptive company like Tesla. “We’re pioneering new energy.”

Pavegen’s newest tile does sound like the name you’d give to a car: the V3.

The triangular shaped V3 produces five watts of energy per step and 200 times more power than the previous Pavegen tiles. “With a thousand people, it’s obviously a thousand times the power. What you can actually produce en masse is huge,” Kemball-Cook says.

As people walk over a tile, the force of their footstep triggers a flywheel for 15 seconds. Every time the flywheel rotates, it generates energy from a set of copper magnets that produces an electro-magnetic charge.

Pavegen’s tiles do more than power lights. They can also gather data about people who walk over them thanks to a data transmitter that can wirelessly capture information from every footfall, including who is doing the walking.

The latter is part of an opt-in reward system, a form of “digital currency,” that the company is working on.

It’s all hush-hush, though. Throughout the interview, Kemball-Cook repeats, “I can’t go into too much detail about that at the moment.”

What is known is that Pavegen is working with Jeff Martin, a former executive at Apple who helped Steve Jobs on products like iMovie and iMac and who founded Tribal Planet, a mobile application company that motivates consumers to contribute to social causes in exchange for rewards.

And in May, Gizmag reported that Pavegen had teamed up with Tribal Planet to create a mobile app, that allows users to collect a digital currency every time they step on a tile and which they can trade for rewards or charitable donations.

“The ability for people to actually be rewarded for their footsteps at specific sites is incredibly exciting,” Kemball-Cook told National Observer.

Another segment of Pavegen’s business is powering advertising from footfalls. One possibility is that people would carry Pavegen’s app and as they walked past billboards. The latter would light up with targeted advertising. In return, the Pavegen users would receive a digital currency that they could apply toward rewards.

Kemball-Cook acknowledges they can target advertising to people as they walk past. Beyond that, he says, “The ability for people to generate energy and turn it into a revenue stream, get people generating as much energy as possible and engaging in the technology. We believe lots of brands will get behind this initiative.”

The tiles themselves are gaining ground. Pavegen has some 200 installations of varying size around the world with more on the way.

New installations include an array of about 100 tiles into Dupont Circle in front of the White House in Washington, which will power lighting and also have a data application, and an installation on Oxford Street in London.

Some 85,000 people a day walk along the latter street. “That’s when we see a huge amount of energy to harvest from people moving,” Kemball-Cook says.

An industrial engineer by training, Kemball-Cook developed the idea for Pavegen in his bedroom while he was still in university in 2009. At that time, some 150 investors turned him down, saying the idea would never work.

But once he was able to lay down his first tiles in London, investment began to flow into the company. More recently, Pavegen crowd-funded some two-million English pounds.

The latter is the network of objects containing software and sensors that enables them to remotely collect and exchange data.

Max Donelan, a professor of biomedical physiology and kinesiology at Simon Fraser University in Burnaby is an expert in the field of kinetic energy harvesting. He is the co-founder of Bionic Power. The company makes wearable technology for charging batteries.

Its current product is the PowerWalk Kinetic Energy Harvester for military use. In late May the company received US$1.25-million from the Office of the Secretary of Defense to supply PowerWalk units for field trials.

The PowerWalk is like something out of Avatar. It’s a light-weight, leg-mounted exoskeleton designed to accommodate a solder’s full range of motion while harvesting energy from the natural action of walking.

With every stride, the PowerWalk’s on-board microprocessors analyze the soldier’s gait using proprietary control software to determine precisely when to generate maximum power with the least amount of effort.

On level ground, the device requires minimal effort to harvest power and, while power generation is its main function, the PowerWalk also reduces muscle fatigue during downhill walking.

A soldier typically carries 16 to 20 pounds in batteries on a 72-hour mission. By generating power with PowerWalk, it not only reduces the weight soldiers must carry, but it means two-way radios, GPS systems and other military applications may be charged when they’re away from the base on extended missions.

Donelan questions the usefulness of Pavegen’s technology if it’s placed anywhere near where energy can be accessed from the grid. Donelan says he doesn’t expect people in Vancouver to walk around wearing PowerWalk to charge their cell phones because they can just plug them into the wall.

“When that’s not an option, that makes some sense. But in these cases when people talk about energy generating tiles, they’re usually talking about putting them in subways, in places where there’s a lot of foot traffic and there’s not a compelling financial reason to do so.”

While Donelan hasn’t walked on a Pavegen tile, he notes that because the action of the tile works from the force and compression of the step, it may create a sludgy feel for users as they pass over the tiles.

“The problem with that is the body is actually doing mechanical work on that tile, which it doesn’t get back,” Donelan explains, “so walking over this feels like you’re walking over sand.”

He notes in the past the Defense Advanced Research Projects Agency rejected an energy-harvesting boot for soldiers for that very reason.

“Utility might be gauged by how much money you might save or what you could really do with it,” Donelan says.

Outside of its digital currency ambitions, Pavegen’s actually done some interesting things with their tiles. For instance, in 2013, the company installed 178 tiles near the finish line of the Paris Marathon. From the footfalls of 40,000 runners crossing the line, Pavegen fed energy back into the grid.

In 2015, Pavegen installed 100 tiles on a football pitch in Lagos, Nigera. The feet of the soccer players power the floodlights for the arena.

In a video shot at the Paris Marathon on Pavegen’s website, Kemball-Cook talks about the inter-relationship Pavegen might have with the Internet of things. He believes a portion of energy will come from kinetic technologies such as Pavegen’s tiles, and its tiles will communicate with buildings, bridges, roads and pavements to provide power when its needed.

“We know our product isn’t something that’s going to power the whole world,” Kemball-Cook allows. But he says it offers people a tangible way to engage in sustainability.

“It’s one of the few ways of communicating to people through the medium of a floor. Never before has the floor been seen as anything more than something that has to look good and support peoples’ weight.

“It’s energy now and where you need it just from a single foot step.”