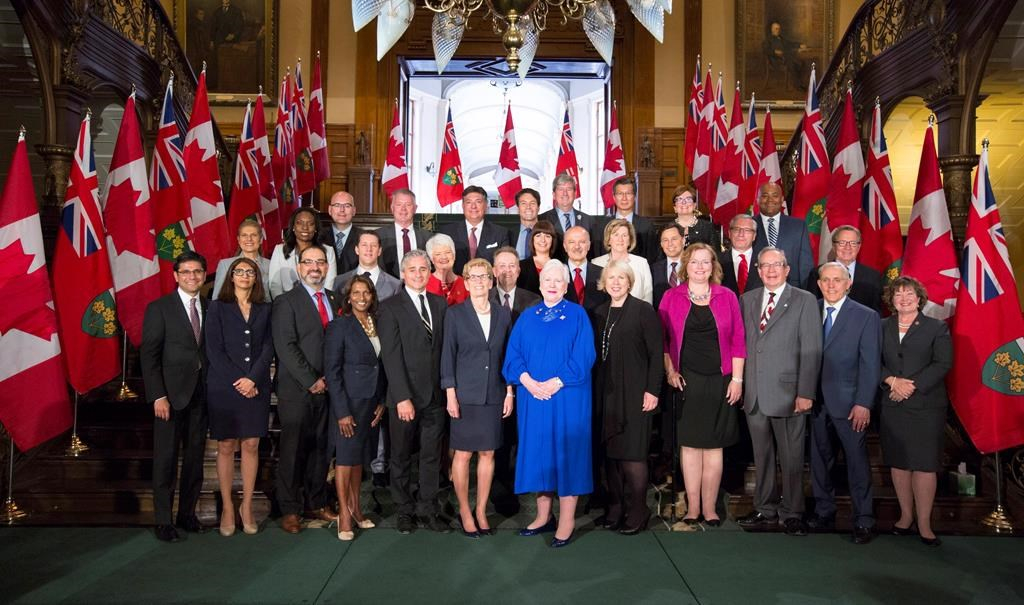 Ontario Premier Kathleen Wynne stands with her new cabinet in Toronto on June 13, 2016. Photo by The Canadian Press.
Previous story
Next story

Premier Kathleen Wynne promoted seven backbenchers to an expanded 30−seat Ontario cabinet table Monday while demoting the minister responsible for the autism file that created a public relations nightmare for her Liberal government.

Tracy MacCharles, who bore the brunt of parental anger over changes to autism therapy programs, lost her job as minister of children and youth services to be minister without portfolio responsible for women’s issues and accessibility.

Glenn Thibeault, the former New Democrat MP lured by Wynne to run as a provincial Liberal in a 2015 byelection in Sudbury, was rewarded for crossing party lines with the biggest promotion of the day to become Ontario’s energy minister.

Mitzie Hunter, who had been overseeing the new pension plan, is the new education minister, replacing Liz Sandals, who becomes president of the Treasury Board. Sandals came under fire for spending millions to cover some teachers’ unions’ negotiation costs, but ultimately reached central deals with them under a new bargaining framework, so her promotion to the office controlling the province’s purse strings is seen as a reward.

Yasir Naqvi was promoted to attorney general from Community Safety and Corrections, leaving that ministry in the midst of a major sector transformation. David Orazietti takes over that fraught file as the government also implements new carding regulations for police and is under pressure to ban or severely curb jail segregation.

Aside from Thibeault, other new faces in cabinet are: Eleanor McMahon in Tourism, Culture and Sport; Kathryn McGarry in Natural Resources and Forestry; Marie−France Lalonde in Consumer Services; Laura Albanese in Citizenship and Immigration; Chris Ballard in Housing; and Indira Naidoo−Harris as associate minister of finance responsible for the Ontario pension plan.

The cabinet shakeup comes with just two years until the next election in June 2018, as the Liberals shift from planning to implementing their $8.3 billion climate change action plan, a cap−and−trade scheme for polluters and a new Ontario pension plan.

"The plan is in place, and now, at the mid−point of our mandate, our focus is on implementing our plan so that we can continue to deliver on our top priority — creating jobs and growth," Wynne said at the swearing−in ceremony.

But the main demotion is that of MacCharles amid defunding of an intensive therapy for autistic kids over four.

Kristen Ellison, one of the parents who has spearheaded the protest movement, said she is unsure about Michael Coteau as MacCharles’ replacement, but hopes he brings change.

"Everybody deserves a chance and a bit of benefit of the doubt, so I will give him that, but I’m really hoping this will be their chance to really make it right," Ellison said.

"It would have been very hard for Tracy MacCharles to stand up and say, ’We’re doing a reversal,’ or ’We’re changing our plan,’ after they sold it for so long."

"Putting a cabinet together is one of the most personally difficult tasks required of a premier, and I can tell you — as I name my third cabinet — it does not get easier," she said.

Chiarelli advised his successor in Energy to remember that electricity generation is a complicated business.

"I think the biggest advice is to look at the system and realize that it’s like a Rubik’s cube: you make a decision in one aspect of the energy sector, and it impacts everything else," Chiarelli said. "I hope he’s good at puzzles."