How the B.C. government responded, one week late, to being called a "climate laggard" 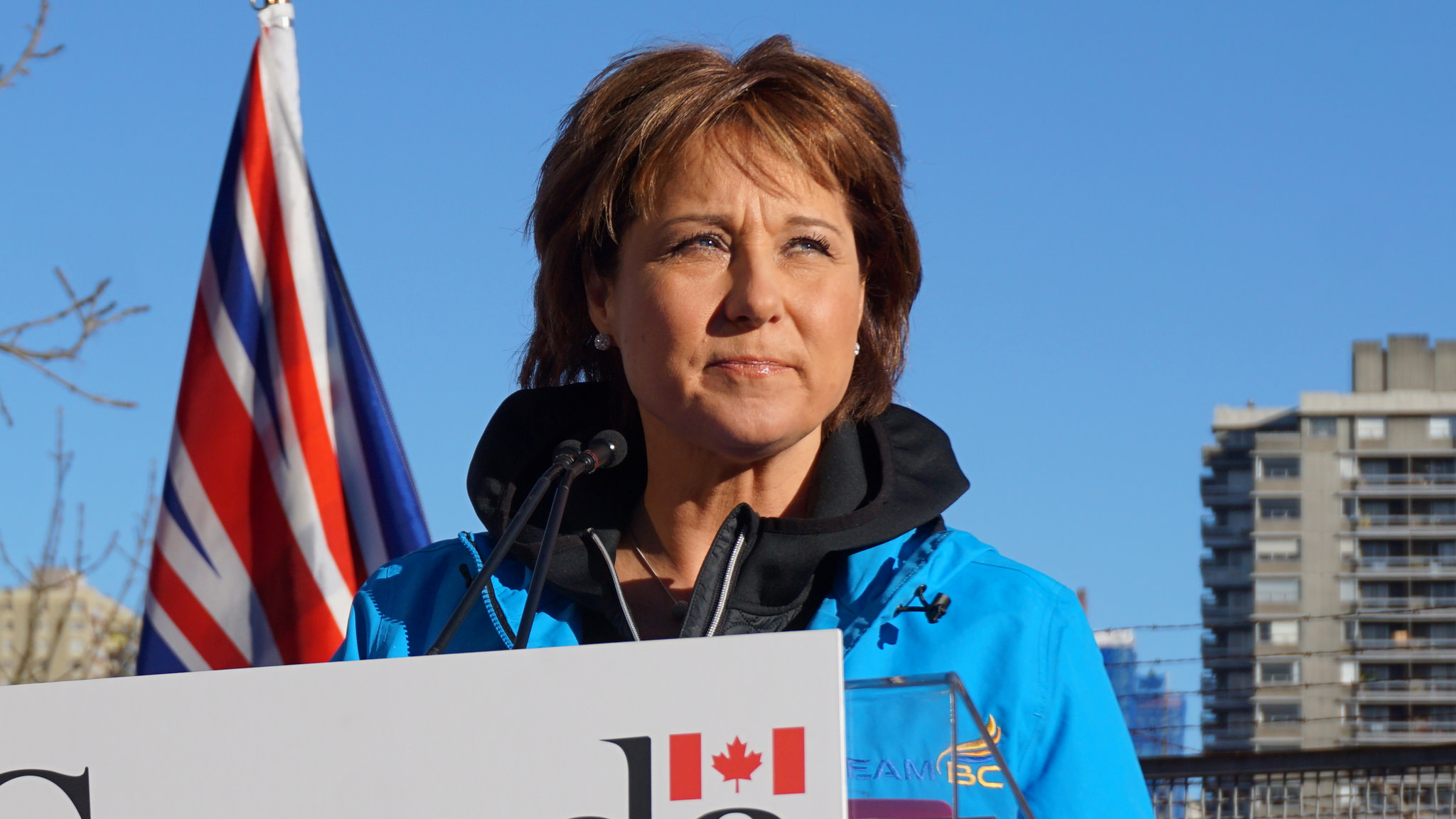 As a new report from the Pembina Institute finds British Columbia trailing behind Canada's other most populous provinces on climate action, the B.C. government is firmly rejecting accusations from the BC Green Party that it is indeed, a "climate laggard."

Its Ministry of Environment responded Tuesday to a week-old media request from National Observer for comment on a scathing blog post published by BC Green leader Andrew Weaver earlier this month. The post accused Premier Christy Clark's administration of tearing apart the climate legacy of predecessor Gordon Campbell by adjusting landmark policies like the 2010 Clean Energy Act and failing to renew the LiveSmart BC program, which offered incentives for homeowners to become energy efficient.

Weaver published a list of eight ways the government has slipped from the graces of climate leadership, half of which the ministry whole-heartedly denied, and half of which it admitted were true, sort of. The answers tip-toed the lines of true and false by playing with the semantics of Weaver's statements.

A game of true and false

When asked, for example, whether it had stopped increasing the carbon tax, it responded that the claim was "false." All scheduled increases to the carbon tax were implemented through 2012, it explained, but "in 2013, the government committed to freezing the carbon tax at $30 per tonne for five years, to allow other jurisdictions to catch up."

The answer would appear to contradict itself, but Josha MacNab, B.C. director of the Pembina Institute, offered some interpretation: it's true that the B.C. government had no more increases it could stop without creating new legislation, but it's also true that the end result was that carbon tax increases came to a halt.

“This is completely semantics," she told National Observer. "The reality is that the B.C. government failed to continue to increase the carbon tax, even when it proved to be an effective policy."

A second example of such "semantics" included the government's response to Weaver's allegations that emissions have increased every year since Clark was elected in 2011. Carbon emissions will go "up and down" depending on economic activity, weather, and other factors, the ministry wrote, but "total greenhouse gas emissions in British Columbia have dropped 5.5 per cent since 2007."

Once again, both are true, sort of.

“The net result is that in 2005, we were at 65 megatonnes and in 2014, we were at 64 megatonnes, so technically speaking that is actually correct," MacNab explained. "But what they failed to mention by giving you that statistic is that we were on a downward trajectory because of the climate action that was put in place, and because they stalled on climate action around 2012, we started seeing those emissions increase again.”

While the end result is that the emissions decreased, she said, they had actually crept up year by year, but not to a total that exceeded levels in 2007. MacNab wouldn't speculate on the reason behind the government's cryptic responses, but Weaver certainly did.

“They’re in full-fledged communications damage control right now," he told National Observer. “This response is pretty shameful. It’s spin. We cannot make the 2020 climate target and the reason why is because the government chose to do nothing post-2012 and took steps to repeal the climate legislation that's out there."

Indeed, the Pembina Institute published new findings on Tuesday indicating that carbon emissions in B.C. are rising too quickly for the province to meet its 2020 goal of cutting emissions by 33 per cent below current levels — a finding that effectively challenges the provincial government's claim to being "world leader" in climate action. Of Canada's four most populous provinces (Alberta, Ontario, Quebec, and B.C.), it wrote that B.C. is the only one projected to see an increase in carbon pollution by 2030 by a margin of no less than 39 per cent.

The other three, in contrast, are expected to drop their emissions 26, 22 and 23 per cent respectively. 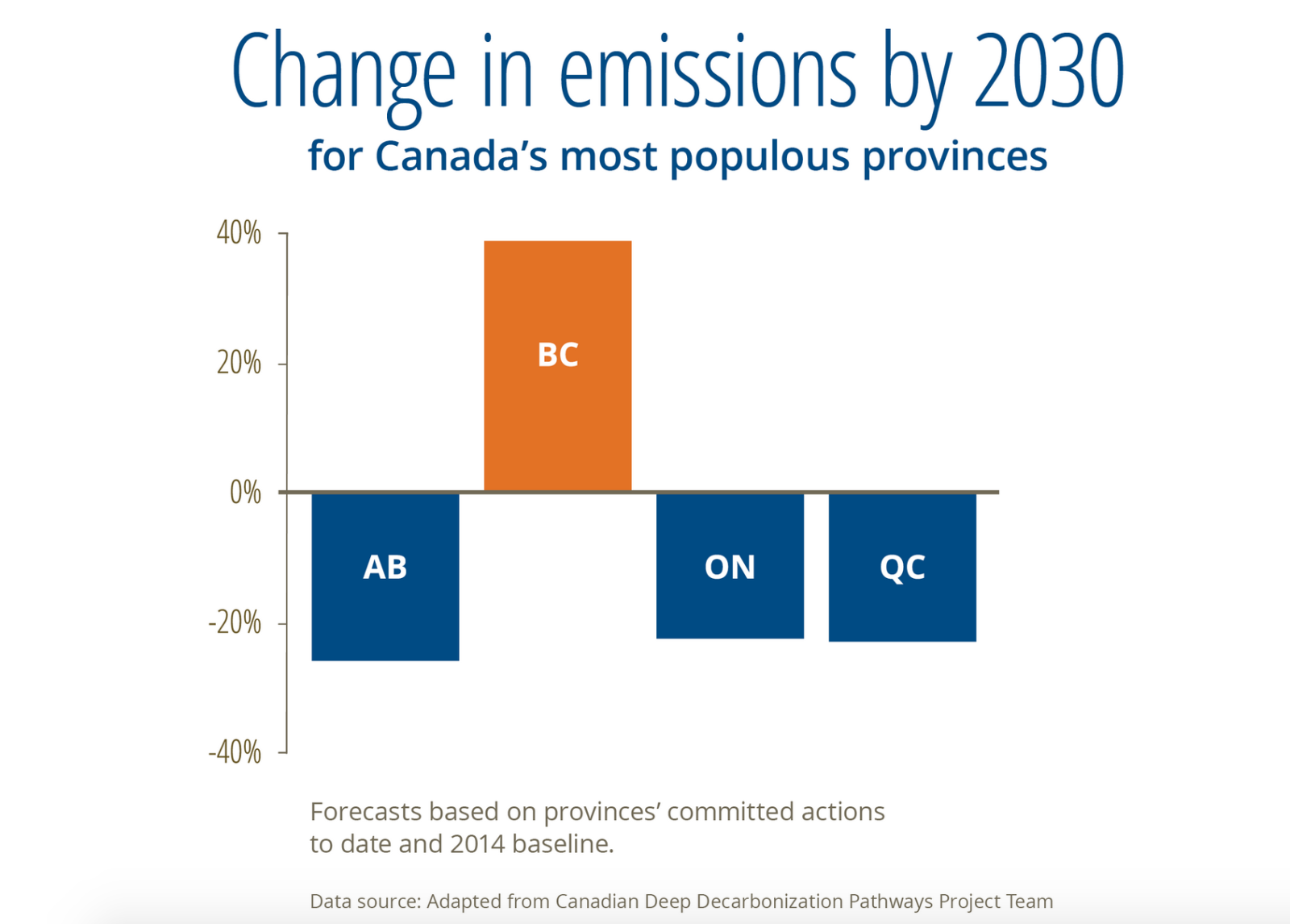 British Columbia is on track to increase its emissions by up to 39 per cent by 2030, a contrast to Alberta, Ontario, and Quebec's projected decreases of 26, 22 and 23 per cent, respectively. Graphic by the Pembina Institute.

"No excuse" for the provincial government

In its response to National Observer, the Ministry of Environment indicated that this allegation is actually true. It did however, blame that failure foremost on the "failure of many other jurisdictions to bring online their promised carbon pricing mechanisms that would have reduced competitiveness and affordability issues for British Columbia under our revenue neutral carbon tax."

“There’s no excuse for B.C. to be falling behind at this point," said MacNab. “They had a legislated target that they should have been holding themselves accountable to, and their failure to implement policies that would put us on a trajectory to meet that target is a failure of accountability.”

The government further ignored National Observer's question about being called a "climate laggard" by Weaver, and focused on the new initiatives it perceives as making up for the environmental policies it has cancelled, including the Pacific Carbon Trust, cap and trade-enabling legislation, and the LiveSmart BC program.

“The fact is that the cap and trade-enabling legislation was repealed," said Weaver. "There’s no arguing that. They talk about it being replaced with the more comprehensive Industrial Reporting and Control Act — it may be more complex, but it actually moves us to an emissions intensity framework."

It's all about a communications plan, he added, and not about substantive climate policies.

The BC Liberals will release its Climate Leadership Plan by the end of the month, including efforts to make LNG development more sustainable. According to its email to National Observer, it may also consider hiking carbon taxes once again in 2018, as long as:

"Revenue-neutrality must be maintained, an increased carbon tax must be affordable by British Columbia families, there has to be a mechanism in place to keep industries that are emission-intensive and trade-exposed competitive with other jurisdictions, and the competitiveness of BC businesses has to be maintained."

"The BC Liberals will release

"The BC Liberals will release its Climate Leadership Plan by the end of the month, including efforts to make LNG development more sustainable. "

LNG is just another fossil fuel; it is not being replaced at any significant rate in today's world. Talking about "sustainable development" of any fossil fuel - while continuing to extract and consume it - is an oxymoron, proposed only by the other kind of moron.

Human beings will need whatever is left of those fossil fuels a whole lot more when - not if - the Milankovitch cycle eventually reasserts itself and Planet Earth heads into its next Ice Age (That's if - not when - there are any human beings surviving on this planet at all.)

Though I am grateful for the

Though I am grateful for the blessings of wealth, it hasn't changed who I am. My feet are still on the ground. I'm just wearing better shoes.