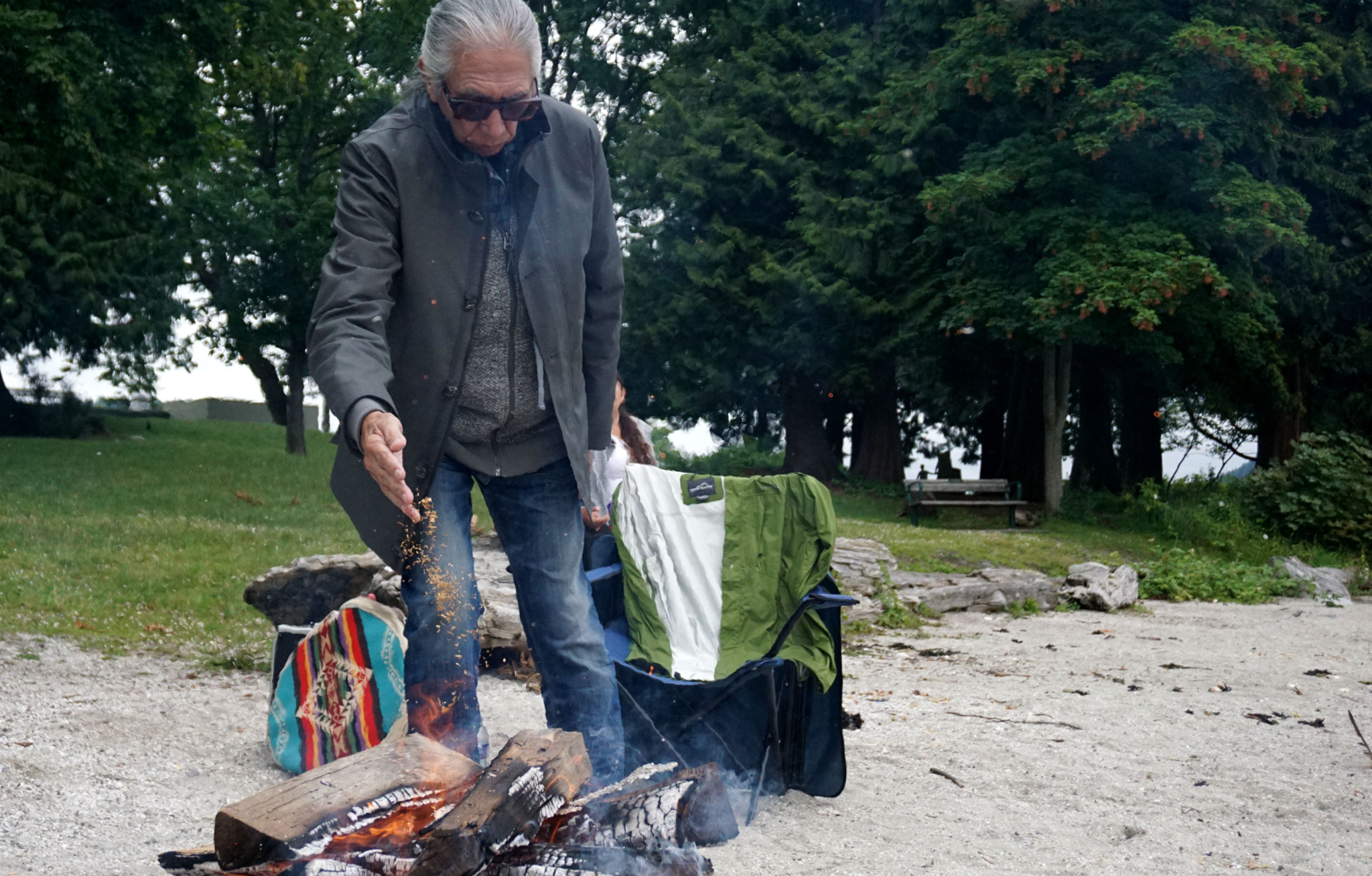 It was a simple ceremony. There were no crowds, no cameras, no speeches — only Tsleil-Waututh Elder Leonard George in his sleek grey jacket, shades, and Converse sneakers.

Eyes closed, he whispered a few words, raised his hands, and tossed a handful of dried sage over a crackling fire. The flames rose and he sat back down in his camping chair. He prayed to his ancestors for the protection of Mother Earth, her land and water.

It's an old ritual, he told me, one that has existed for thousands of years "since the first people came to Earth." But the subject of his prayers — protecting British Columbia's beautiful Burrard Inlet from the impacts of oilsands expansion — is a relatively new one.

Today, Kinder Morgan's Trans Mountain pipeline expansion, currently under federal review, threatens to increase tanker traffic through these waters nearly seven-fold, increasing the risk of a catastrophic oil spill by 600 per cent. Elder George has lived along the shores of the inlet his entire life, and even on National Aboriginal Day — a day to celebrate vibrant Indigenous culture and tradition — he is making a political statement.

“The damage has been done," he said by the sacred fire at Whey-ah-Wichen (Cate's Park), in the heart of traditional Tsleil-Waututh territory in North Vancouver, B.C.

"If the pipeline goes through, the inlet will become a dead zone and that contamination will effect the Georgia Straight, the salmon run and our food source. We’re trying to save it not only for ourselves but for mankind."

Friends and family gathered around him to offer their own prayers for protection of the coastline, tossing sweet grass and tobacco into the flames. Some huddled on blankets spread out over the sand, and others sat on logs at the edge of the beach.

It was quiet, unlike many other National Aboriginal Day celebrations taking place across the country on Tuesday.

"This is the way we honour where we are, who we are, and what we are," said Tsleil-Waututh Councillor Charlene Aleck. "In everything we do it’s a sustainable way of living, and we’re even putting our prayers out there for the ones who work at the Kinder Morgan terminal, and own the company and make those decisions.

"We hope the prayers will open up their hearts to see what the struggle is for the inlet, not just us, but for the inlet."

A celebration of pluralism

National Aboriginal Day is celebrated annually on June 21, the summer solstice, to honour rich Indigenous heritage in Canada, including distinct language, cultural practices, and spiritual beliefs. But as friends and family — diverse in age and ethnic background — gathered at the beach for the sacred fire ceremony, both Elder George and Aleck acknowledged that it's also a celebration of Canadian diversity.

In their lifetime, both would like to see it become a statutory holiday so that all Canadians, Indigenous and non-Indigenous, can take the time off to discover and appreciate one another's heritage.

"Our paths are all very similar," said Elder George.

"It’s recognizing that we’re all human, we all have parts, and spirits," Aleck agreed, adding that the diverse audience of the sacred fire ceremony is a "step in the right direction."

The federal government too, has taken several "steps in the right direction" over the last nine months, she said, but on Tuesday, many politicians outlined that they still have a long way to go.

"No relationship is more important to our government"

Since the federal election last October, Canada has endorsed the United Nations Declaration on the Rights of Indigenous Peoples, promised full federal action on last year's Truth and Reconciliation Commission report, and unequivocally vowed that it will take part in nation-to-nation relations with Indigenous governments. It has appointed an Indigenous justice minister, launched a federal inquiry into missing and murdered Indigenous women and girls, and brought a record 10 Indigenous MPs into the House of Commons.

On Tuesday, Prime Minister Justin Trudeau reaffirmed that "no relationship is more important to our government" than its relationship with Indigenous people, but also acknowledged that Ottawa still has a long walk ahead on the path of reconciliation.

"Events over the past few months – including the loss of life to suicide and the feelings of despair felt in some communities – remind us that we must work in genuine partnership with Indigenous peoples, the provinces, and the territories to better support the well-being of children and families, improve the quality of education for Indigenous students, and ensure health services meet the needs of Indigenous communities," he said in a statement after an early morning paddle to mark the special event.

"We will continue the vital work of reconciliation as outlined in the Truth and Reconciliation Commission Calls to Action, in partnership with First Nations, the Métis Nation, the Inuit, the provinces, and the territories."

His renewed commitment was echoed by both federal NDP and Green parties, which pointed to the "urgent work we have ahead," and the "great challenges" Canada faces, respectively, in reconciling with Indigenous people across the country. Clean water infrastructure, education and health care were highlighted as priorities.

"The legacy of residential schools and the inter-generational pain it caused will not be healed overnight," said Green Party leader Elizabeth May in a press release. "We must be committed to truly staying the course, respecting First Nations on a nation-to-nation basis, and acknowledging the constitutional rights of Inuit and Métis peoples."

"It is well past the time for us as a country to take more than just one more attempt at a first step forward," said a statement from the NDP. "As a country we must meet the call of Indigenous youth who are demanding a better future with meaningful action now."

The greater damage and

The greater damage and relationship with the aboriginals was not so much through the residential schools, although it played a very important part. It was at the beginning of the arrival of Europeans in North America and the European way of property ownership which resulted in excluding the aboriginals from owning land and taking over hunting and fishing areas and the introduction of reserves. That in my opinion was and is the real damage