Home is where the power is: Indigenous communities could lead off-grid clean energy push 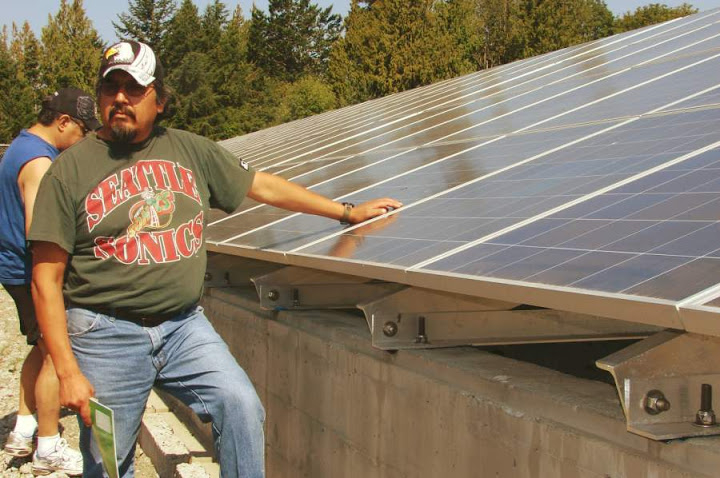 Technology is disrupting the energy system. As the cost of clean energy continues to fall, Canada’s approximately 300 off-grid communities could lead the rest of Canada in demonstrating how to build renewable energy systems for the future. Instead of flying or trucking in heavily subsidized and hazardous diesel fuel for generators, these mostly Indigenous communities could be running on clean power and creating skilled jobs around microgrid management and associated business applications.

Microgrids are energy systems consisting of distributed energy sources like wind, solar, small hydro and geothermal. Local users are responsible for demand management, storage, and generation, and the power systems run independently or alongside back-up solid fuel generators. The US states of California and New York are now driving the development of large, sophisticated microgrid systems for a transition to renewable energy. For smaller off-grid Indigenous communities in Canada, the build out of renewable energy would help to ensure local, reliable, and affordable heat and power. And it is not just about electricity and heat. Energy constraints have been a significant barrier to executing vital water system upgrades required in many communities.

The current system of reliance on diesel generators is costly from a direct subsidy perspective. The annual cost of funding diesel generation in Ontario’s remote communities is estimated at $90 million annually. The economics of diesel look even worse when environmental and health costs are factored in. There is a constant risk of in-situ diesel spills in communities as well as in transit which can lead to soil and water contamination. Spills are costly to clean up and contamination can be long term. In the community of Attawapiskat, a 30,000 gallon fuel spill in 1979 under their elementary school has been only one of many. Shifting the primary power supply from diesel to clean energy systems would reduce these significant risks and associated costs.

High delivery costs and the need to subsidize the supply chain and the fuel itself mean reductions in community budgets for education, health, and business development. The high cost of generator maintenance and replacement, as well as power capacity limits, all stunt local economic growth potential in remote communities. By contrast, after renewable power infrastructure is built, energy inputs are free, and the system can easily grow alongside community energy needs. Once the right locations are selected, sun, wind, and geothermal energy are freely available. The development, maintenance and expansion of microgrid renewable systems create employment and new business opportunities, and community members can actually own their energy infrastructure.

A number of communities across Canada are already building out microgrid renewable systems. Colville Lake in the Northwest Territories has piloted a combined solar panel and battery unit that will enable the community to run entirely on the sun’s energy during summer months. In northern Ontario, Canadian Solar has installed a hybrid solar system and diesel back-up capacity with the Deer Lake First Nation. In Nunavik, Quebec, a wind turbine installed at the Raglan Mine offset the use of 3.3. million litres of diesel fuel in its first 18 months of operation. As more off-grid communities and companies explore solutions, all levels of government should support a rapid transition to renewable energy systems and the associated job creation opportunities.

Canadian policy makers can also look to Alaska for evidence of the cost savings and effectiveness of renewable energy systems. The state’s renewable energy investment fund tracks annual cost savings from avoided diesel fuel use. As a result of the transition to distributed clean energy systems, it reported saving approximately 75 million litres of diesel fuel in 2015, up from 57 million litres in 2014. Across the Pacific, Japan has pioneered microgrid development on remote island communities in the archipelago. As the United States and Europe both scale up the use of microgrids within their power systems, Canada should be leading the roll out of microgrid technology in partnership with interested Indigenous communities.

Building on a 2015 report from the MaRS Advanced Energy Centre, WWF Canada published analysis last month on renewable energy opportunities in Nunavut. The conclusion is clear: government and university researchers should be helping to map available renewable resources in off-grid communities. Governments and our commercial banks could then provide streamlined financing tools for the initial infrastructure build out.

With more mature technology, there is now a perfect opportunity for Canada’s off-grid indigenous communities to lead our country towards a 21st century distributed energy system. With the right support, Canada’s Indigenous landowners could be innovating and testing new microgrid models incorporating wind, solar, and geothermal energy. Many of the country’s 300 off-grid communities are desperate for cleaner, healthier, and safer heat and power sources. Action would benefit the entire country, spur innovation and create jobs, and begin to address pressing human rights challenges. Happy National Aboriginal Day.