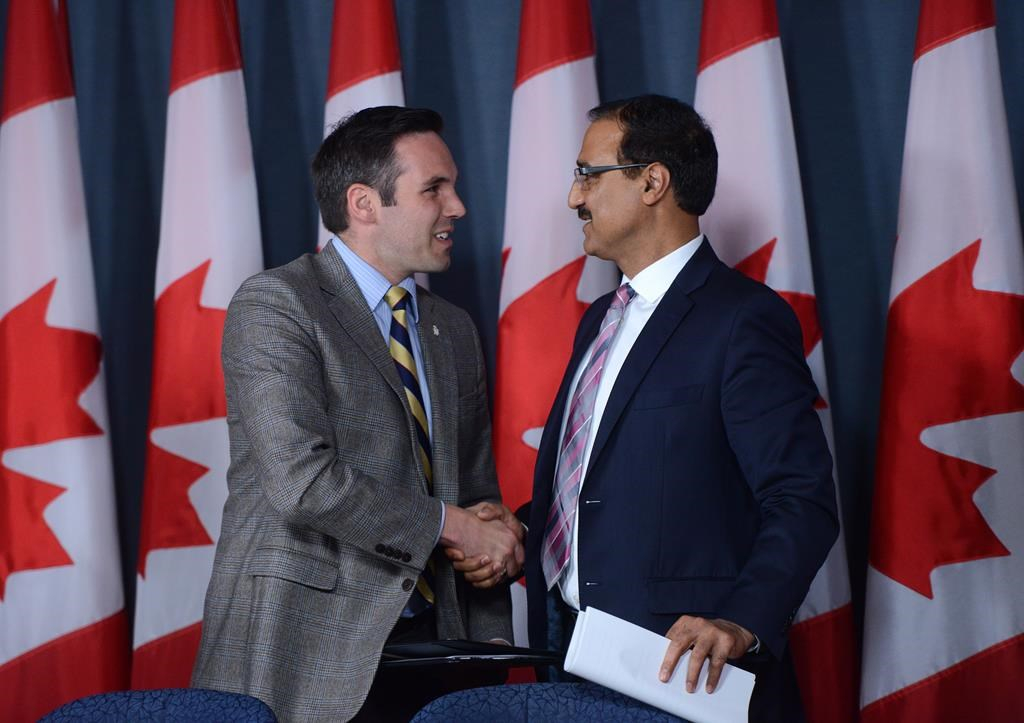 Minister of Infrastructure Amarjeet Sohi and Yukon community services minister Currie Dixon shake hands after signing an agreement to give federal funding to the Yukon territory for infrastructure on June 22, 2016 in Ottawa. Photo by The Canadian Press.
Previous story
Next story

The federal infrastructure minister signalled Wednesday that new and stagnant federal funds for construction projects will soon flow out of the federal treasury in large volumes.

Amarjeet Sohi said several large projects are set to receive infrastructure money left over from a fund set up by the previous Conservative government, part of a restructuring of the program that has seen the Liberals approve 164 projects since taking office in November.

The federal government is set to sign funding agreements with more provinces and territories in the coming days that will see billions in new infrastructure money begin to flow to projects, with major announcements to start early next week.

What it means is that the federal government will be paying for more of the bills arising from the summer construction season that is well underway in parts of the country and help cities, provinces and territories cover the cost of planning for work in 2017.

"We are ready to proceed with any other province or territory that is ready to sign," Sohi said.

Quebec has publicly complained about the pace of negotiations and suggested federal funds won’t come fast enough for this construction season, despite pledges from Ottawa to the opposite effect.

Sohi would only say that he expected a deal soon with Quebec and officials are looking at ways to quickly shift leftover money from years−old infrastructure programs started in 2007 to new construction work.

That is what happened in talks with the Yukon government. The federal government made it simpler for the territory to apply for funding under one stream of the Conservative infrastructure fund, rather than having to fight more populated provinces for cash under streams aimed at larger, national projects.

The agreement unveiled Wednesday will allow almost $52.3 million in infrastructure money to flow to 22 projects in the Yukon this year and next.

The deal will cover $890,000 for transit work in Whitehorse and green infrastructure work on water and wastewater systems, including a $5.25 million water project in the village of Mayo.

Only two of the 22 projects will have shovels in the ground this year, Dixon said, with the remainder beginning construction in 2017. The territory will spend money this year on engineering and design work, he said.

The territory’s MP said that the money will go a long way in remote parts of Yukon, where remote communities rely on antiquated wooden water pipes.

"Some of them don’t have access to clean drinking water all the time and their sewer systems don’t work," said Liberal MP Larry Bagnell.

A funding agreement signed last week with British Columbia only covered funding for transit projects. A similar agreement for green infrastructure is in the works.