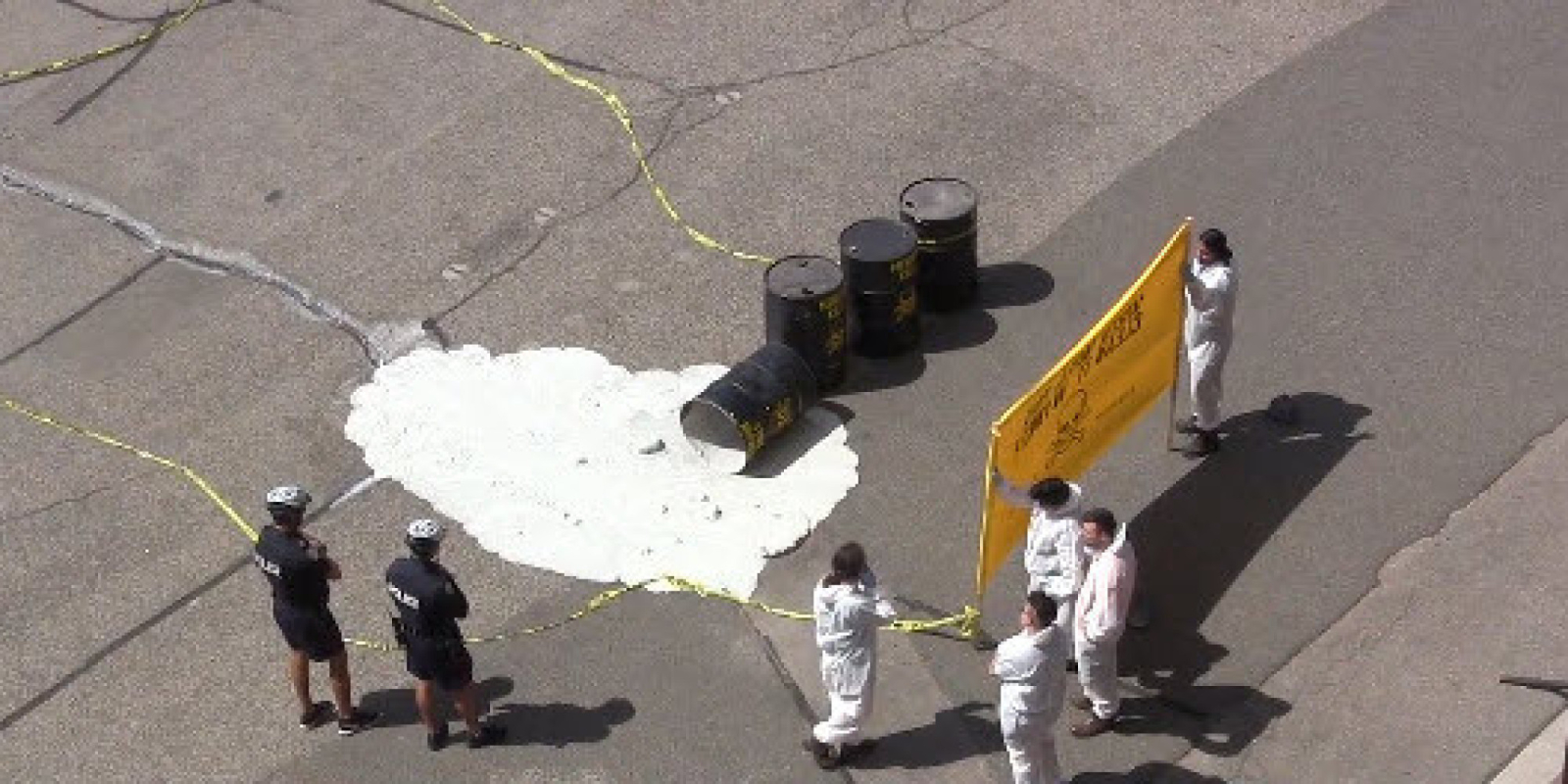 Protestors dump a mysterious liquid out in front of the Ontario legislature in Toronto on June 23, 2016. File photo by The Associated Press.
Previous story
Next story

Premier Kathleen Wynne insists she’s "deadly serious" about wanting to clean up the mercury contamination that has plagued the Grassy Narrows First Nation for decades, but doesn’t want to make the situation worse.

Two Ontario cabinet ministers travelled to the remote community north of Kenora Monday to talk with local leaders about a recent report that concluded it was possible to clean up the mercury in the English and Wabigoon River systems.

A chemical plant in Dryden dumped 9,000 kilograms of mercury in local waterways in the 1960s, but the report found levels remain dangerously high even though the plant closed in the 1970s, and suggested there may be an ongoing source of contamination.

"I am willing to look for ways to remediate the situation if that is at all possible," Wynne said Monday. "I am deadly serious about this. I want this to happen, but I am not going to go ahead unless we’re sure that we’re not going to do more damage."

The government fears remediation efforts could make things worse by stirring up more of the mercury trapped in the sediment of rivers and lakes.

For now, the province will follow the report’s recommendations and do more studies while also looking for the suspected ongoing source of mercury pollution.

"I committed that we would engage in the field studies that are recommended by the recent report on potential remediation at Grassy Narrows," Wynne said. "As part of the field studies, if there’s the ability to find that source, then we obviously we do that."

Green Party of Ontario Leader Mike Schreiner said the province cannot continue to "drag its feet" on the issue because people’s lives are at stake.

"This cannot be a public relations exercise," he said.

"Real, concrete steps must be taken."

Meanwhile, a Grassy Narrows family wrote Wynne asking for a coroner’s inquest into the suicide of 14−year−old Azraya Ackabee−Kokopenace, who took her life after the death of her brother Calvin, 17, who suffered from mercury poisoning and muscular dystrophy.

In April, Azraya was out past curfew at the group home where she lived, was picked up by police and dropped at the Kenora hospital, where she walked away around midnight. Two days later she was found dead in the woods across the road from the hospital.

"The same system that took her out of her community and away from her family is the system that failed her," Marlin Kokopenace, Azraya’s father, said in a release.

"We want that system held accountable, and we want it to change."

New Democrat MPP Sarah Campbell also urged Wynne to call a coroner’s inquest, saying the death has left Azraya’s family and the community with many questions.

"It is heartbreaking for any parent to know that their child can simply walk away, never to be seen alive again, when they were supposedly in the care of child services and the hospital," wrote Campbell. "I cannot begin to understand what the community and her loved ones are feeling right now.

But Wynne said it wasn’t up to her to call an inquest.

"We don’t direct the coroner. The coroner will make that decision," she said. "These are tragic, tragic situations, and I don’t think there’s any other way to describe that."