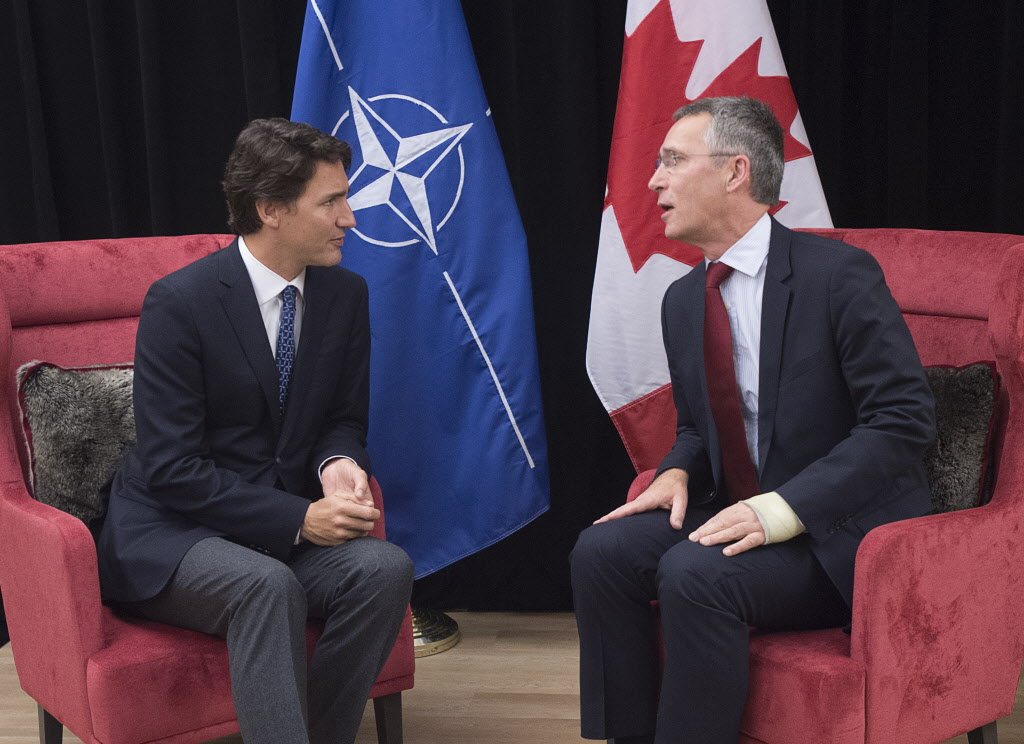 Prime Minister Justin Trudeau defended Canada’s record on military spending Tuesday, saying the country has consistently shouldered a heavier burden than many of its allies when it counts the most.

NATO reported this week that Canadian defence spending in 2015 hit levels not seen in decades, falling to 0.98 per cent of gross domestic product. That is less than half the two per cent of GDP target that all NATO members, including Canada, agreed to in 2014.

But documents obtained by the Canadian Press show the previous Conservative government never actually committed to meet that NATO target, which would equate to about $40 billion a year.

Instead, the Conservatives quietly pushed the alliance to recognize other "outputs" from Canada such as the contributions it has made to both NATO and non−NATO missions around the world.

Trudeau appeared to be picking up on that theme during a news conference after an unrelated announcement in Montreal.

He was asked whether he would commit to the two per cent target when he meets with other NATO leaders in Poland later this week.

Trudeau didn’t respond directly. Instead, he pointed to the government’s announcement last week that Canada will take a leadership role in a new multinational force in Eastern Europe as the latest example of the country pulling its weight.

"We have always stepped up well above many other NATO partners to engage, and that’s actually highlighted by our engagement around Operation Reassurance," Trudeau said.

Canadian troops are expected to be deployed to Latvia, where they will make up the majority of a 1,000−strong battalion that serve as a deterrent against Russian aggression. Germany, the U.K. and the U.S. will lead similar units in Lithuania, Estonia and Poland.

"We continue to be a valued and valuable partner in NATO," Trudeau added, "and I look forward to productive discussions in Warsaw with our NATO partners about how Canada can continue to contribute to peace and security in the world."

All NATO countries, including Canada, agreed in 2014 to stop cutting military budgets and work towards spending two per cent of GDP on defence. The goal was intended to ensure all alliance members were doing their fair share, which includes investing enough to field a modern military.

The target has taken on added importance following Russia’s own military buildup, and criticisms from some U.S. senators and Republic presidential hopeful Donald Trump about NATO members not pulling their weight. Obama also raised the issue in his address to Parliament last week.

NATO estimates Canadian defence spending will increase slightly this year, to 0.99 per cent of GDP. However, that will still leave Canada 23rd out of 28 NATO members.

The previous Conservative government also tried to defend against criticism of Canada’s defence spending by pointing to its contributions to operations overseas, according to a briefing note prepared for Trudeau last November and obtained through access to information law.

Canada wanted a "qualitative assessment of defence contributions based on ’outputs’ and did not commit to achieving a fixed target of two per cent of GDP," the note reads.

"Instead, Canada expressed a commitment to continue to develop its national capabilities and to contribute as full partners in NATO missions as well as non−NATO missions with our NATO allies."

However, he also didn’t believe it’s possible to maintain an effective, state−of−the−art Canadian Armed Forces at the current spending levels.