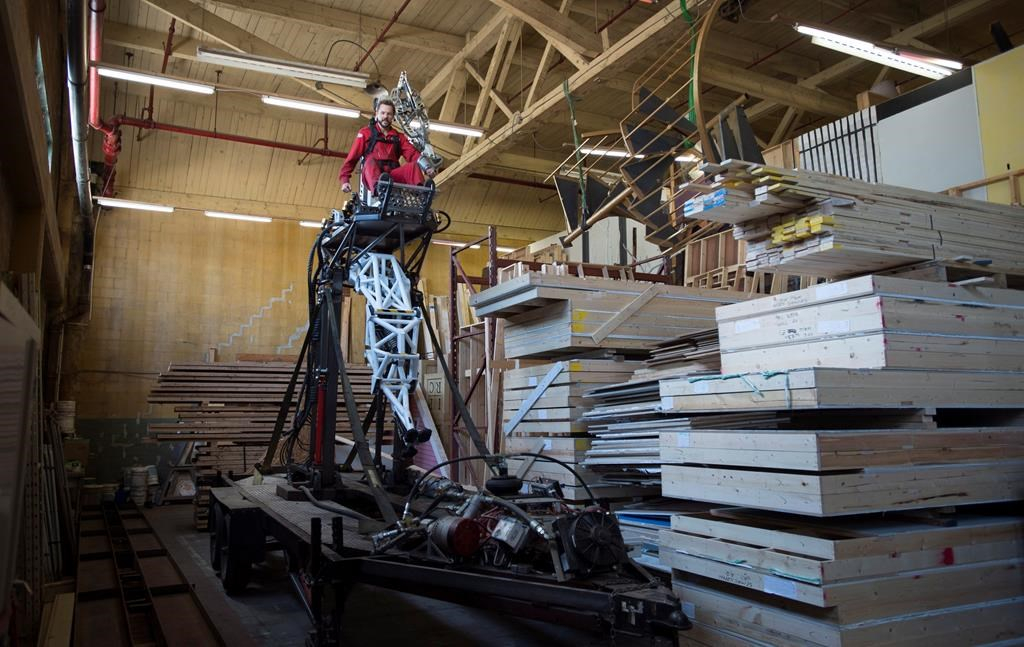 Engineer Jonathan Tippet sits atop a prototype of Prosthesis, a piloted racing robot, in Vancouver on July 6, 2016. Photo by The Canadian Press.
Previous story
Next story

Inside a warehouse in a secluded part of Vancouver, engineers and fabricators are building a two−storey tall, 3.5 tonne racing robot with four steel legs and a massive battery pack in its belly.

But unlike robots in science fiction, this mechanical beast won’t be autonomous. "Prosthesis: the anti−robot" needs a human inside to operate its colossal limbs.

Its creator, Jonathan Tippett, views Prosthesis as a metaphor for the importance of keeping people at the heart of technology.

"Visually and physically it’s this fragile human in the centre of this super−powerful, monstrous machine that is completely dormant without the pilot’s will, which I think is how our relationship should remain with our technology," said Tippett, 42, a mechanical engineer and sculptor.

When Prosthesis is complete, it will look like a hefty, animal−shaped cage that could have featured in the blockbuster "Avatar." A person will strap into a harness inside its enormous torso and move their arms and legs to manoeuvre the exoskeleton as an extension of themselves.

Prosthesis will offer a "new human experience" and serve as a counterpoint to the trend of automating everything from vacuums to weapons of war, Tippett said.

"This machine is completely immobile unless you pilot it. It has no self−awareness," said Tippett, explaining that the pilot will squeeze grips to operate its hydraulics.

"You would stand up two storeys in the air and do a little squat jump and leap into the racetrack ahead of you, and become completely responsible for every move."

Tippett was inspired by an art installation he spotted 13 years ago at the Burning Man festival in Nevada, a pair of giant dinosaur legs made of welded car parts. The idea got him hooked on building a walking machine he could control with his body.

He drew a first sketch in 2006 and launched the project in 2010. Since then, hundreds of people have been involved in every stage of the design, testing and construction, which Tippett almost solely funded himself.

Engineering students at the University of British Columbia have also contributed as their capstone project.

Tippett’s core team is now building the final machine — slated to be unveiled in January — after spending four years developing a prototype of its leg that is scaled to two−thirds of its full size.

The wearable machine is the antithesis of the kind of robots that leading scientists have warned against as they worry about an arms race in artificial intelligence. Scientist Stephen Hawking and Tesla founder Elon Musk were among hundreds of scientists and tech experts who last year signed an open letter arguing against autonomous weapons, fearing they would fall into the hands of terrorists, dictators and warlords.

"I always say that your car isn’t really anything to you until you give it a name, and then you remember every adventure that you have in it," Badminton said. "You jump in Prosthesis and together you are what that machine is. That symbiotic relationship is really important going forward."

He fears the sprint for progress means researchers are brushing aside conversations about how much faith humanity should put in technology. In Prosthesis, the individual is not only master but its "ethical barometer," said Badminton.

"Whether we have household robots of autonomous cars, it’s going to be important to give them some of our personality," he said. "Or we’re going to actually lose that element of humanity ... and we end up becoming the machine ourselves."

Tippett also hopes society will reject the seductive promise of an effortless life through artificial intelligence.

"Even if it’s not the rise of the machines like in Terminator, it will be the withering of the human spirit, because there is nothing left for us to do," he said. "There are so many ways to fulfil yourself as a human being. Most of them revolve around earned experiences that have challenges."