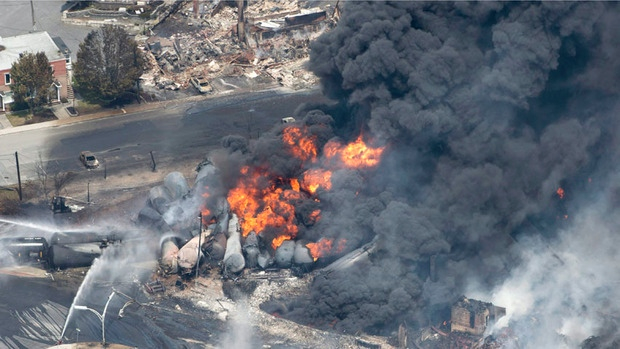 Derailed cars carrying crude oil erupt in flames during the Lac-Mégantic disaster in Quebec in July 2013. Photo by The Canadian Press.
Previous story

Some Lac−Megantic residents marked the third anniversary of the train derailment that killed 47 people three years ago by renewing their calls for increased rail safety.

A few dozen people gathered in nearby Nantes, near where the train began its downward descent into Lac−Megantic on July 6, 2013, before it derailed and exploded.

A spokesman for a rail−safety coalition said the group wants the federal government to commit to building track that would bypass Lac−Megantic.

Prime Minister Justin Trudeau issued a statement Wednesday to say rail safety remains a priority for his government but there was no reference to the citizens’ request for a track bypass.

"In the face of unimaginable pain and loss, the people of Lac−Megantic have shown incredible resilience and courage."

The train was carrying crude oil and the tragedy led to tougher government regulations with regard to the transport of oil by rail.

Three men, including the train’s conductor, are each facing 47 counts of criminal negligence causing death.

The scary truth about "bomb trains" moving through your town