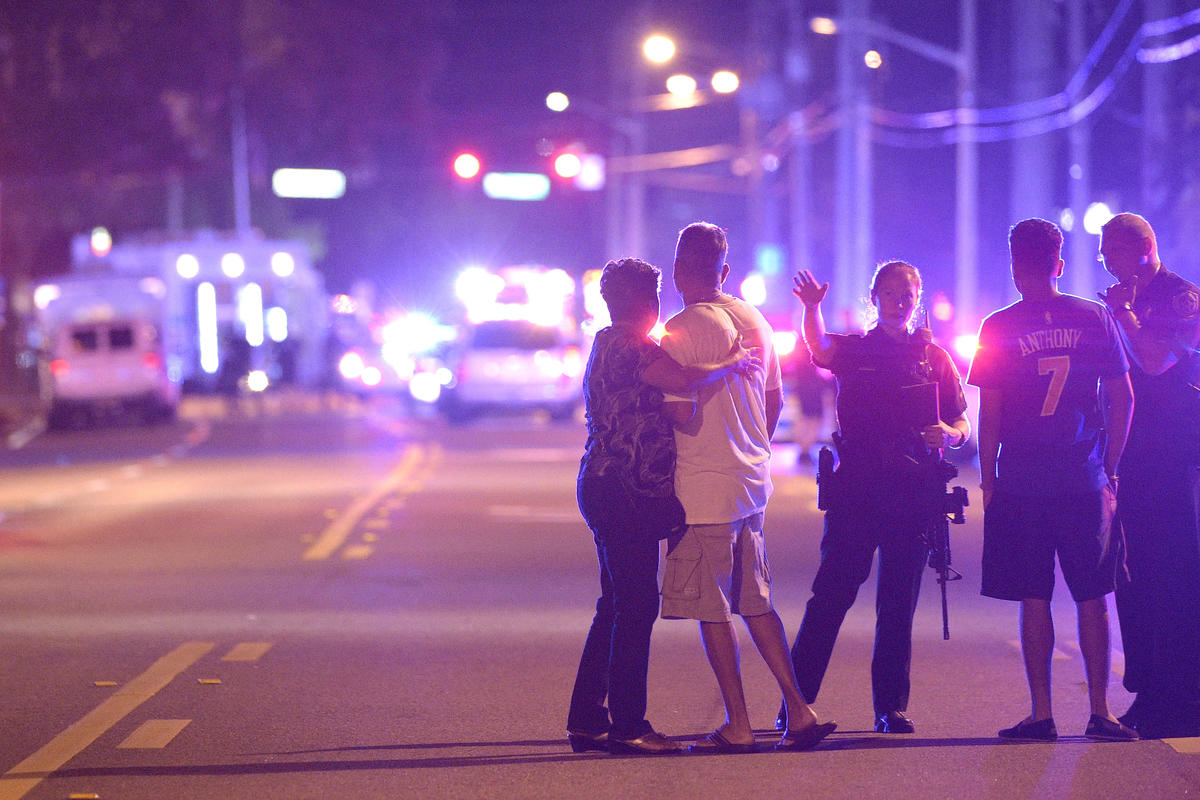 In the wake of America’s largest mass shooting in Orlando, along with the murders of Alton Sterling and Philando Castile at the hands of police, then five police killed by a sniper at a Dallas Black Lives Matter protest, access to weaponry is becoming one of the biggest factors threatening the government's ability to protect the peace and provide safety to ordinary citizens.

Gun violence is a feminist issue

Seventy per cent of mass shootings in the United States occurred in homes, with 57 per cent of incidents involving a family member or intimate partner.

Where a domestic abuser has access to a gun, the victim is eight times more likely to be killed. Furthermore, 64 per cent of all victims in mass shootings are women and children.

This week the Supreme Court of the United States quietly passed a decision that allows those convicted of domestic violence offences, committed “intentionally, knowingly, or recklessly” to be barred from buying or owning a gun.

Due to the uncharacteristically broad wording of the decision, this new federal gun restriction turns an originally unremarkable statutory case into a major win for gun reform advocates in the legislative field.

In addition to being an issue of domestic violence, primarily against women, mass shootings are a feminist issue under the umbrella of reproductive rights.

Champions of women’s reproductive rights focus on “the right to have children, not have children, and to parent the children we have in safe and healthy environments”. The latter, overlaps with the focus of advocates for gun reform to create safer environments. Feminists, and women of colour in particular, have long cited this intersectionality

Women of colour in the U.S. throughout generations of Jim Crow, the Civil Rights Movement, and now during throes of police brutality against black men, are at the forefront of the Black Lives Matter movement, as their sons and husbands are being targeted and murdered.

In view of police brutality and gun violence against young black men, the intersectionality of movements for gun reform, rallies for minorities, and efforts under the umbrella of black feminism are evident.

Gun violence as a race issue

Ninety per cent of the victims killed at Pulse Nightclub were Latino or of Latino descent.

In consolation statements following the attack, many leaders including Senate Majority Leader Mitch McConnel and House Speaker Paul Ryan offered their condolences to the victims’ families and their solidarity with the LGBTQ community.

But they failed to acknowledge that the attack was fuelled by racial hatred against a marginalized minority.

Glossing over the racial aspect of the attack has been widely criticized as a “whitewash[ing]” the victims’ experience, and the phenomenon doesn’t stop at the political stage.

A New York Times article provided statistics that showed how LGBTQ people are at the highest risk of attack when compared with other minorities, but the article failed to discuss the risks faced by minorities within that identity group.

This failure is in part due to the lack of statistics available for overlapping identities, but speaks to a greater struggle for recognition faced by minorities within the LGBTQ movement, and consequently, their struggle for adequate protection.

Acknowledging the intersection of race and sexuality means recognizing the difference in the experiences of different demographics based on defining factors like race, class, income, and various sub-cultures.

On the whole, Latino LGBTQ youth were less likely to “fit-in” with their communities, and more likely to face harassment and violence than their non-Latino identifying, LGBTQ counterparts.

Any subgroup within a demographic will inevitably share a distinct pattern of experiences. As a microcosm for the community at large, this survey reflects the reality that the Latino subgroup of the LGBTQ demographic face heightened threats and hurdles.

While action is welcome, a blanket application of indiscriminate policies is inadequate and will not realize the full potential for impactful change.

Analysts suggest that the Democratic party’s political will, combined with the organization and prowess of the gay rights movement, may have the ability to influence Congress, widening the scope of the issue from gun-control, to a broader issue of civil rights.

The Washington Post has called the gay rights movement one of the “most effective political movements in recent American history”, due to their ability to organize quickly and effectively, citing the NOH8 Campaign, the Human Rights Campaign and PFLAG as recent examples of major triumphs in equality.

Since the 1960s, gay rights groups have taken action by staging protests to bring awareness to homophobic behaviour, and have worked to build sympathy and support through an alliance with straight Americans.

The culmination of years of action to change the culture has seen American’s support for marriage equality double in the past 20 years from 30 to 60 percent, and come to fruition in a major historical success of last summer’s legalization of gay marriage.

Activist and actor George Takei has described the fight for gun-control as “the next chapter of LGBT history”.

Today, America’s gun politics are deeply entrenched in the values of conservative America and the sentiment that guns are a tool for safety is widespread.

The same level of organization and perseverance it took to gain reforms for the LGBTQ community is needed to change the culture and legislation pertaining to firearms. The LGBTQ community’s stake in gaining adequate protection and securing rights will galvanize the efforts of multiple intersecting minority groups along with reform proponents, to insure a strong campaign.

This focus on gun control as a civil rights issue has infiltrated Congress and appears to be the strongest platform used thus far to influence legislative reform. But are the efforts to create social dialogue ill-focused?

Dramatic shows of solidarity in the form of walk-outs and sit-ins gives the cause a spirit reminiscent of the Civil Rights Movement, yet this time around political action appears emotional and reactive rather than focused and strategic.

Led by John Lewis, African American civil rights icon, and current representative for Georgia, over 100 lawmakers participated in a sit-in on the House floor. During the 26-hour sit-in, participants waved signs with the names of gun violence victims, and sang the civil rights anthem, “We Shall Overcome” to pressure their Republican counterparts into voting cooperatively on gun-restriction proposals, namely the successful, bipartisan written “no-fly, no-buy bill”.

Scrutinizing the bill further, the restriction on disallowing those on “no-fly” lists to buy firearms will hardly affect gun violence in the country.

But it will give the government more power of surveillance on a particular class of people.

That class of people is disproportionately Muslim Americans.

Since 2014, the government had 680,000 people on their master watchlist, many of whom had “no recognized terrorist group affiliation".

Ramzi Kassem, a professor of law at CUNY School of Law calls the decision “terribly misguided”.

He is the founder of the CLEAR project that represents scores of clients placed on government watch lists, who satisfy the low threshold of “reasonable suspicion” of terrorist action. Kassem explains that it is “beyond easy” for government officials to nominate citizens for the various watch lists, but it is exceedingly difficult to be removed.

This has had devastating impacts on the families of many Americans, mostly Muslim Americans, who have been kept apart by one family member’s unjust loss of their right to mobility.

The transition of this bill into law would be the first step towards gun regulation in recent memory, but does that accolade outweigh its in inherent deficiencies?

Either way, lobby groups backing gun rights are on alert.

Despite deep pockets, (the NRA budget is seven times that of the Human Rights Campaign, America’s largest civil rights organization) and even deeper entrenchment in the politics of conservative America, the NRA may be correct in donning their homepage with the mayday; “Our rights are under attack like never before”.

The combination of political will and social movements could prove to be a potent combination to finally break this pernicious cycle of stagnation.

The conversation we need to have

The pressing need for recognition that certain groups face an inherently higher risk of gun violence, as a result of a systemic lack of protection and targeting, has been exacerbated by a multi-generational, governmental, and social practice of Nelsonian blindness.

Furthermore, a practice of semantic disassociation between issues of race and class, and issues of gun-control within the media, and in political publicity, further play into the manipulative complexities that works to obscure an issue of safety and civil rights, as an issue of gun-rights.

Without accepting change that is riddled in faults, simply because we are happy that the political water no longer appears stagnant, how do we facilitate conversation with those who consciously deny the complexities of gun violence?

The influence of pressure groups is slowly shifting the conversation from one solely about gun control, to a multi-faceted conversation encompassing wider problems of race, sexuality, and inequality.

The galvanization of a common aim for gun control between multiple overlapping demographics, may prove to be the necessary force to catalyze legislative change. But first campaigners must succeed in initiating a dialogue with those who don’t see gun reform as an issue at all.

I volunteered in Calais refugee 'jungle' and here's what I discovered