Trudeau warns against intolerance, leaves message of love at Auschwitz 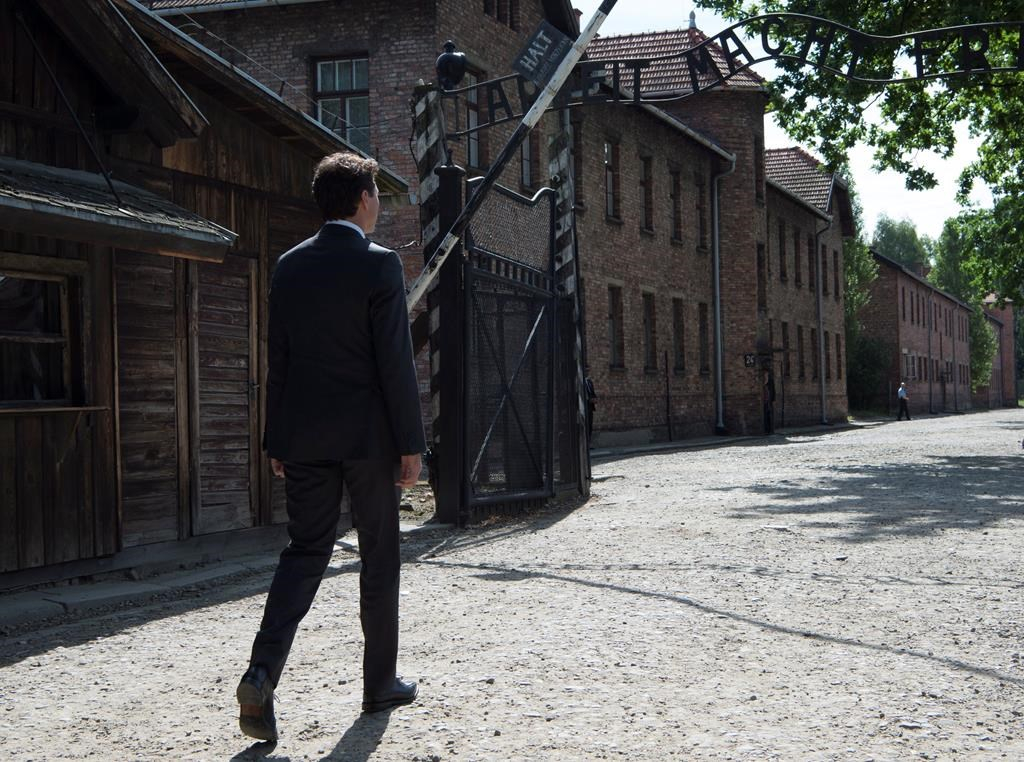 Prime Minister Justin Trudeau visited the site of the Auschwitz-Birkenau concentration camp in Germany on July 10, 2016. Photo by The Canadian Press.
Previous story
Next story

Prime Minister Justin Trudeau arrived in Ukraine after an emotional visit Sunday to the scene of one of the worst chapters in human history, the Auschwitz-Birkenau concentration camp, where he warned against intolerance and offered a message of love.

The blue skies and sunshine were a sharp contrast to the history of the camp as the prime minister walked past barbed wire fences and surveyed the gas chambers where more than one million people, mostly Jews, were killed in the Second World War.

Trudeau was stone-faced through most of the visit as he was escorted by one of the camp's survivors, 88-year-old Nate Leipciger. But the prime minister couldn't hold back the tears as he stood before the ruined gas chamber where Leipciger's mother and sister were murdered more than 70 years ago.

The prime minister didn't speak much during the nearly three hours he spent walking through the camp. But he did leave a message in a guest book kept by the Auschwitz-Birkenau State Museum.

"Tolerance is never sufficient," he wrote. "Humanity must learn to love our differences.

"Today we bear witness to humanity's capacity for deliberate cruelty and evil. May we ever remember this painful truth about ourselves, and may it strengthen our commitment to never allow such darkness to prevail.

"We shall never forget."

In an interview afterward, Leipciger, who has served on different Holocaust remembrance committees in Canada, said he didn't think he would survive Auschwitz, let alone show a Canadian prime minister around the concentration camp.

"There was no way that I had any future," he said. "My future was zero. And I'm coming back 73 years later with the prime minister of a wonderful Canada. An articulate, new leader who is taking the country into a new direction."

Leipciger said that he tried to convey to Trudeau "the tragedy of what men did to men, the hatred which drove on group of people to murder another."

Such hatred continues to exist in the world today, he said, with minorities still being discriminated against and murdered.

Leipciger said Trudeau received his message to remember the past while working for a better future.

"He cried with me," he said. "He shed tears with me. That's the greatest expression of understanding and feelings that he could have done to me."

Trudeau is the third prime minister to visit Auschwitz-Birkenau, after Jean Chretien and Stephen Harper. The stop came between the weekend's NATO summit in nearby Warsaw and his arrival in Ukraine, where he will spend the next few days.

The prime minister remained stoic through most of the visit as Leipciger recalled his experience at the camp, where he was held as a teenager during the Second World War. One stop was in a darkened room where a mound of hair was on display: locks from women and girls killed by the Nazis.

"This is the most difficult for me," Leipciger told the prime minister. "Maybe my mother's and sister's locks are in there."

Trudeau also laid a wreath on behalf of Canada at a wall where the Nazis shot hundreds of prisoners. After pausing for a moment of silence, he went to shake Leipciger's hand but instead ended up embracing him before Leipciger kissed him on the cheek.

The prime minister also looked shaken as he walked through an intact gas chamber.

A visit to the gas chamber where Leipciger's mother and sister were killed was highly emotional. Both Foreign Affairs Minister Stephane Dion and International Trade Minister Chrystia Freeland, who were with the prime minister, also wiped away tears at different points.

After visiting Auschwitz-Birkenau, Trudeau flew to Ukraine where he was to express Canada's solidarity with the country and sign a free trade agreement. Trudeau spent Friday and Saturday in Warsaw, Poland, attending the NATO leaders' summit. He returns to Canada following the six-day trip on Tuesday.