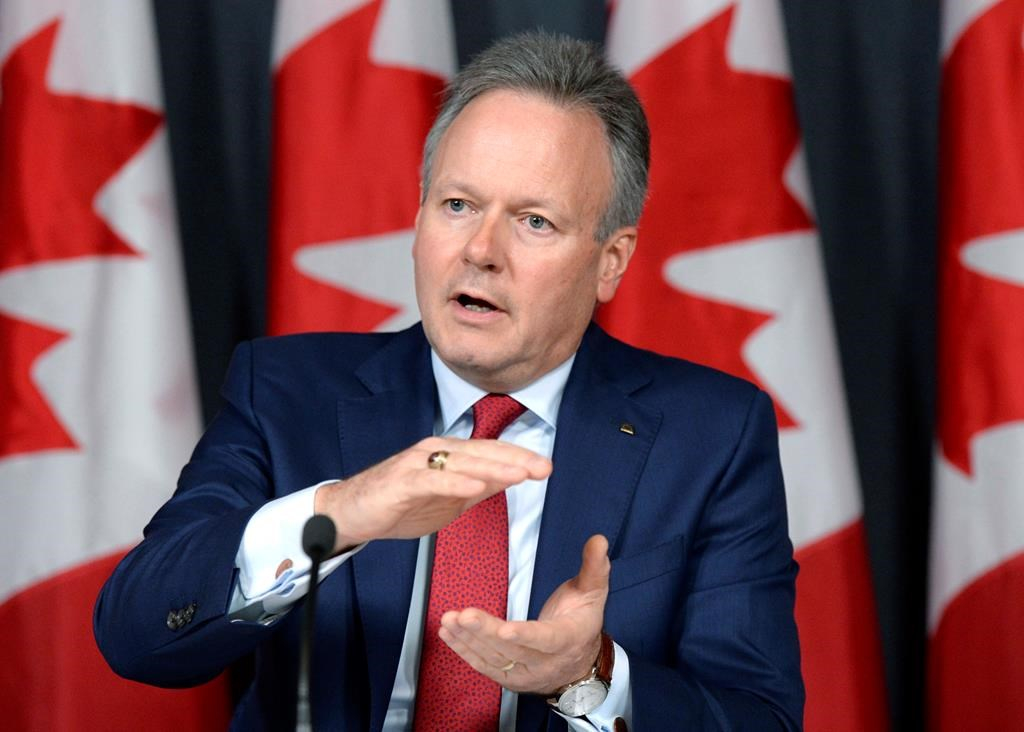 The Bank of Canada is cutting its outlook for the year, saying the extensive damage from the Alberta wildfires helped fuel an economic contraction in the second quarter.

The effects of the disaster, which temporarily shuttered key oilsands facilities, are being felt as the national economy struggles with weak exports, feeble business investment and uncertainty following the United Kingdom’s vote to leave the European Union.

The central bank’s forecast was released Wednesday along with its scheduled announcement on its benchmark interest rate, which governor Stephen Poloz left at its rock−bottom level of 0.5 per cent, as expected.

Among the projections, the bank for the first time released numbers on the potential impact of the U.K.’s referendum last month to exit the EU, also known as Brexit.

It said the fallout from the vote will lower global GDP by 0.2 per cent by the end of 2018, with most of that expected to be tied to an extended period of uncertainty around investment.

"The impact on the level of Canadian GDP over the projection period is likewise anticipated to be modest, about −0.1 per cent, reflecting, among other factors, Canada’s small direct trade exposure to the UK," the bank said in its latest monetary policy report.

The bank underlined the difficulty of determining the scope of Brexit’s impact on factors like financial conditions, trade and confidence.

"Assessing all of these effects is particularly challenging, since many important elements will be understood only as the process unfolds," the report said.

The report also provided a more−detailed assessment of the effects of the huge Alberta wildfires that erupted in May. The fires cut oil production, led to Fort McMurray’s evacuation and destroyed more than 2,000 structures.

The central bank estimated the fires shaved 1.1 percentage points from second−quarter growth — as measured by real GDP — and forced the economy to contract in that period by one per cent. In April, before the wildfires, the bank had forecast the economy would grow in the second quarter by one per cent.

After the fires swept through Fort McMurray, Poloz gave a preliminary assessment that it could knock between one and 1.25 percentage points off annualized second quarter growth.

But looking forward, the bank predicted a "marked rebound" in the third quarter with the resumption of oil production and rebuilding efforts in the region. It projected third−quarter growth to rise by 1.3 percentage points, helping the economy expand in that quarter by 3.5 per cent.

That bounce back is also expected to be fuelled by boosts from the federal government’s measures to enhance child benefits — which will support household consumption — and its commitment to increase infrastructure spending, the bank said.

The central bank also lowered its 2016 growth projection to 1.3 per cent from its April estimate of 1.7 per cent. In doing so, it pointed to weaker outlooks for investment and exports that have more than offset the positive effects of the recent rise in oil prices.

The bank is also anticipating the country’s non−resource sector to "assert itself as the dominant trend in the second half of 2016." It expects increased foreign demand and fiscal spending, along with the past depreciation of the Canadian dollar, to lift growth.

"The fundamentals remain in place for a pickup in growth over the projection horizon, albeit in a climate of heightened uncertainty," the bank said in the statement that accompanied its interest rate announcement.

In explaining its decision to stand pat on the trendsetting rate, the bank said inflation had remained within the ideal target range even though it had recently been a little higher than expected.

The bank did, however, warn that financial vulnerabilities are "elevated and rising," particularly in the Vancouver and Toronto areas.

The report reiterated Poloz’s past warning that soaring house prices in the hot markets of Vancouver and Toronto have been climbing at an unsustainable clip. He has said the prices have outpaced local economic fundamentals such as job creation, immigration and income growth.

The Bank of Canada’s next rate announcement is scheduled for Sept. 7 and its next monetary policy report will be released Oct. 19.

Will the Bank of Canada go Dutch and act on climate risk?