Sandbags holding in rain-soaked Saskatchewan town, but many homes damaged 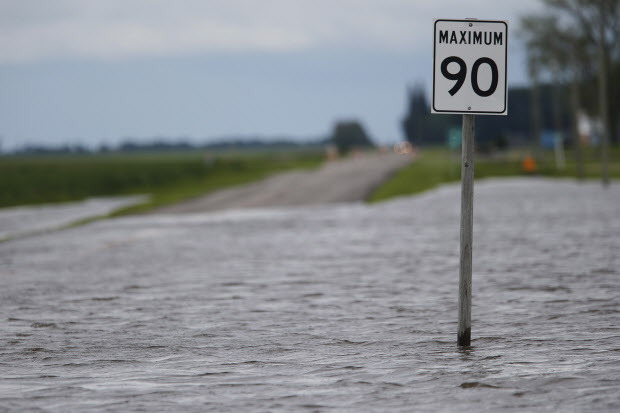 Hopes were high Tuesday evening that sandbagging efforts had at least partially paid off in an east-central Saskatchewan town that had braced for a flash flood after a road holding back water gave way.

Earlier in the day, officials in Arborfield started going door-to-door after the breach 13 kilometres south of the town.

The SaskAlert app warned of the potential for a flash flood.

"The town of Arborfield has issued a mandatory evacuation order for the entire town as flood waters approach that have the potential to create dangerous situations and extreme flooding," the alert said. "All residents ... are ordered to self evacuate if they can."

By the evening, though, deputy reeve Al Bronner said it looked like things were holding well.

"It hasn't breached the sandbags," he said. "It is flooding on one side of town where it flooded yesterday. But it's keeping it out of the main part, away from the nursing home and the downtown."

In the houses that had already been damaged Monday, however, "the water is basically running right through," he said.

Bronner said the rain had stopped at least for the moment and officials were hopeful the water levels had reached their peak.

Despite the evacuation notice, he estimated that about 75 people in the community of 400 were planning to stay and protect their homes.

The nursing home had been cleared out Monday. Others who left went to a nearby community where an arena had been converted into temporary housing, or they stayed with friends or relatives.

"I would think by morning they would all be able to come home if this all settles down," Bronner said.

Arborfield was one of four Saskatchewan communities under states of emergency due to flooding caused by heavy rain. In Carrot River, streets and basements were submerged by the rising waters.

Town officials estimated 50 homes had been flooded or had sewer backups.

"Our sewer has been keeping up but we've just been advised we're falling behind a little bit," said Mayor Bob Gagne. "The storm sewer is working, but it's tasked to the maximum."

And it wasn't over yet. A rainfall warning continued for a large swath of the province stretching from the southwest corner to the northeast.

Matters hadn't improved much in the southeastern city of Estevan, where storm sewers were unable to keep up with at least 130 millimetres of rain that fell in just over two hours on Sunday.

"Some of the flood equipment that's been sent out are sandbagging machines and sandbags. We also have staff out there teaching the communities how to effectively use those sandbag machines," Cleary said at the province's emergency management office in Regina.

"We also have sent out hoses and pumps and that type of thing, so that they can be set up in areas that are pooling the water."

Residents of a trailer park in Estevan were moved earlier because of flooding, Cleary said.

Environment Canada said 50 to 75 millimetres of rain had already fallen by Tuesday morning and a further 10 to 25 millimetres was likely over the course of the day.

Two-day rainfall totals could be as high as 100 millimetres by Wednesday morning, the agency said.

"Some of the hardest areas hit yesterday ... have stabilized now, or are starting to stabilize, and are not necessarily going to receive as much precipitation today as originally thought," said Cleary. "That's good for them to be able to ... start moving into that recovery mode."

However, emergency officials were still closely watching as the weather system moved east through Saskatchewan towards Manitoba, she said.

"You have to look at what other events have happened previous to this and the soil saturation levels ... that already exist. In some areas that have received other precipitation in other events lately, they may not have the capacity to actually absorb the water that they would get from this system."

The Manitoba government said rivers in western Manitoba have been able to absorb recent rainfalls. Officials weren't expecting widespread floods, but warned that localized, intense rainfall could create overland flooding in some areas.

-- with files from CTV Regina