Hamish Stewart: Mark Carney to Canadian bankers: get it together on climate 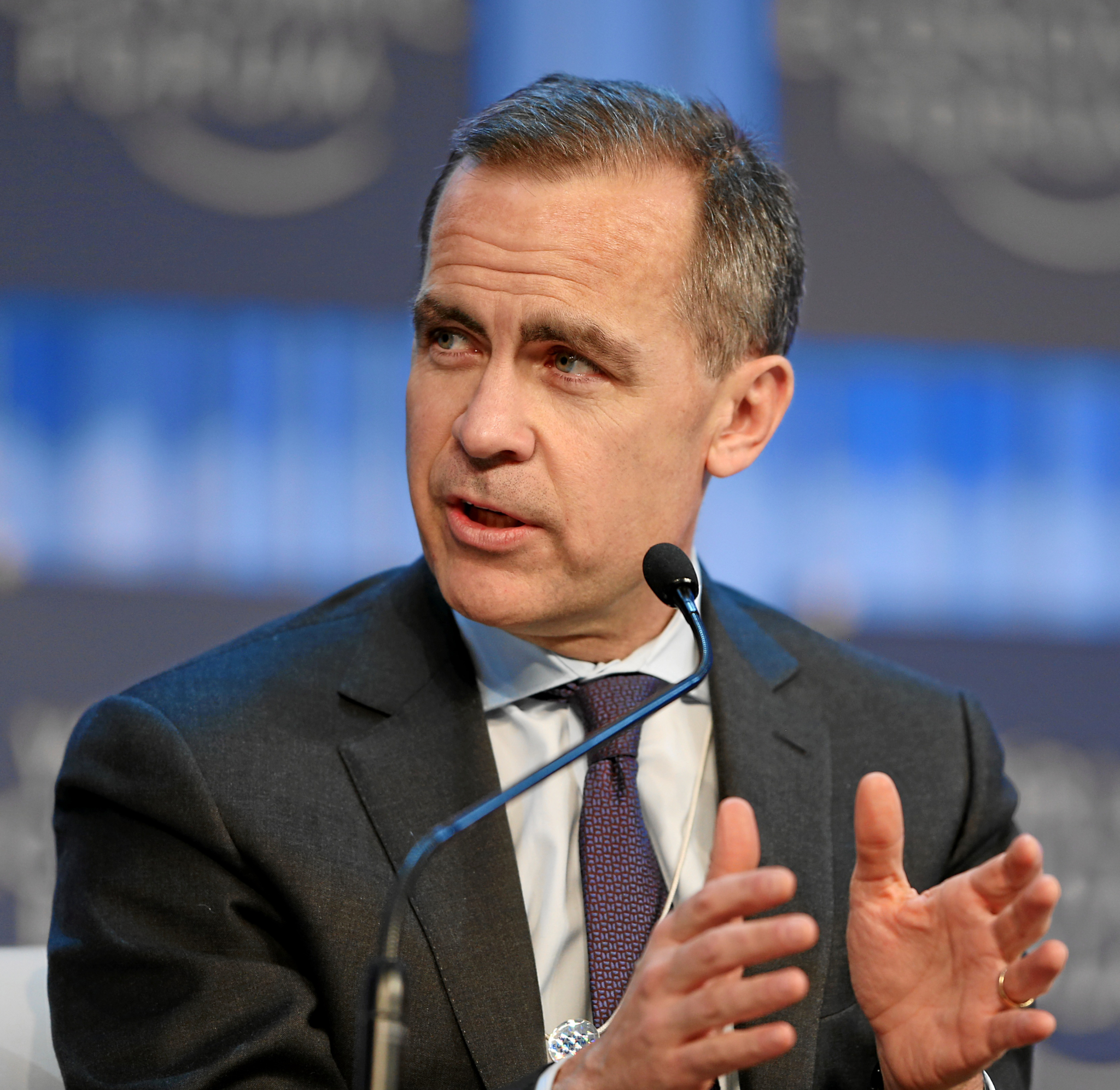 The Bank of England's Mark Carney appears at the annual meeting of the World Economic Forum in Switzerland in January 2013. File photo from Wikipedia.
Previous story
Next story

Mark Carney, arguably the most powerful Canadian on the planet, is back in Canada to talk dollars and climate change. The former Governor of the Bank of Canada now presides over the Bank of England and Chairs the G20 Financial Stability Board (FSB). He will address the Toronto Board of Trade later today on the significant risks and opportunities for our financial system as climate impacts increase and fossil fuel use is phased out in G20 member states.

Carney has been an international leader in understanding the implications of global commitments to phase out fossil fuels. Yet in Canada, his message has fallen on deaf ears. From our largest companies in the energy and banking sectors to our pension funds, climate change related investment risks and opportunities are being ignored. When the most respected voices on the international stage are ringing the alarm, why are Canada’s financial industry leaders hitting snooze about the risks and opportunities of a rapid energy transition away from fossil fuels?

Breaking the tragedy of the horizon

Carney will speak to Canada's finance professionals about the ways in which climate change could affect financial stability. His address in Toronto will echo a speech given last year at the Bank of England in which he described three major climate risk categories: physical risks, liability risks and transition risks. Physical risks include those from increased incidence and severity of floods, wildfires and storms. Liability risks arise if those suffering climate change-related losses, including shareholders, pensioners, and others, seek compensation from those considered to be responsible - including company directors and pension trustees. Transition risks are caused by the downward revaluation of assets during an adjustment to the lower-carbon economy and the phase out of fossil fuels (think US coal industry).

Carney described the failings of short-term thinking in the financial system and the need to manage long-term risks linked to climate change as a “tragedy of the horizon.” Global rating agency Moody’s and the FSB Task Force on Climate-related Financial Disclosures have both expanded the analysis since Carney’s speech.

What has been missing from systemic climate risk analysis and action in Canada is individual leadership. On the international stage, Mark Carney and former mayor of New York Michael Bloomberg have both made a point of raising climate change and energy transition scenario planning as key risk management tools. Yet in Canada, the largest, most exposed hydrocarbon companies continue to deny that the world is changing around them. The business models of companies like Encana, Kinder Morgan, (run by former Enron president Richard Kinder), and TransCanada Corporation, all assume “business as usual” and zero policy action to transition power generation and transportation away from fossil fuels. The gatekeepers of corporate risk communication, Canada’s rating agencies, actuaries, and accountants, are similarly ignoring climate risk in their evaluation of company cash flow models and annual reporting. Yet outside of Canada, the world’s largest accounting firms, rating agencies and professional advisors are already telling their clients to report on their readiness for a low-carbon world.

Prior to joining Cenovus, Mr Ferguson was Chief Financial Officer and Executive Vice President of Encana, another company looking to the past and betting their business on a “burn it all” world of 4-6 degrees of global warming. Rather than encourage a buildup of unaddressed risk and financial liabilities within the energy sector, it is time for those at the top of the industry to step forward and demonstrate leadership. Such leadership is required to manage the shift towards a renewable energy system capable of driving economic growth, job creation, and badly needed productivity gains across the Canadian economy.

Moving the energy sector from climate denial to leadership

Other countries are moving ahead. Bjorn Otto Sverdrup, Statoil’s senior vice-president for sustainability, told a Financial Times conference this month that the Norwegian state oil company is “shifting from being a mainly oil and gas company towards being much further into renewables”. The pivot by Statoil management towards renewable energy shows that addressing systemic financial risk linked to climate change and a transformation in energy generation requires individual leadership.

It is time for more Canadian energy sector leaders to step forward and acknowledge the business implications of the Paris Agreement. This will require them to follow the lead of international peers and evaluate their current business models and cash flow projections against agreed upon international emissions reductions targets and a G20 fossil fuel phase out.

Our largest banks have also failed to show leadership in addressing systemic financial risks linked to the low carbon energy transition. Instead, they continue to funnel money into high-cost oil sands extraction, while simultaneously starving a nascent clean energy sector of capital.

Corporate banking leaders like Bill Downe, CEO at the Bank of Nova Scotia, and David McKay, CEO at the Royal Bank of Canada, could be engaging in public debate on the financial sector’s role in the transition from a 20th century hydrocarbon-based energy system to one that is fit for modernity. Yet Mr Downe and his Canadian CEO peers remain stubborn defenders of the oil sands status quo, refusing to confront climate risk factors raised by their international banking colleagues.

All of the major European banks and a number of their US counterparts have spoken publicly about the need to shift financing away from fossil fuels to renewable energy, and to align lending portfolios with Paris Agreement targets. Canadian savers are still waiting for leaders to step forward. The energy transition is now underway, and financiers who ignore reality could be in trouble. Silence on a material business risk is no longer an option for responsible company directors, including those at Canada’s largest banks.

One step up the financial power ladder from our banks, Canada’s largest pension funds are also in desperate need of leadership on climate risk. Heather Munroe-Blum is one obvious candidate. Munroe-Blum sits on the Board of Directors of the Royal Bank of Canada, and is also the Chair of the Board of Directors at the Canada Pension Plan Investment Board (CPPIB), Canada’s largest investor. With $280 million of pension savers’ money under management, the CPPIB should be leading the discussion on climate risk started by Carney. Munroe-Blum sits in a position of power and could be working to ensure that our financial system is ready to adapt to Paris Agreement targets and an orderly transition to a carbon neutral economy. She is precisely the type of person who one would expect to respond to Mark Carney’s call to action.

Instead of showing leadership, Munroe-Blum and her colleagues on the CPPIB board prefer fossil fuel industry reassurances that continued burning of oil and coal is good for business and for pension savers. Yet the point of the work initiated by Mark Carney at the FSB is to consider the future of global economic growth as the market transition towards zero carbon energy systems accelerates. If Canada’s pension leaders, who have legal duties to consider their members best long-term interest, refuse to acknowledge that the future will be different from the past, we are all in trouble.

While financial sector leaders must step forward to engage their peers on systemic climate risk, citizen investors must also speak up. Every single Canadian citizen with a bank account or pension fund has the power to ask how our shared financial system could be better prepared for the energy transition. For long term pension savers, the question about how energy stocks will be perform over the next 10, 20, or 30 years has profound implications for their pension nest egg. As long as our banks and pensions are still betting on a world of 4-6 degrees warming and potentially catastrophic climate change, pension saver should also be asking how accelerating climate change impacts could affect investment returns across the economy.

Addressing climate risk requires individual leaders within the financial sector to step forward. Let’s hope they do so after Friday.

The best financial minds cannot predict economy.
Only the poor know nothing will change talk talk the 1%. blah blah

nice. yes. only way we get

nice. yes. only way we get decent action is with leadership and courage.

Timely article. This is

Timely article. This is precisely the sort of debate that should be raging in Canada' crumbling mainstream press. Except it isn't. Perhaps because they too are in the thrall of the hydrocarbons industry? Did British Columbian's take note that the former head of ENRON now runs Kinder Morgan? If you have forgotten who ENRON is, look it up, and contemplate the implications for the trust worthiness of Kinder Morgan.