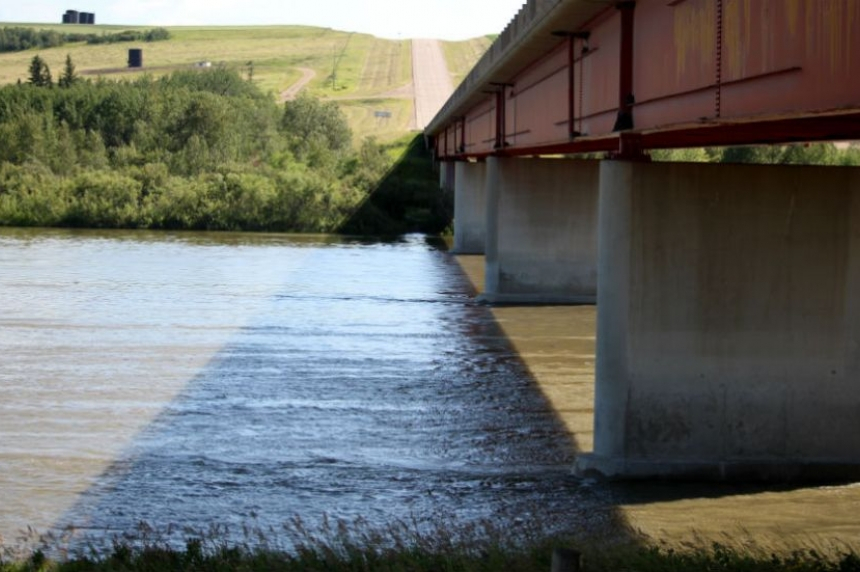 Residents of the small western city of North Battleford, Saskatchewan are being asked to cut water consumption as Husky Energy officials race to clean up as much as 250,000 litres of oil spilled from a pipeline.

The municipality shut down its water treatment plant on Friday morning when an oil slick was detected downstream of the city in the North Saskatchewan River. The Husky leak is equivalent to roughly 1,570 barrels of crude oil and other material that flowed into the waterway. Officials don't know yet what caused the disaster.

North Battleford has enough water stored in its reservoirs and tower for three days as it continues to source most of its water from a nearby groundwater well treatment plant. Nevertheless, environmentalists are calling the accident a stark reminder of what Canada is getting itself into if it approves TransCanada Corp's cross-country Energy East pipeline:

“This is another dangerous reminder of the threats that pipelines bring with them," said Mike Hudema, climate and energy campaigner for Greenpeace, of the leak.

“I think it should give everybody — especially the prime minister — pause for thought as he’s considering building even bigger pipelines and bringing some of these disasters to communities across the country.”

In the meantime, Saskatchewan's Water Security Agency will continue to take samples as Husky Energy's booms attempt to contain the oil swishing around the North Saskatchewan River, where the city draws its drinking water. The Calgary-based energy company's pipeline, whose age is unknown, runs from its heavy oil operations to its facilities in Lloydminster. 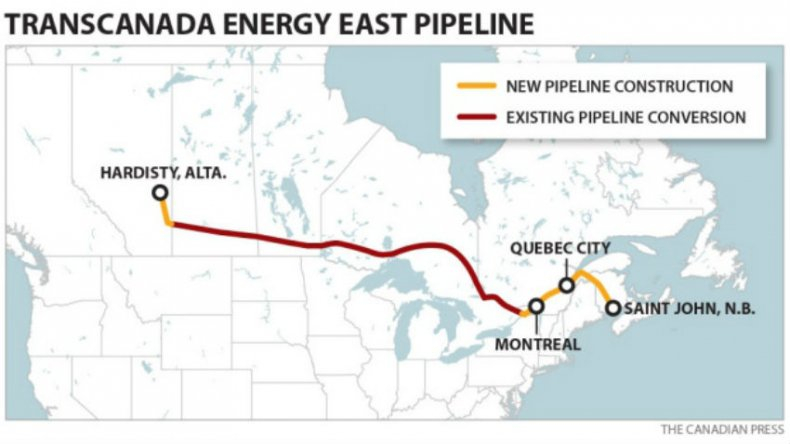 No safe pipelines in Canada

At the federal level, National Energy Board hearings for the controversial, $15.7-billion Energy East pipeline are slated to begin in August, and expected to be "one of the most innovative" of their kind in history as the general public is permitted to attend. The proposal seeks construction of a 4,600-kilometre pipeline that would transport roughly 1.1 million barrels of crude oil per day from Alberta and Saskatchewan to refineries in Eastern Canada and a marine terminal in New Brunswick.

Calgary-based TransCanada gave the NEB a 38,855-page application to proceed with the project. But it has not yet figured out how to safely run the pipeline beneath the Ottawa and St-Lawrence Rivers near Montreal and Quebec City.

According to a recent report by Environmental Defence, The Council of Canadians, and Transition Initiative Kenora, Energy East would cross nearly 3,000 streams, rivers, and lakes across the country, and endanger the drinking water of more than five million Canadians.

"The sheer scale of Energy East is enormous compared to the spill we’ve seen in Saskatchewan today," said Patrick DeRochie of Environmental Defence, “and this is just one pipeline spill in a series of pipeline spills that we’ve seen over the last 10 years.

"TransCanada for example, the same company that’s building Energy East, with Keystone — that pipeline spilled 12 times in its first year of operation.”

Hudema from Greenpeace agreed, and said the only safe pipeline in Canada is a pipeline that isn't built.

“I live here in Alberta, a jurisdiction that’s pushing for this pipeline, and our average is two pipeline spills a day," he explained. "That’s not an average that I think any community or municipality should be comfortable with.”

Just this morning, he added, a pipeline at the Suncor Base Plant north of Fort McMurray leaked as well, although Suncor reported that the spill was contained and no product reached the river. Suncor told National Observer that 20 cubic metres of diluent was spilled, but its containment system worked as intended and there is no further environmental risk. 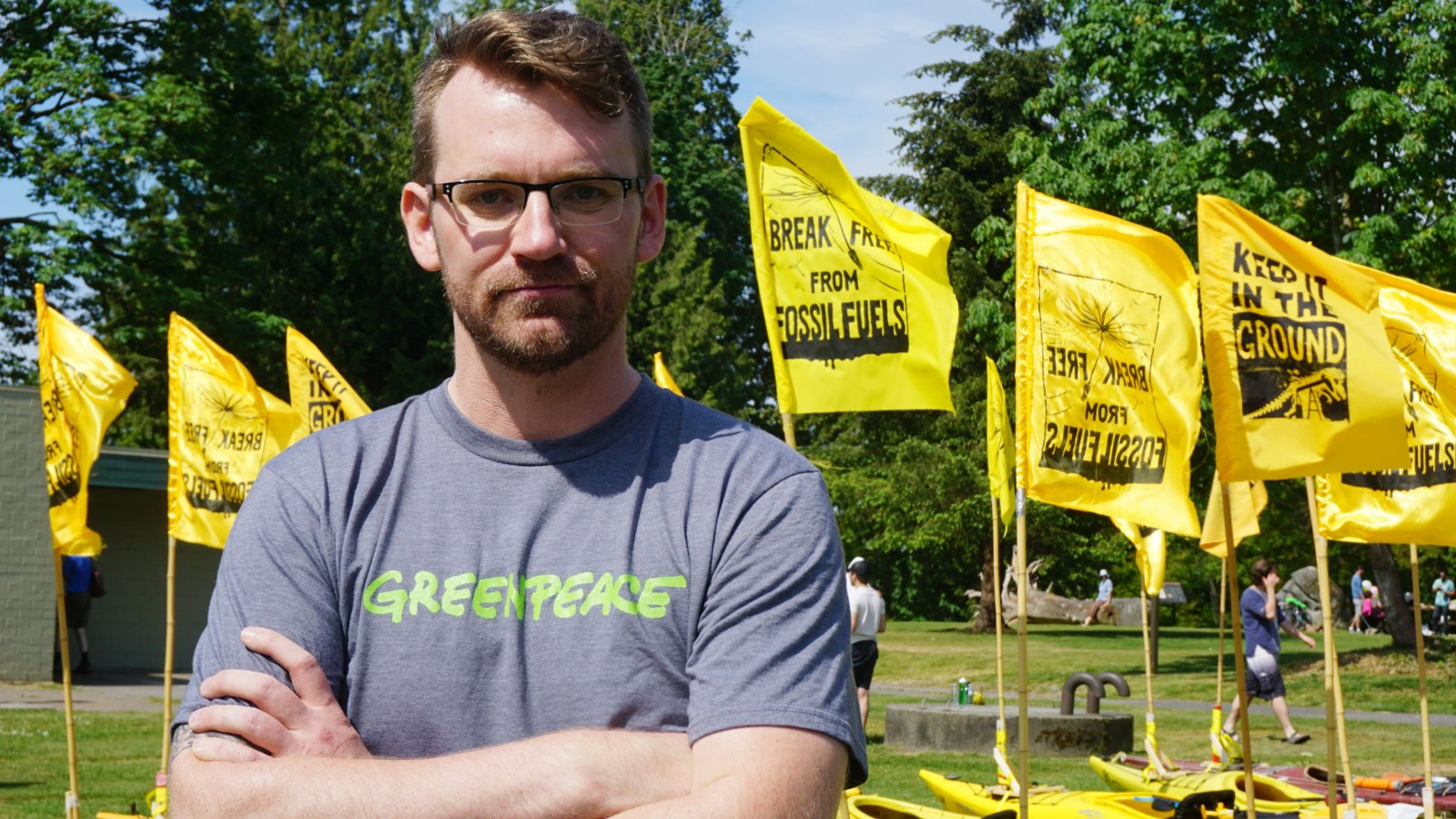 Further east, Husky has been lauded as "really diligent" by Saskatchewan's Environment Ministry manager of Hazmat and Impacted Sites, Ralph Bock, for its response to the incident. No water advisories have been issued so far, and according to a city media release, the company is working with North Battleford to construct a berm around its water treatment plant to protect it from spilled material.

It could be weeks before the cause of the leak itself is known, said Husky officials. When asked if he was concerned about public backlash as a result of the pipeline spill, Husky president Asim Ghosh told reporters:

"To be honest with you, I distinguish between a media reaction and a public reaction. But as far as we are concerned, we just focus on getting on with the job, you know. If we’ve got a pipeline spill, we address the pipeline spill. We ensure we’ve got procedures in place and we ensure we make the procedures even more robust from each learning experience."

TransCanada declined to respond directly to the links made by environmentalists, but it defended pipeline safety in a brief statement sent to National Observer:

"Pipelines remain the safest and most environmentally sound way to get needed oil and gas to market and TransCanada has a proud 65-year history in doing just that. We believe that no incident is acceptable and all spills can be avoided. While these incidents are rare, as an industry we learn from each of them and from each other to better prevent them from occurring again."

TransCanada further said it was an "industry leader" in testing, developing, and deploying technology for leak detection, pipeline construction and integrity management. The company believes that a "zero incidents" goal is within reach for the Energy East pipeline, should the federal government approve it.