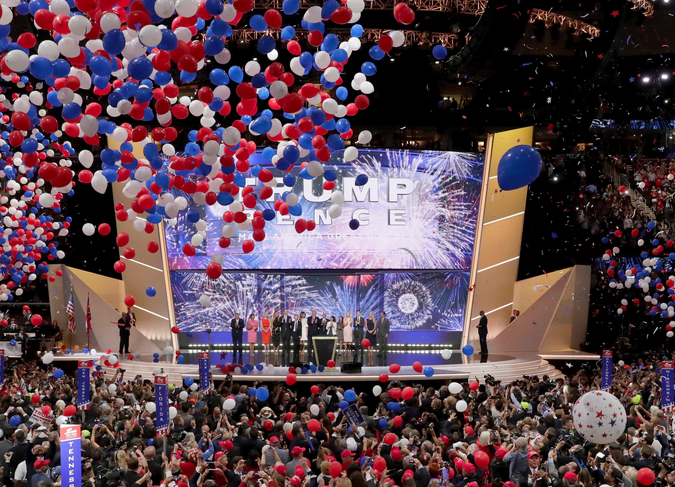 Many of you, if you can stomach it, have been watching the hot mess called the Republican National Convention this week as it unfolds with increasing the already insane candidacy of Donald Trump.

Starting with the speech of his wife, Melania, who evidently penned it herself and copied almost word for word, part of Michelle Obama’s in 2008, and ran it by a speechwriter who I, imagine, edited and corrected the English, but in no way, had any suspicions that it may have been plagiarized. The fallout has been huge nationwide—but the teflon Trump campaign can only say it has gained a tremendous amount of publicity and that’s all they seem to care about. The other fallout is a little more complex. The speechwriter, who offered to resign, Meredith McIver, is a paid employee of the Trump Organization, and under campaign finance rules, it is illegal for the campaign to use her. Now they are backpedaling saying she was working as a “volunteer”. There are plenty of alleged fine lines being crossed, using Trump organization funds for the Trump campaign as well as Trump property which will not sit well with campaign laws.

Tuesday night, on “Get America Back to Work night” Chris Christie, the Governor of New Jersey, ironically, (in trouble for a scandal known as Bridgegate) tried Hillary Clinton as if he was a prosecutor, to a lynch mob crowd chanting “lock her up.” The extreme speech was unorthodox and inexcusable.

Very little was said about getting America back to work in an economy that is actually booming. As of January, 2016 “The economy has added more than 9 million jobs, and the jobless rate has dropped to below the historical median.The number of long-term unemployed Americans has dropped by 614,000 under Obama, but it is still 761,000 higher than at the start of the Great Recession.Corporate profits are up 166 percent; real weekly wages are up 3.4 percent.” (Brooks Jackson-and Bureau of Labor Statistics). So it’s hard to see how badly Obama has performed.

Christie’s speech whipping the “lock her up” crowd was something all of us here in America should be ashamed of. I can’t think of anything Hillary Clinton has said about Donald Trump which would compare to anything so vile. She has repeatedly said he is unfit to be President of the United States. Merely because he is allowing the kinds of things like Christie making this speech, like his wife to be subject to deep humiliation and the butt of innumerable jokes, would indicate a lack of control of the depth of responsibility of his staff for long term consequences of every act surrounding the campaign.

Then we can’t leave out Dr. Ben Carson. The GOP’s black mascot, (along with Trump apprentice Amarosa, the most hated apprentice to ever be on the show on “the Donald’s reality show on NBC, The Apprentice) spoke at length about God deserting the country if “we didn’t put Him back.” (Back where?) Now I know for a fact, Dr. Carson has a direct telephone line to the vengeful egomaniacal God who abandons all the United States children who don’t do exactly what the Republicans say. We are doomed.

This all on the evening when Trump was officially nominated—he gave a half assed acceptance speech squinting into the lights by video, without using the words “I accept”. So humble. Few noticed the missing Colorado delegation, and the New Hampshire delegation. Rows of empty seats-delegates not thrilled by their candidate.

But also earlier in the day on Tuesday, Al Baldasaro, an “adviser to Trump on Veteran Affairs” with Trump present, said Hillary Clinton should be lined up and shot for treason- referring to the Benghazi scandal of which the United States taxpayers spent millions of dollars at the Republicans behest investigating, notwithstanding the admitted altering of documents to make Secretary Clinton look guilty by former SC Representative Trey Gowdy. Secretary Clinton has been cleared of all charges. And it has repeatedly come to light, it was in fact the Republican Congress, which voted to cut security to all the embassies throughout the world that had a direct impact on the events in Benghazi.

Pat Smith, who lost her son in Benghazi, spoke on Monday night, and said she personally held Secretary Clinton responsible for the death of her son. That the Republicans would exploit the death of an individual, and a mother’s grief to vilify the rival candidate, on the same evening Rudy Giuliani states how disgusted he is with how nasty Clinton campaign is with the way she is treating Trump is mind boggling. Secretary Clinton spent 12 hours in front of a Congressional committee, televised for the country to see and was found innocent of any wrongdoing.

In addition to the Benghazi witch hunt, Secretary Clinton has been scrutinized for a series of emails while she was Secretary of State- for having a personal server and for deleting 50,000 of those emails. Now, she had a daughter who was getting married while she was traveling extensively being Secretary of State. She would have been BUTCHERED if she had used government emails to plan Chelsea’s wedding no doubt. So she was damned if she did and damned if she didn’t. NO ONE has really pointed this out. And to her credit, neither has she. It would seem rather obvious.

The FBI has cleared her of any wrong doing—and the director has gone out of his way to make it clear the investigation was NON-PARTISAN. Since then, it is my understanding only two of the said emails of “poor judgement” labelled by the FBI were actually not classified at all.

So—let’s examine some historical Republican email server history in comparison. It has been said Condi Rice and Colin Powell both used personal servers. Yes, they weren’t running for President, but no one held them under a microscope or accountable either. It might be said, in their defense, to have a private server in government life is to not use taxpayer money to conduct your real life. That is really not against the law.

But, then there’s the 22 million emails deleted by Karl Rove, right hand to President George Bush in 2007. The email server formed under gwb43.com in 2000. Why delete them, if you have nothing to hide? Two scandals of note. Valerie Plame, a CIA agent, outed by the Bush administration in revenge for her role in revealing they lied about there being weapons of mass destruction in order to start the Iraq war. A plain and simple act of treason, and that act endangered undercover operatives across the globe. Scooter Libby, a Bush staffer, took one for the team and went to jail. Someone was guilty.

Then there was a purge of US prosecutors—scandal. Evidence erased. Gee. No media coverage, no John Boehner, Paul Ryan, John McCain. Compared to Secretary Clinton’s now vetted mere 50,000 emails—mostly for her daughter’s wedding. Kinda like stealing a diamond necklace and roasting the other guy for buying a silver bracelet. The Republicans suffer from the classic “it’s okay if we do it” but if you do it, you need to die. Literally.

And no firing squad. That a candidate for President of the United States, would allow one of his advisors, in a speech, to say his rival should be lined up and shot for treason, is in my opinion, inexcusable, and shows he is indeed unfit to be President of the United States. The lack of dignity alone in the way in which this convention has been handled is enough to know the country will be in shambles. Make America Great Again? I don’t think so. They can’t even keep the lights on there.

It would seem that said advisor is now under investigation by the Secret Service for verbally voicing a credible threat against a Presidential candidate and former First Lady. What’s next? Will this be Trump’s first executive order? To have a new Federal Death Penalty by Firing Squad?

They are saying it’s the “new Republican way of thinking.” And yet Mitt Romney, the Bushes, McCain and Kasich, the old GOP regulars are absent from the convention and Ted Cruz spoke and refused to endorse Trump. Plagiarism, absenteeism, rebellion, campaign corruption— an RNC in shreds. And a new adjective has been born here in America—Trumpian. The definition —f—-ed up. Used in a sentence, “Hey, that’s Trumpian.

41 percent of the American people seem to forget, Donald Trump has never held public office. Unless they consider a Prime Time Circus slot on NBC “serving the public”. He’s never made the kind of judgment calls that would put him before a Congressional committee. The words “terrific, and fantastic will not cut it at a NATO summit if you are saying you are going to abandon our allies. There’s no history there. Only a man, who ran out on his first wife for his second and and dumped his second to avoid having to give her money—who has made a living filing for bankruptcy, —- reneging on his debts—robbing Peter to pay Paul so to speak in the billions and he calls that smart business could allow a three ring circus like the RNC to happen and shrugs it off. I’m sure the banks and people to whom he owed the money including the students who faithfully enrolled In “Trump University” don’t think he’s so smart.

There”s a bald eagle, the United States national bird, who was in a commercial with him that didn’t like him at all- it bit him—I think that says it all.

If he’s elected, I’m looking forward to meeting all of my Canadian brothers and sisters as a seeker of political asylum from the insane asylum.

"Valerie Plame, a CIA agent, outed by the Bush administration in revenge for her role in revealing they lied about there being weapons of mass destruction in order to start the Iraq war."

It's actually even worse than that. It was Plame's *husband*, Joseph C. Wilson, who publicly revealed that one of the documents used to justify the Iraq war was a forgery. Valerie Plame played no direct role in that revelation at all, but yes, in pure revenge, the Bush administration leaked her status as a CIA agent to one of their tame right-wing journalists.