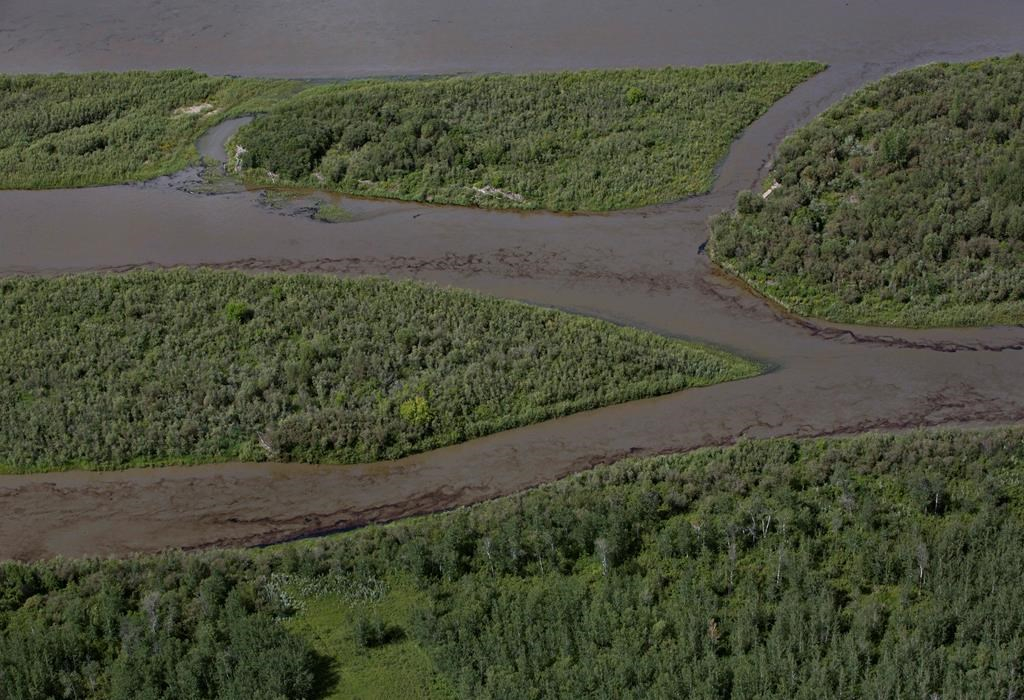 Officials in Saskatchewan are preparing a city of more than 35,000 people to treat storm pond water as a backup as oil from a pipeline leak makes its way along a major river in the province.

Sam Ferris with Saskatchewan’s water security agency said Prince Albert gets most of its water from the North Saskatchewan River, and staff there are getting ready to shut down the intakes when oil from the leak flows past the city.

Ferris said the city is planning to treat water from storm water retention ponds and other reservoirs, which he said would last approximately seven days.

"At this time, we don’t think the plume is going to reach Prince Albert for some time, likely not before sometime later Sunday or early Monday," Ferris told a media briefing on Saturday morning.

Between 200,000 and 250,000 litres of crude oil and other material leaked into the river on Thursday upstream from a breach in Husky Energy’s (TSX:HSE) pipeline near Maidstone, Sask.

The company shut down the line and put out the booms about 40 kilometres upstream from North Battleford, a city which has already shut its water intakes.

Ferris said officials are working on ways to treat water for hydrocarbons if backup water supplies run out before the oil passes.

He said preparations are also being made downstream after the North Saskatchewan and the South Saskatchewan rivers converge, where a Saskatchewan Water Corporation intake draws water for Melfort and other municipalities.

Prince Albert issued a statement late Friday afternoon urging its residents to fill bathtubs and water jugs with water over the next 24 hours.

North Battleford saw signs of the spill as early as Friday morning and shut down its water intake plant. The city also has a groundwater supply, but Ferris said the amount of water that can be treated from it is limited, particularly during the summer when demand is high.

Wes Kotyk with the Saskatchewan government’s environmental protection branch told the media briefing that Environment Canada is working on models to predict when communities can expect the oil to pass and how long it will take to flow through, but he said it’s complicated by recent rain that’s affected the amount of water in the river.

Kotyk explained that the first of the downstream containment booms, which was located on the river near Paynton, Sask., was damaged because of debris that was flowing in the river rain upstream in Alberta.

Ferris, meanwhile, said the turbidity of the water due to the rain would complicate the process of treating water to remove oil, if it comes to that.

"The water is quite dirty with suspended particulates and whatnot, and in some cases you can get oil attached to those particulates," Kotyk explained.

"If you run into these semi−floating blobs of mud and oil, that can be more problematic."

The pipeline runs from Husky’s heavy oil operations to its facilities in Lloydminster and carries oil mixed with a lighter hydrocarbon, called a diluent, that’s added to ease the flow.

Bert West with the petroleum and natural gas branch of the province’s economy ministry said it was built in 1997. Trucks are now carting the oil that would have been carried by the pipeline, he said.

West said there’s no word yet on what caused the leak or on the size of the breach.

"Husky has told us they’re not worried about finding that out until they get the cleanup done," West said. "Until it’s been dug up, we don’t know exactly where the location is and what happened to it."