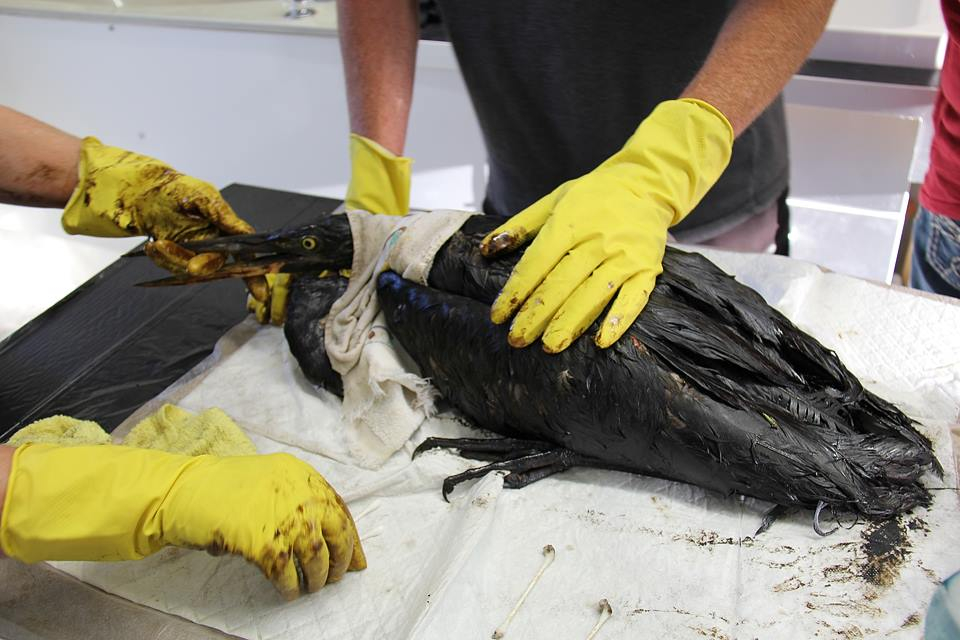 Staff at the Lend a Paw Animal Rescue race to clean up an oil-covered bird affected by the Husky Energy spill on Mon. July 25, 2016. Photo courtesy of Lend a Paw's Facebook.
Previous story
Next story

The federal government is investigating a Husky Energy spill in central Saskatchewan that leaked more than 200,000 litres of oil from its pipeline into the North Saskatchewan River last week, forcing two municipalities to shut down their water treatment plants as of Monday.

The drinking water of one of the municipalities, Prince Albert, could be affected for up to two months according to an estimate from a city official.

Environment and Climate Change Canada told National Observer that its enforcement officers are now determining whether there may have been a contravention of federal environmental and wildlife legislation before, during, or after the leak. Husky officials failed to contain the spill where it began on Thursday, and roughly 1,570 barrels of crude and other materials have since flowed into the waterways where Prince Albert and North Battleford source their drinking water.

"Our environmental emergencies officers are on-site to assess the situation and to provide scientific advice to inform clean-up options," said an email statement from the federal department. "They are also collecting samples to better understand the characteristics of the spilled oil and its behavior in the North Saskatchewan River... As this is a matter under investigation, it would be inappropriate to comment further at this time."

Prince Albert joined North Battleford in enacting emergency water restrictions on Monday morning when the oil slick was visually detected upstream of the district. Both cities are now operating on reserve water supplies, supplemented by other sources, and encouraging their residents to consume water sparingly:

"The City of Prince Albert urges residents and commercial businesses to restrict water usage and conserve water," said the latest statement from the municipality, released Monday. "Water is only to be used for essential purposes."

In North Battleford, all outdoor watering has been prohibited, and spray parks, car washes, and laundromats have been shut down. The spill of more than 200,000 litres was first detected in the central-western city on July 21, and reached the city's water supply on Friday.

As efforts to contain the leak have faltered, its eastern neighbour of Prince Albert has also closed all irrigation services, the municipal water crane, paddling pools, and the Kinsmen Water Park in an effort to conserve water. The city has promised residents that "safe, potable drinking water" will be provided around the clock, and on Sunday, announced construction of a 30-kilometre pipeline southeast of the city to provide an alternative source of water from the South Saskatchewan River, which has not been contaminated.

Husky, a Calgary-based energy company, has set up at least five booms in the region to contain the spill, the cause of which is still unknown. An estimated 1,570 barrels of crude oil and diluent were leaked from its pipeline on Thursday, which runs from its heavy oil operations to its facilities in Lloydminster.

Husky has reported that shoreline cleanup is underway near the pipeline site, surveillance by ground, air, and water continues, and water monitoring and sample testing programs remain in place. While deterrent devices are also being used to keep wildlife away from the spill, the company said that one of three birds coated in oil by the accident has died at the Wildlife Rehabilitation Society of Saskatchewan.

"Our primary focus continues to be the safety of the public and the protection of the environment," read a statement on Husky's website. "Anyone encountering an impacted animal or bird should call Husky’s 24-hour emergency line at: 1-877-262-2111."

The pipeline was installed in 1997, the company told National Observer, and has been regularly inspected under Husky's management plan. Roughly 100,000 litres of spilled oil have been collected from the land and water so far.

The company is co-operating with and supporting the rehabilitation centre, and municipal and provincial authorities. The pipeline is regulated by provincial authorities rather than the National Energy Board, but Wes Kotyk of Saskatchewan's environmental protection branch told reporters on Monday that Environment Canada is working on models to predict when communities can expect the oil to pass and how long it will take to flow through.

He added that recent rain has also affected the amount of water in the river, hampering the clean up efforts. The first of the downstream containment booms, which was located on the river near Paynton, Sask., was damaged because of debris that was flowing in the river rain upstream in Alberta, he said.

"The water is quite dirty with suspended particulates and whatnot, and in some cases you can get oil attached to those particulates," he explained. "If you run into these semi−floating blobs of mud and oil, that can be more problematic."