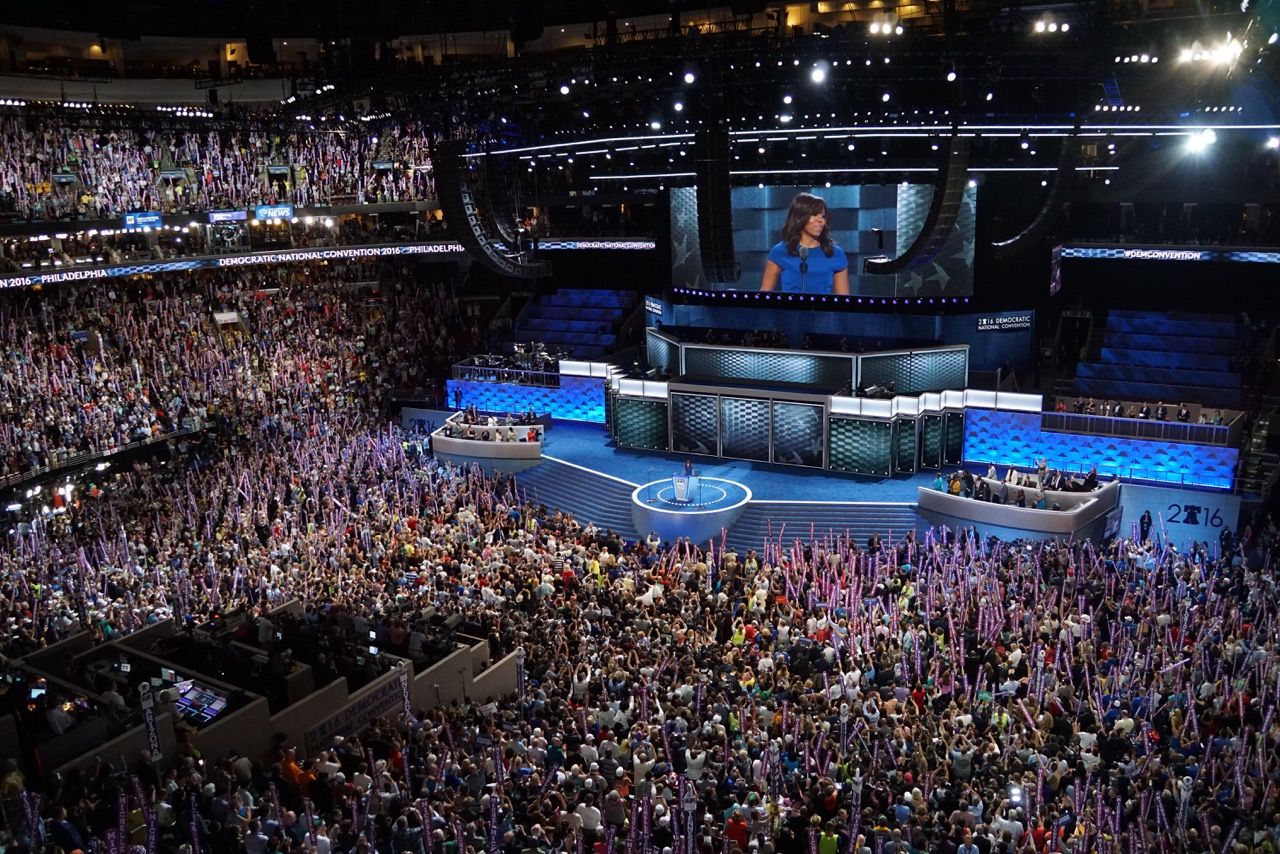 After a week-long prelude to the apocalypse at the Republican National Convention with Donald Trump, it was time for some sanity and optimism to be restored with the Democratic convention in Philadelphia.

The theme of the night would be “unity” — and rightly so. Bernie Sanders delegates booed the man himself earlier that day in response to his endorsement of rival Hillary Clinton. It looked like the convention was going to be at least a little chaotic.

From the start of the day, Bernie supporters chanted “Bernie! Bernie! Bernie!” or “Count the vote!.” They booed at any mention of Hillary or Kaine during DNC Chair Marcia Fudge’s speech.

After the noise finally quelled she stated in a disappointed tone to the crowd before leaving the stage:“We’re all Democrats and we need to act like it.”

The unrest didn’t end up lasting long. Diane Russell’s powerful speech, noting her unrelenting support for Bernie and the need to now unite at this moment for the greater good, was a turning point.

Elijah Cummings noted in his speech that “this election is bigger than Hillary Clinton” and “bigger than Bernie Sanders.”

Chants of “No TPP” periodically arose throughout the convention.

Eleven-year- old Karla Ortiz, the daughter of undocumented Mexican immigrants, spoke about her worries over the risk of her parents being deported. She spoke of the comfort she found in the idea of Hillary Clinton over Donald Trump as president. She received a standing ovation from the crowd.

Trump, meanwhile, was given plenty of attention throughout the convention.

Al Franken delivered a comedic yet serious roast of Trump, claiming at one point that he’d gotten a doctorate in megalomaniac studies from Trump University.

Sarah Silverman’s endorsement of Hillary produced chants of “Bernie! Bernie! Bernie!” from a part of the crowd, at this point very small.

She didn’t hesitate to respond, telling the chanters, “You’re being ridiculous!” Unfortunately, this didn't seem to help.

Cory Booker, Michelle Obama, and Elizabeth Warren gave rousing and powerful speeches that had the room buzzing, and maybe even unified.

After all that, it was time for the final act.

Queue Bernie Sanders. The room exploded into cheers, and roughly three minutes passed before he could even begin his speech.

The entire convention seemed to have acquired Bernie signs and wouldn’t stop chanting his name.

It was supposed to be the DNC, not a Bernie rally. But looking at the scene, you might have expected balloons to fall after his speech, as if he was the official Democratic nominee.

Sanders gave his as-usual powerful speech, and after some time, gave his full endorsement of Hillary Clinton. For the remainder of his time on stage, Sanders continued to speak nothing but highly of her, and urged his supporters to vote for her.

But Sanders may not have done enough on Day 1 to convince his supporters, who are still actively protesting against Hillary in his name.

The RNC you didn't see