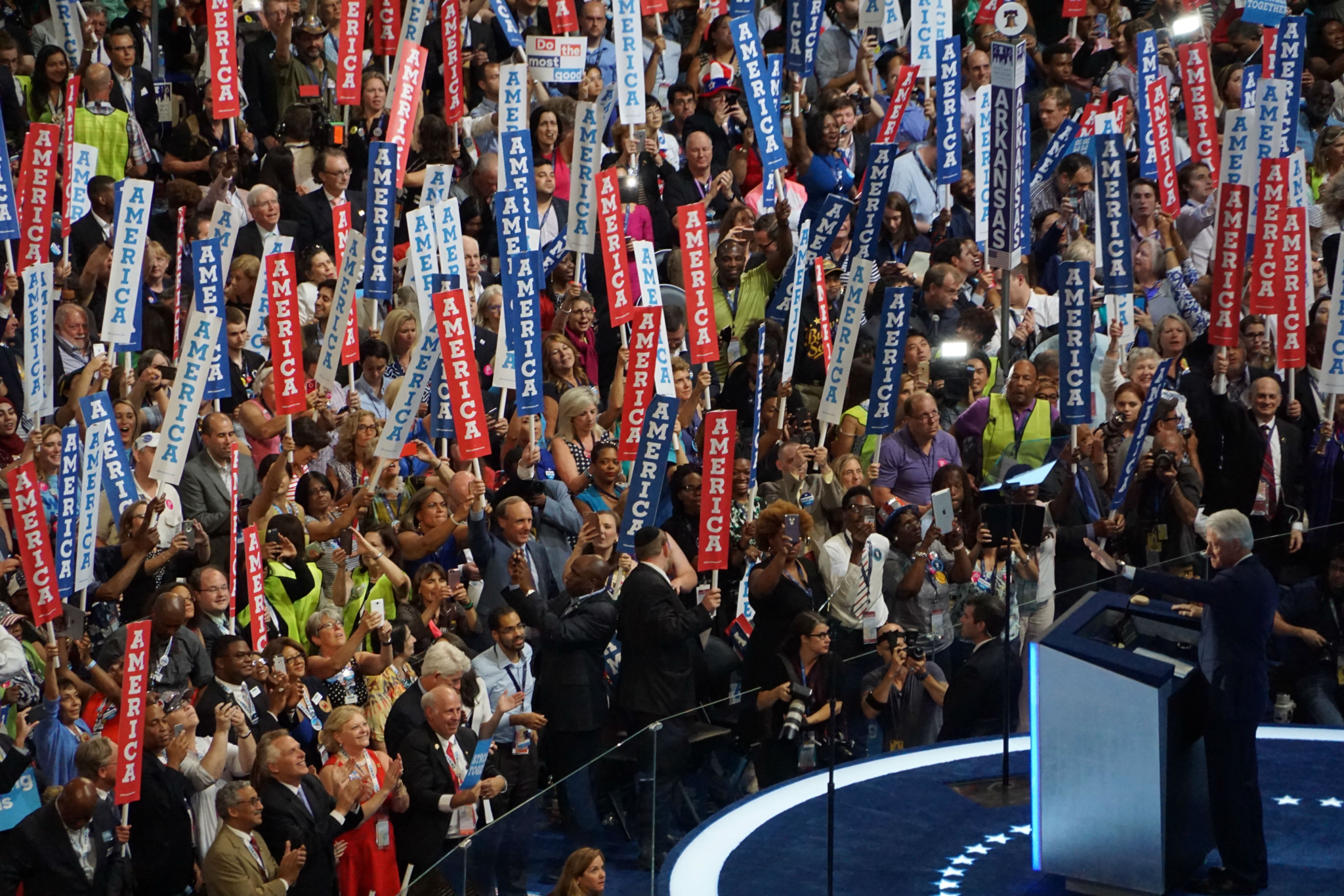 Photo of Bill Clinton speaking at DNC in Philadelphia on July 26. Photo by Eli Krag.
Previous story
Next story

Day two of the Democratic National Convention is a test to see if the party can unify behind Hillary Clinton and avoid handing the race to Donald Trump. On Monday, Bernie Sanders had addressed the delegates, telling them he was counting on their votes for Clinton. The die-hard Bernie fans didn't seem ready to heed his call.

But as day two rolled along, the boos and chants dissipated. State after state announced their votes and speaker after speaker rallied the crowd. But underneath it all was an unspoken thread of suspense for the big speech of the night. Could Bill Clinton pull it off? Would the explainer-in-chief manage to rally the troops? It was an unprecedented challenge - a former president called upon to rally the troops behind his own wife's bid for the White House. In the end, Bill Clinton’s speech was so powerful that the Democrats already seemed to be achieving unity inside of the convention. And President Barack Obama is still to come.

Former Iowa Senator Tom Harkin delivered a powerful speech, which ended in him getting the audience to follow his lead by saying something in sign language. After a moment of signing, he declared to the audience, “That, my friends, is the sign for America!” Everyone was thrilled. The room was ecstatic.

American patriotism is a funny thing, viewed by someone who lives in Canada. I couldn’t help but laugh a little.

But it looks like 1/20th of the room still thinks Bernie will somehow be president. They begin chanting “BERNIE SANDERS! BERNIE SANDERS!” in between speeches.

One woman behind me who had seemingly suffered a severe 'Bern' would scream “BERNIEEEEEEEEEEEEEEE!!!!!” at the top of her lungs every time the room quieted down.

As on day one, part of the room chanted Sanders' name, while others responded with their support for Clinton. Outside, the anti-Hillary protests heated up.

The two women sitting next to me were new delegates who voiced their admiration of Sanders, despite declaring they were “with her.”

As the night went on, they got more and more drunk, and one of them spilled wine on me as she stood up to cheer. It was funny to see delegates in person doing normal human things.

Time for the nominations. Three separate delegates rose to give speeches about why they are nominating Bernie Sanders for the presidency. They’re met with such loud cheers from the entire room that for a moment it seemed like Sanders might actually get voted in. But really, most in the room were fully supporting him for his campaign and for making the right move in an attempt to unify the party in the hope of defeating he who shall not be named.

Sure enough, as the Hillary nominations came in, the crowd cheered just as loud.

As each state cast their official votes for each candidate speakers gave huge respect and praise to Sanders and everything he’s already achieved with his movement.

When it came time for Vermont, the state surprised everyone by announcing that they would be “passing,” only to be revisited after the rest of the states had voted. They handed the mic to Sanders down on the floor. Everyone listened attentively as Sanders bypassed DNC rules and officially declared Hillary the first female democratic presidential nominee.

The song “Happy” by Pharrell Williams kicked in and the entire room erupted in cheer and dance.

Some people do not like Hillary Clinton. Personally, I spent the entire primaries arguing against her in favour of Sanders. But at this point, voters are either in favour of Hillary or in favour of Trump. At the DNC, it seemed the overwhelming majority of delegates gets that.

The Mothers of the Movement — comprised of African American mothers who lost their children to gun violence or to violent incidents involving the police — gave heartbreaking speeches about the events that lead them here, eliciting tears from the audience. Among them were Geneva Reed-Veal, the mother of Sandra Bland, who died in a Texas jail cell after being pulled over for not signaling as she switched lanes. They left the stage to the sound of “Black Lives Matter!” being chanted by the entire stadium.

As former president Bill Clinton walked in, the audience cheered louder than they had at any point that night, waving displaying their “America” signs in unison.

His speech was delivered with a kind of charm that I had never seen from him. He spoke highly of his wife Hillary, and near the end of his speech asked the audience: “How does this square up with what you heard at the RNC? One is real, and one is made up.”

Whatever people's views on Hillary or Bill Clinton, he was right: the DNC has been a refreshing restoration of reality in this election cycle, following the chaotic gong show of the Republican Party's nomination of Trump.

By the end of the night, there was a palpable sense of common purpose in the convention hall.

As for those outside the convention, we’ll have to wait and see what happens.

The RNC you didn't see