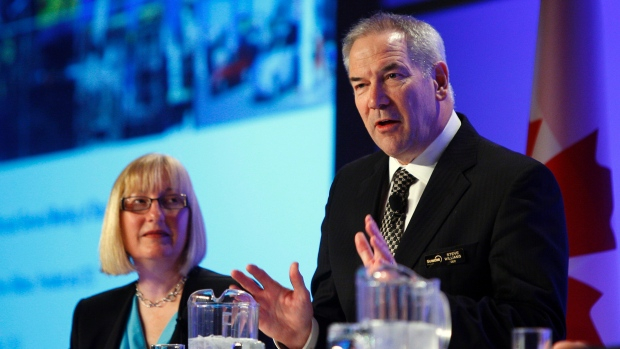 Dozens of major oil companies, including some Canadian industry leaders, are being summoned by an international human rights investigation looking into the impacts of climate-warming pollution, said Greenpeace on Wednesday.

Activists from Greenpeace's Southeast Asia chapter initiated the investigation by petitioning a national human rights tribunal in the Philippines. Their complaint has prompted the commission to ask 47 energy companies to respond to the allegations within the next 45 days, with public hearings potentially starting by October.

The allegations say that the 47 companies are responsible for disrupting the rights of people affected by extreme weather and other changes related to global warming through their carbon pollution that is trapping heat in the atmosphere and contributing to the problem.

"Climate change interferes with the enjoyment of the Filipinos’ fundamental rights," alleges a 65-page petition prepared by Greenpeace and other groups to request the investigation. "Hence, the Petitioners demand accountability of those contributing to climate change."

Kristin Casper, an American lawyer based at Greenpeace's Toronto office, said the case is the first in which a national human rights institution has investigated the responsibility of private companies for causing climate change. Several multinational energy companies, including Canada-based Suncor, U.S.-based Exxon Mobil, Chevron and Royal Dutch Shell, are among those under investigation by the Commission on Human Rights of the Philippines.

While the commission cannot impose any binding sanctions, it could make recommendations and issue findings that the government or the courts could use to demand action from the companies, Casper explained. It would also force the companies to directly face those suffering the impacts of pollution from the fossil fuels that are warming the planet and causing climate change, she added.

"This is the first time a national body has ordered companies to respond," she said in an interview. "We encourage the commission to hold a public hearing… where CEOs will have to come face to face with those whose livelihoods are at risk."

The investigation was first announced at the COP21 international climate change summit in Paris last year. Greenpeace Canada noted that Canadian Environment Minister Catherine McKenna has publicly supported including human rights into the agreement reached at that conference.

Suncor, Chevron, Shell as well as Imperial Oil — an affiliate of Exxon, did not immediately respond to requests from National Observer for comment. Each company has developed its own policies to reduce its carbon footprint and Suncor recently announced it was aiming to significantly improve its own action to reduce emissions for each barrel of oil it produces in Canada by 2030.

But the plan is not projected to reduce Suncor's annual greenhouse gas emissions.

Casper said Greenpeace's objective was not necessarily to lay blame, but rather to encourage companies to develop a plan that protects the rights of vulnerable people who are impacted by climate change and helps them cope with climate change impacts.

"Companies like Suncor want to be recognized as leaders in sustainability, but won't commit to reducing its contribution to climate change," said the lawyer, who serves as litigation counsel for Greenpeace's climate justice and liability project.

"Corporate buzzwords like organization excellence and improved GHG intensity won't cut it when face to face with people who risk losing their homes and livelihoods to climate-fuelled superstorms and who want to know what companies are going to do about it."

More than a dozen other civil society organizations had joined Greenpeace Southeast Asia in petitioning the Philippines commission to launch the investigation. The groups said they were also joined by 18 Filipino individuals who are "living on the front lines of climate change."

New action by companies could particularly be welcome in the Philippines where extreme weather has caused massive damage in recent years that has threatened homes and public safety.

"This whole process is about preventing harm," she said. "It’s not trying to look into past. It’s about protecting people's future."