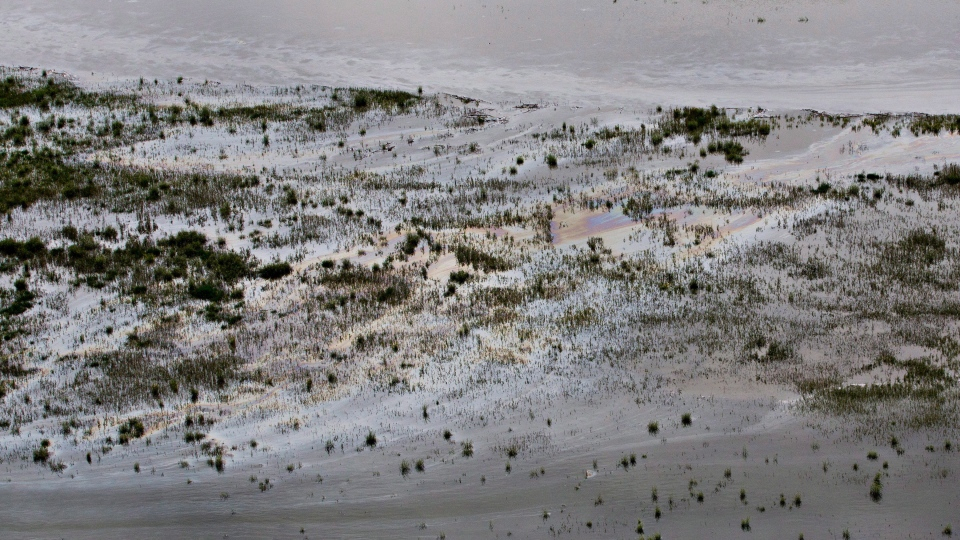 The early results are in and they confirm a catastrophic oil spill from a Husky Energy pipeline has contaminated the North Saskatchewan River, says a new report on the incident released by the Calgary-based company on Wednesday.

Five samples, taken within a 20-kilometre stretch of the North Saskatchewan River, flunked, confirming the water wasn't fit for human consumption based on federal government guidelines. The test was based on standards for safe levels of contaminants and demonstrated that the five samples exceeded the guidelines.

But Husky says that the vast majority of the testing, beyond that 20-kilometre stretch, found that the water was safe, based on the federal guidelines.

Overall, more than 1,000 water samples have been collected to date, and of the 900 whose lab results have been released, more than 99 per cent met Health Canada's standards. The samples were collected at various river depths at over 60 locations along the river, from the release site to Prince Albert, Sask. approximately 385 km downstream.

The data was collected by an approved, professional third-party consultant, said the Husky report, and the province's Water Security Agency has launched its own independent sampling program as well.

The results come two weeks after a Husky pipeline, built in 1997 near Maidstone, Sask., leaked, releasing more than 200,000 litres or 1,740 barrels of diluted crude oil into the environment. The leak occurred shortly after the company restarted the flow of oil through an interconnected pipeline network. The chemicals rapidly moved downstream, compromising the drinking water of two cities, Prince Albert and North Battleford, and prompting emergency preparations and water restrictions throughout the region.

Saskatchewan's Ministry of Environment told reporters yesterday it is "unlikely" that the entire spill will ever be contained as oil continues to sink to the bottom of the river, and on Wednesday, Premier Brad Wall said more tests were needed before affected municipalities can reopen their drinking water intake plants.

According to the latest government update, preliminary cleanup of soil and vegetation removal along the shoreline is ongoing, and boats have been deployed to take extra water samples, conduct SCAT assessments, and look for impacted wildlife. The animal death toll has risen to 63 since Tuesday, with nine wildlife currently in recovery at Focus Wildlife in Maidstone, an organization Husky is supporting.

Environment and Climate Change Canada has also opened a federal investigation into whether there were violations of Canadian environmental laws such as the Fisheries Act and the Migratory Birds Convention Act.

More than 130,000 litres of oil have been recovered so far, and 11 booms are attempting to contain the rest.

- with files from Canadian Press

What about the after effects?

What about the after effects? First Nation people are dying from pollution and the cause is greed.

Why did it take 14 hours for

Why did it take 14 hours for husky oil to respond to the oil leak. That is just unacceptable.

63 = drop in the bucket since many would have sunk, left the area or been eaten in the 14 hour grace period. It will go up the food chain. Good thing it wasn't at the coast or they would be spraying the Corexit that was mysteriously approved in Canada recently. So much for transparency, science, environment, Indigenous rights AND rebuilding any trust in government.