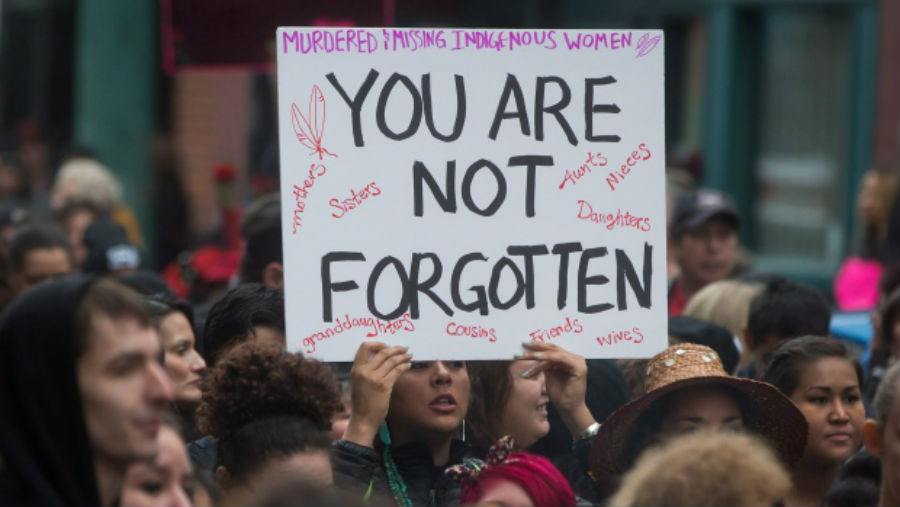 Sign held at a 2015 Vancouver march in honour of missing and murdered indigenous women and girls. Photo by Canadian Press.
Previous story

The number of missing or murdered indigenous women in Canada has not escaped the attention of members of the international human rights community, who will keep a close eye on a national inquiry they say is long overdue.

"I think the international community in general is looking to see Canada live up to the human rights principles and values that it espouses," said Meghan Rhoad, with Human Rights Watch in Washington, D.C.

The United Nations and other international human rights bodies and non−governmental organizations have all issued reports on the nearly 1,200 indigenous women and girls who have gone missing or been murdered in Canada.

Canadian families and advocates alike have used that degree of global scrutiny to amplify their calls for an inquiry — calls that until this year have gone unheeded.

The scrutiny included a stinging rebuke by the UN Committee on the Elimination of Discrimination Against Women, which released a report last year concluding the disproportionate amount of violence indigenous women face in Canada — including the high number of deaths and disappearances — constitutes "grave violations" of their human rights.

Perry Bellegarde, national chief of the Assembly of First Nations, said the impact goes beyond borders.

"It’s a national tragedy, but it’s an international shame," Bellegarde said Wednesday in Gatineau, Que., after the Liberal government unveiled the terms of reference for the inquiry and handed the reins over to its independent commissioners.

Dinah Shelton came to Canada to learn more about the issue in 2013 when she was rapporteur on the rights of indigenous peoples at the Inter−American Commission on Human Rights, an arm of the Organization of American States.

Its 2014 report added its voice to the call for a national inquiry.

"It took a lot of external pressure for something that should have been dealt with internally a long time ago," said Shelton, a professor emeritus of international law at George Washington University.

"Hopefully this will encourage others not to wait so long, when they have similar problems, to take this up."

There’s another lesson the situation in Canada can teach other countries about the pervasiveness of violence against women, she added.

The reports from international human rights groups have included recommendations on how police handle investigations involving missing or murdered indigenous females and also on how to deal with allegations of police misconduct.

The terms of reference for the inquiry give the commissioners broad powers to compel witnesses and summon evidence, including in provincial and territorial jurisdictions such as policing. They do not, however, mention police explicitly — an omission that has been a point of contention for family members and critics.

"I think it is entirely legitimate for everyone to be asking that question, because we have seen processes gone forward on this topic before that did not deal with those (issues)," said Rhoad, whose organization issued a 2013 report on the role of policing in missing and murdered indigenous women in northern B.C.

She said the report from the UN committee, for example, pointed out that the recommendations in the 2014 report of the House of Commons special committee on violence against women did not include anything on police misconduct.

Craig Benjamin of Amnesty International Canada said it remains to be seen whether the inquiry is equipped to address the concerns raised by international groups.

"It’s significant that the government has been clear from the outset that the intention is to get at the root causes, and to move forward with a comprehensive response," Benjamin said.

That has been central to what the international human rights bodies have asked for, he added.

"How well the inquiry can actually serve that purpose is going to depend to a large degree on the co−operation that it receives from the provincial and territorial governments, from policing services — and questions remain about that."

Bennett to meet families of MMIW ahead of inquiry announcement