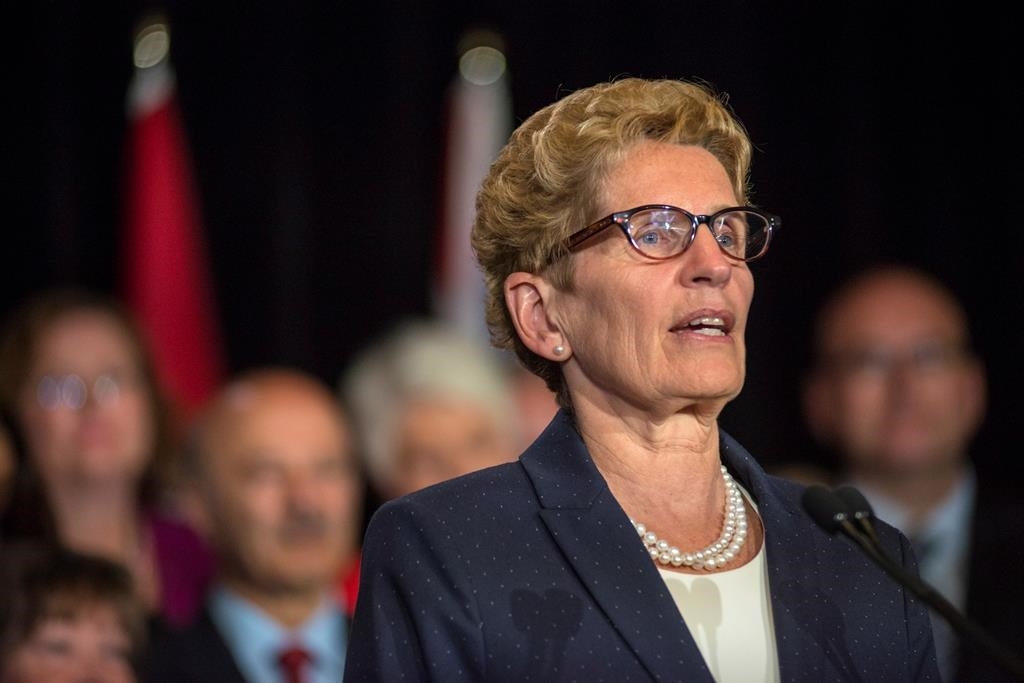 Premier Kathleen Wynne is defending the decision to bury the cost of Ontario’s cap−and−trade plan in the "delivery" line on natural gas bills.

The Ontario Energy Board announced last week that costs related to the Liberals’ climate change plan would not appear in a separate line item on consumers’ bills for natural gas, which is used to heat most homes in the province.

Wynne said Thursday that the government doesn’t interfere with decisions made by an arms−length agency like the energy board, which she pointed out consulted the industry and public before issuing its directive on carbon pricing.

"My understanding is they talked with local distribution companies, they talked to consumer groups across the province, and as you know, they are an independent body," she said. "They made a decision to configure the bills that way and we don’t direct the OEB."

Quebec and British Columbia include the cost of carbon pricing as a separate line item on bills.

But like Wynne, Energy Minister Glen Thibeault insisted it was the energy board’s decision to put the cost of cap and trade in the delivery charge instead of its own line on bills.

"It’s not up to us as the government to tell an arms−length organization what they can and cannot do," Thibeault said Thursday.

Wynne dismissed critics who say the government has the power to ignore the energy board’s decision and tell utilities to add a line item on natural gas bills.

"They have made this decision independently of government," she said. "We will continue to be transparent with the people of Ontario about why it’s important to have a climate change action plan, why we need a price on carbon."

The New Democrats said the Liberals told utilities to put a 10 per cent discount as a separate line item on electricity bills and label it as the "clean energy benefit," and should do the same with the carbon tax.

The Liberals "are trying to hide behind" the energy board instead of being open with consumers, said NDP Leader Andrea Horwath.

"They’re trying to pretend it was the OEB’s decision when it was absolutely up to the Liberal government to do the right thing and be transparent on this new charge," she said.

The Progressive Conservatives accused the Liberals of trying to "bury the evidence" on how much cap−and−trade will cost consumers each month.

Utilities argued for a separate line on bills to provide transparency to customers about the cost of cap−and−trade, which will see companies buy and sell pollution credits to reduce Ontario’s greenhouse gas emissions.

Thibeault insisted nothing was being hidden, and said the government was being transparent about the cost of cap−and−trade just by talking about the new fee.

The minister walked away from reporters without answering when asked if the energy board now sets policy for the Liberal government.

The Liberals expect their climate change plan will add about $5 a month to home heating bills and about 4.3 cents a litre to the price of gasoline.

Ontario will join an existing cap−and−trade market with California and Quebec next January, mandating pollution limits on companies but allowing them to buy emission credits or sell them to others if they are under their quota.

The province plans to spend up to $8.3 billion on programs to encourage people and companies to switch to more energy−efficient heating systems, cars and other low−carbon technologies.

Most of the money will come from cap−and−trade, which the Liberals predict will raise $1.9 billion a year.