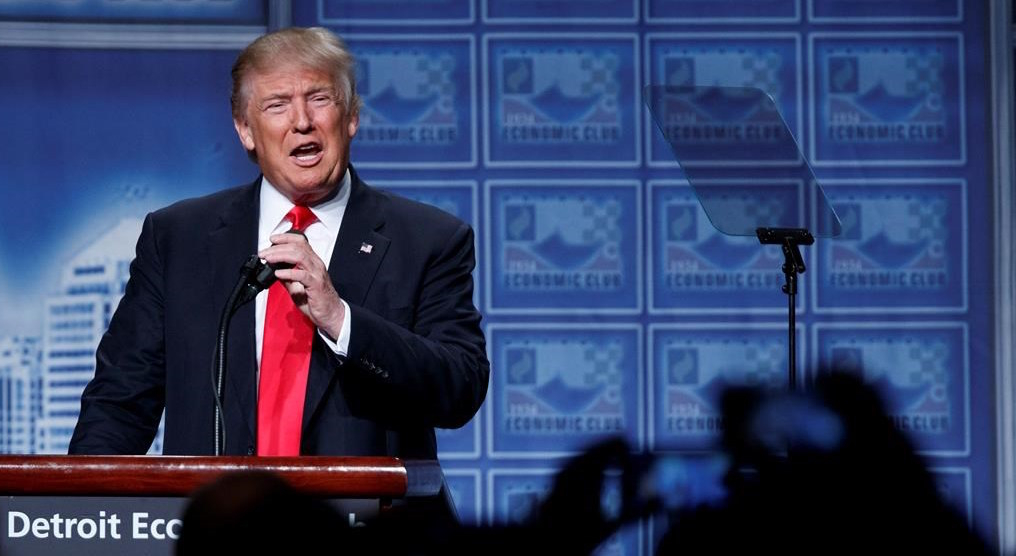 Donald Trump has moved to stop the bleeding of support from his own party with the balm of traditional Republican economic medicine: wide−ranging deregulation and tax cuts.

The Republican nominee proposed a plan to shrink government and grow the economy with an across−the−board regulatory reduction and tax cuts that would apply to wealthy estates, companies, and several classes of individuals.

He would end American participation in the global climate treaty; scrap the current president’s climate−change regulations; and, according to a campaign document he released Monday, invite TransCanada Corp. to re−apply for a permit for the Keystone XL pipeline.

Speaking in Detroit, he compared his policies to those of Ronald Reagan, the secular saint of modern Republicanism. One thing Trump didn’t address was how he’d avoid a less−heralded legacy of the Reagan years — a near−tripling of the U.S. federal debt, as spending cuts never kept pace with tax cuts.

Of his proposed moratorium on new federal regulations, and his request for every federal department to eliminate old growth−hampering ones: "It is time to remove the anchor dragging us down. And that’s what it’s doing — dragging us down."

The speech also included elements aimed at the more left−leaning shades of the political spectrum. He reiterated his promise to renegotiate NAFTA, said his daughter Ivanka was working on a plan to make child care tax−deductible, and proposed ending a carried−interest loophole tilted toward the wealthy.

But the big−money promises were borrowed heavily from the traditional Republican recipe−book.

He proposed ending the estate tax, which applies to a tiny percentage of families that bequeath more than $5 million. That measure would immediately reduce U.S. federal revenues by 0.6 per cent, but lead to greater economic growth, according to analysts from the non−partisan Tax Foundation.

He would model his income−tax plan on the one proposed by conservatives in the U.S. House of Representatives — reducing the rate for top−income earners by six per cent, with three−per−cent reductions for middle−income earners. The similar House Republican plan would reduce federal revenues by trillions, but according to the Tax Foundation spur longer−term growth of 9.1 per cent of GDP.

Trump would go even further in cutting corporate taxes than House Republicans. He would bring the U.S. rate, one of the highest in the world, from 39 per cent down to 15 per cent — far lower than Canada’s, and lower than the House GOP’s proposed rate of 20 per cent.

It remains to be seen whether his invoking Reagan’s legacy will bring the Gipper’s disciples back to the fold. Several alarming bits of news Monday illustrated Trump’s problems with the upper crust of his own party:

—A new Monmouth University poll was the latest to show him losing badly — this one by 13 percentage points nationally. Republicans were a big reason for that. He only had support from 79 per cent of self−described Republicans, compared to Hillary Clinton who had 92 per cent of Democrats onside.

—Trump was losing college grads in that poll by 24 per cent and women by 28 per cent.

—He was repudiated by 50 people who worked in national security under Republican administrations. Several famous Republicans signed an open letter saying they would not vote for Trump because he’s erratic, ill−informed, unqualified, and would endanger the country as president.

—The chief spokesman for the Florida Republican party announced he was quitting to take a position with an outside conservative group because he wants to avoid working for Trump.

One consistent plank of his economic platform is clearly at odds with the U.S. Chamber of Commerce wing of the Republican party. Trump continued his attack on trade deals. He promised not to join the Trans−Pacific Partnership, and said of NAFTA: "If we don’t get a better deal, we will walk away."

He didn’t mention another Canadian file in his speech — the Keystone XL oil pipeline. A highlights package of his economic plans, released by the Trump campaign, said he would invite TransCanada to renew its permit application.

The Calgary−based pipeline company is suing the U.S. government for cancelling the project, saying President Barack Obama’s refusal to grant a permit was arbitrary and driven by politics.

The company says its agreements with landowners along the route remain in effect, and that the project could be restarted.