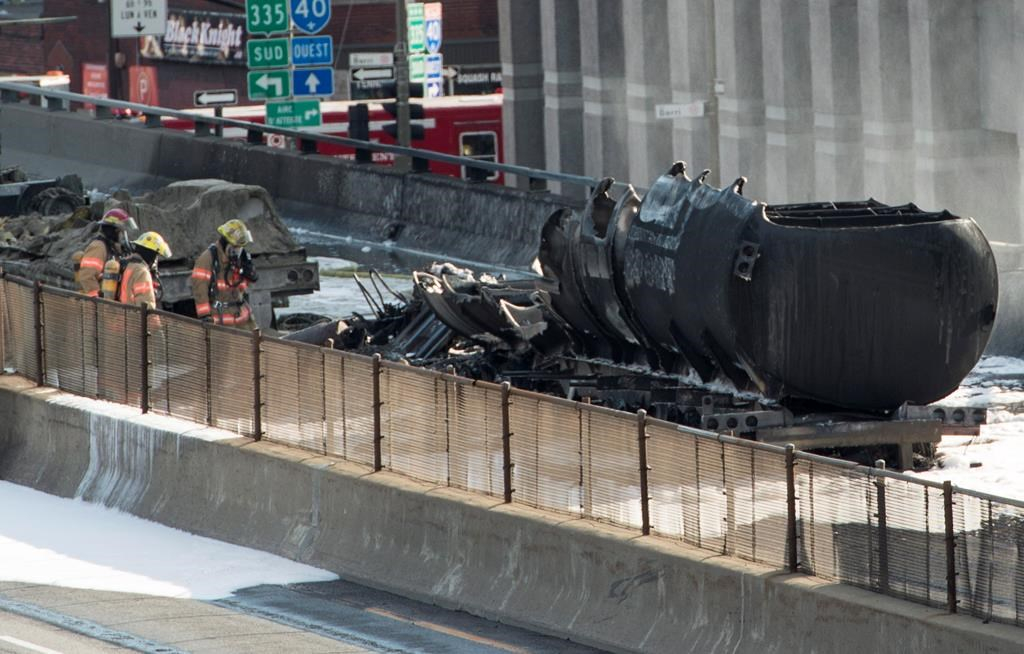 Traffic is brought to a standstill following a fiery and fatal crash on a major Montreal highway on August 9, 2016. Photo by The Canadian Press.
Previous story

One person died and six others were injured Tuesday after a tanker truck carrying what authorities said were hazardous materials crashed on a highway in Montreal and erupted in flames.

Provincial police spokesman Jimmy Potvin said the victim, the driver of the tanker truck, was a man in his 40s.

Potvin said four vehicles collided on the raised autoroute in the city's north end at about 4 p.m.

The City of Montreal said about 100 firefighters battled the blaze and had most of it under control by 6:30 p.m.

Emergency services said six people were injured in the crash. Two were taken to hospital with minor injuries.

Video taken by helicopter and broadcast by French-language network TVA showed a man trying in vain to open the door of the tanker, seemingly trying to rescue someone inside.

The man is seen running around the front of the truck and trying to pry open doors on each side of the vehicle before noticing the growing flames and running away.

Flames and black smoke several metres high could be seen billowing from the raised autoroute, forcing the city to close a section of the highway.

The City of Montreal said in a news release the tanker was carrying "hazardous materials," while fire officials described it as diesel fuel.

Potvin said the stretch of highway where the crash occurred was under video surveillance, which he said would help investigators determine how the collision happened.