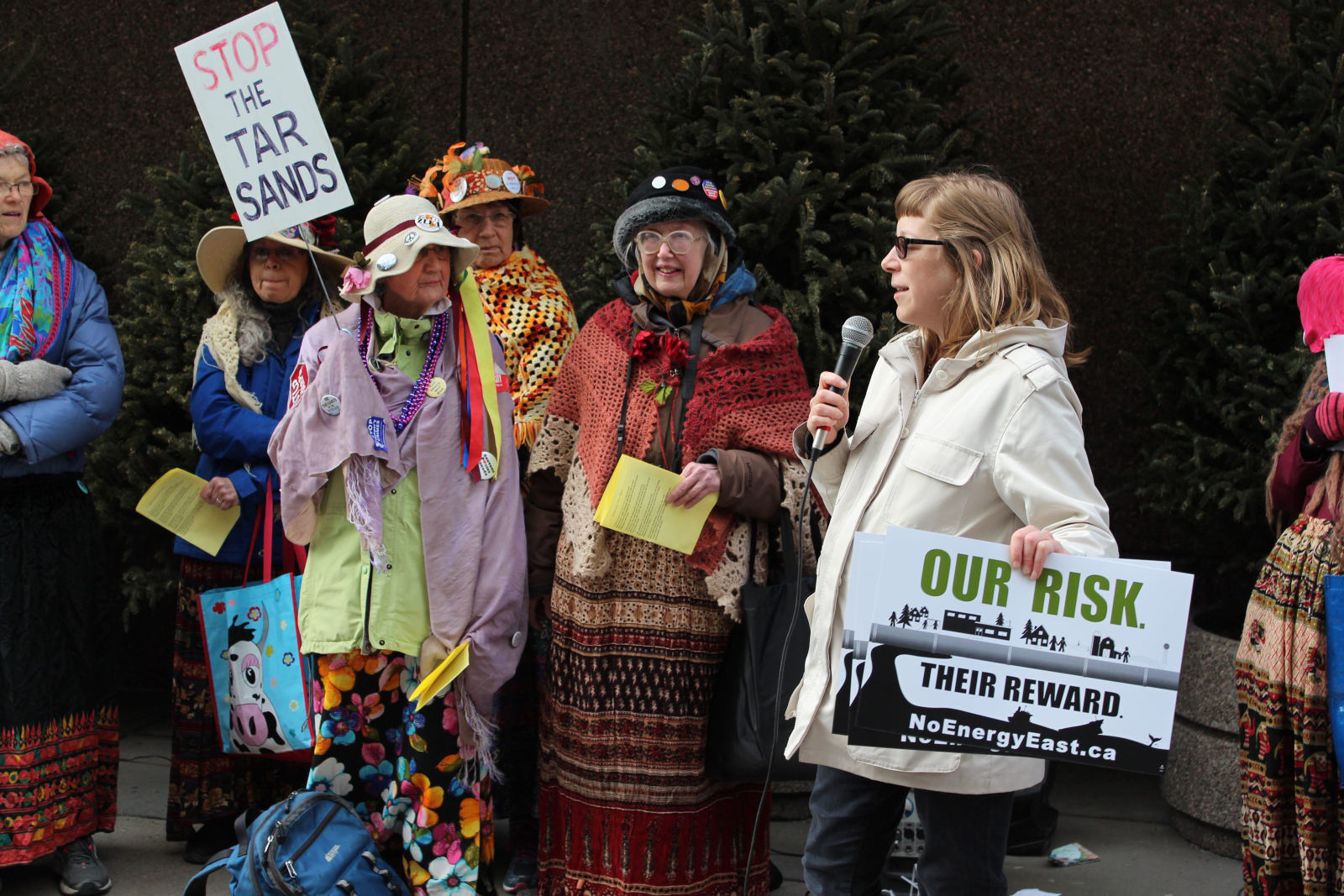 Anti-pipeline protesters, including Andrea Harden (right) from the Council of Canadians, demonstrate their opposition to TransCanada Corp's Energy East project outside an Ottawa hotel on April 21, 2016. Photo by Mike De Souza.
Previous story
Next story

Three dozen advocacy groups across Canada are calling for an immediate suspension of federal hearings reviewing the Energy East pipeline project and a public inquiry into the actions of the national energy regulator.

In a letter sent on Tuesday to Natural Resources Minister Jim Carr, the groups, including Greenpeace Canada, the David Suzuki Foundation, the Association québécoise de lutte contre la pollution atmosphérique, Nature Québec, and the Council of Canadians, urged the government to intervene over what is becoming known as the Charest affair.

The controversy erupted one month after National Observer reported that senior National Energy Board (NEB) officials, including chief executive Peter Watson along with two panelists reviewing TransCanada Corp's Energy East pipeline proposal, had met privately with former Quebec premier Jean Charest in January 2015 when the former politician was on the payroll of the Calgary-based energy company.

The revelations have already prompted one serious legal challenge to the ongoing federal hearings and are threatening to disrupt the entire process before the NEB. The NEB has the powers of a federal court and has a duty to be fair and impartial in all of its proceedings.

Although the NEB initially said it wasn't aware of Charest's contract and that it didn't discuss Energy East in its private meetings, it apologized in August after it was forced to release documents requested by National Observer through access to information legislation that revealed the TransCanada project was on the agenda. Under NEB rules, its employees and representatives are not allowed to privately discuss matters that are before the Board and it must keep detailed records of any discussions related to an ongoing review and make them public.

Energy East is a proposed 4,500-kilometre pipeline that, if approved, would ship up to 1.1 million barrels of oil per day from Alberta, Saskatchewan and North Dakota to refineries in Quebec and New Brunswick, with most of the crude expected to be exported overseas.

Oil producers have strongly endorsed the project saying that it is the key to new jobs and growth in a sector that has been hammered by slumping global commodity prices. Environmentalists, some First Nations leaders and local mayors are fiercely opposed, arguing that it would lead to spills and prevent Canada from meeting its climate change goals.

The 36 groups that signed the letter said that the private NEB meetings with Charest and others, including Montreal business leaders and at least one Quebec environmental group, Équiterre, have tainted the review process.

"We believe the transparency, impartiality and integrity of the review process for the Energy East pipeline project are now under question," said the letter to Minister Carr, released on Tuesday. "It is crucial that light be shed on the circumstances surrounding this meeting (with Charest) in order to restore the public’s confidence in the NEB, which must be beyond reproach in terms of its impartiality and rigour as it evaluates the Energy East pipeline project."

The letter follows the introduction of a formal motion by Montreal lawyer Dominique Neuman before the NEB Energy East hearings that calls for the recusal of two panelists who participated in the private meetings, Jacques Gauthier and Lyne Mercier. Neuman's motion, sent on behalf of Stratégies Énergétiques and AQLPA, also called on the NEB to reassign any senior officials who were involved or had knowledge of the meetings, including the chief executive, Watson.

New Democratic Party ethics critic Alexandre Boulerice has also sent two letters to Parliament's lobbying commissioner, Karen Shepherd, asking her in July, and again in August, to investigate what happened in the meeting with Charest.

The NEB issued a letter last Friday confirming it would "consider" Neuman's motion. This could require the participants from the private meetings to testify and be subject to cross examination. But the NEB has declined to answer questions from National Observer about the topic since last Thursday.

TransCanada declined to comment on Neuman's motion as well as the new letter sent by the 36 groups on Tuesday.

Carr's office confirmed it had received the letter, explaining that bureaucrats at his department, Natural Resources Canada, had already discussed the matter with the NEB.

"The National Energy Board (NEB) has assured NRCAN officials that at no time did NEB officials permit any inappropriate discussion at this meeting," said Carr's press secretary, Alexandre Deslongchamps, in a statement sent to National Observer.

The groups said that the NEB has failed to protect the integrity of the process and questions why the chief executive, Watson, who attended the meetings, did not correct the Board's public statements from July when it denied discussing Energy East in private.

"This is why we urge you to make sure the National Energy Board suspend the commission’s work and hearings, and put in place an independent, objective and transparent investigation that can provide a full account of this situation regarding the current Commissioners," the groups wrote in the letter to Minister Carr.

"We also ask that the Chairman and the commissioners involved in the meeting be removed from the Energy East panel and as NEB commissioners. Without such action, the overall Energy East evaluation process will remain tainted by serious misconduct and Canadians will not be able to trust its conclusions."

Carr's office noted that the government is proceeding with plans to modernize the NEB and that it would announce an expert panel in the coming months to review the federal regulator's role mandate and structure.

"The government of Canada is taking action to ensure environmental and regulatory processes and decisions are based on science, facts, evidence, traditional knowledge of Indigenous Peoples and with meaningful consultation of Indigenous groups," said Deslongchamps.

"While the government modernizes the NEB, it has announced interim principles that apply to projects currently under review. These principles will ensure predictable and timely assessments which are based on the best science and technology and meaningful engagement with Indigenous communities."

Here's a copy of the original statement sent to National Observer from NEB director of communications Craig Loewen on July 7, 2016:

The meeting with Jean Charest was setup at the request of the NEB.

The meeting was setup prior to organizing the Quebec component of the NEB’s National Engagement Initiative with the purpose of asking Mr. Charest for his thoughts on how the NEB could effectively engage in Quebec and which stakeholders the NEB might consider meeting.

NEB Board members and staff in attendance advised Mr. Charest that they would not be able to discuss any hearing applications before the NEB, including Energy East.

The NEB was not aware at the time of any contracted work Mr. Charest may have had.

The NEB was not lobbied in any way during this meeting and the Energy East proposal was not discussed. No other hearing processes were discussed.

Mr. Charest suggested several individuals and groups that the Chair could meet with including: municipalities and mayors; environmental non-governmental organizations, and agricultural groups. A list of individuals and groups the NEB met with during the National Engagement Initiative from Quebec can be found in the NEB’s report at http://www.neb-one.gc.ca/glbl/ccct/ntnlnggmnt/2016rprt-eng.pdf.‎

Here's a copy of the NEB's statement to National Observer on Aug. 4, 2016 when it released records about the meetings in response to requests made through access to information legislation:

In January of 2015 the NEB Chair, two board members, and two staff members met with several individuals and groups in Quebec, including Jean Charest. The purpose of these meetings was to better understand how the NEB could effectively engage in Quebec and which stakeholders the NEB might consider meeting.

The NEB was not aware of any contracted work Mr. Charest may have had at the time.

On July 7, I received your media request about whether Energy East was discussed at that meeting.

I discussed your request with two of the meeting attendees from the NEB. I responded to your media request in good faith indicating that Energy East had not been discussed based on recollections of the meeting that had occurred over a year earlier.

In the weeks following, the NEB received a ATIP requests for records relating to the meeting. After conducting a thorough search for records, staff found handwritten notes from the meeting that we were not aware of when we responded to your media request. The notes include reference to TransCanada’s work in Quebec. I’ve included a copy of these notes in this email. Additionally, NEB Board Member, Jacques Gauthier, mentioned Energy East in an email to Mr. Charest’s assistant. A copy of this is also attached in this email.

When an individual or group brings up an application during a meeting with Board Members, they are advised that we can’t discuss the substance of the application but we can speak to the process aspects of the application. While those we met with, at times, wanted to discuss pipeline projects that were being adjudicated upon by the Board, at no time did the NEB officials at the meetings permit any inappropriate discussion of those matters.

The NEB sincerely apologizes to you and your readers that this material was not provided at the time of your media request. While there was no ill-intent in our response, the Board deeply regrets that our search for records at that time was not comprehensive and that our response did not accurately reflect the meeting.