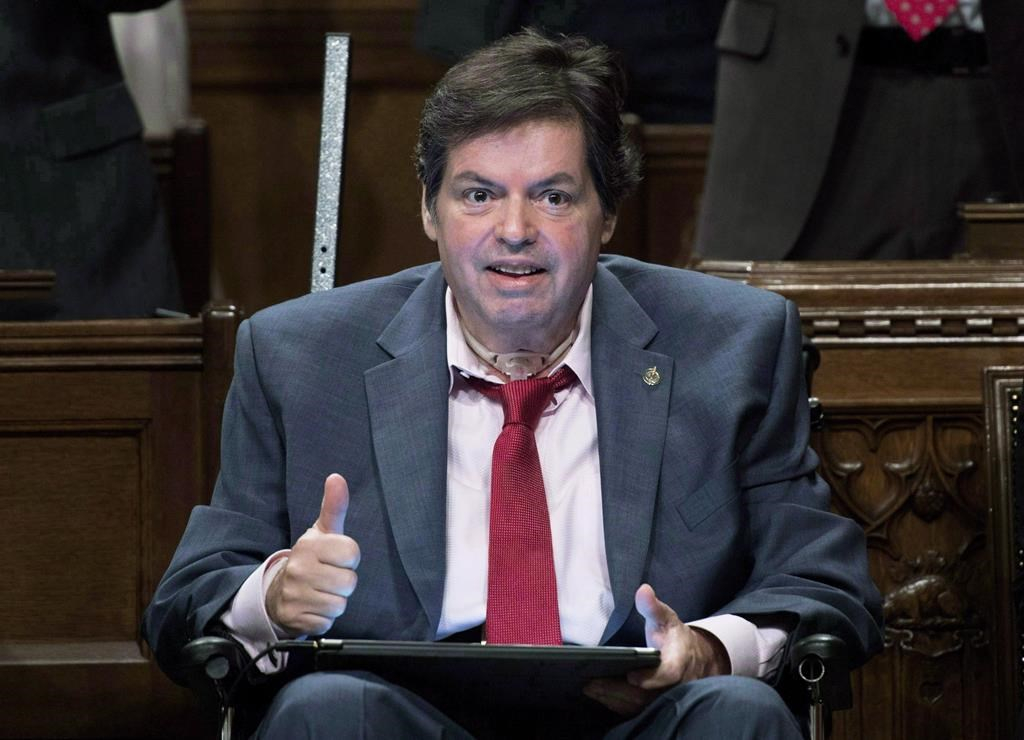 Mauril Belanger gives the thumbs up as he receives applause for defending his proposed changes to neutralize gender in the lyrics to "O Canada" in the House of Commons in Ottawa on May 6, 2016. Photo by The Canadian Press.
Previous story

Mauril Bélanger, a Liberal member of Parliament for more than two decades and a lifelong advocate for francophone rights in English Canada, has died after a very public battle with an incurable neurodegenerative disease.

"Mauril Bélanger has passed away. He was a great friend, tireless MP and brave fighter," Trudeau tweeted. "The entire Parliamentary family mourns his loss."

Mauril Bélanger has passed away. He was a great friend, tireless MP and brave fighter. The entire Parliamentary family mourns his loss.

He was diagnosed with the devastating disease in November 2015, just weeks after winning re-election in his Ottawa-Vanier riding for the eighth consecutive time since entering federal politics in a February 1995 byelection.

News of Bélanger's death triggered a flood of tributes from those of all political stripes on Tuesday night.

Interim Conservative leader Rona Ambrose called Bélanger a friend and a "great parliamentarian," saying on Twitter that she would miss him.

NDP Leader Tom Mulcair described Bélanger as a "very well-liked and respected colleague," and sent condolences to the politician's loved ones.

Saddened to learn of the passing of Mauril Bélanger. Very well-liked and respected colleague. Our condolences to his loved ones.

And a number of Liberals expressed their sadness at losing one of their own.

Immigration Minister John McCallum added: "He was a champion of the people."

Mauril Belanger's fight for language rights + women's equality will be his lasting legacy. All our love to Catherine.(2/2)

I am deeply saddened to hear of the loss of my dear friend Mauril Belanger. He was a champion of the people. My condolences to his family.

ALS began its progressive toll on Bélanger by affecting his power of speech, a doubly cruel blow for a man dedicated to language rights who was poised as the front-runner to be elected Speaker of the House of Commons under the Trudeau Liberal government.

He withdrew from the race, but not from public life.

On Jan. 27, 2016, Bélanger made history when he became the first MP in the House of Commons to use an electronic voice, re-introducing his private member's bill on gender neutral lyrics for O Canada using tablet software that converted pre-programmed text to speech.

Here is an update on my private members' bill which aims at rendering our national anthem gender inclusive https://t.co/35ONmTX2kq #cdnpoli

It was the second time Bélanger had attempted to make O Canada, in his words, more "gender inclusive" by changing the line "in all thy sons command" to "in all of us command." The first such bill was defeated at second reading in April 2015. The re-introduced bill cleared its final hurdle in the House of Commons in June 2016.

Bélanger was honorary Speaker for a day in March

On March 9, 2016, Bélanger was made honorary Speaker for a day and sat in the Speaker's chair for about 20 minutes during member statements and the start of the daily question period, communicating via his tablet computer.

"I salute you, as the honourable member for Ottawa-Vanier and as Speaker, for the dignity and grace that you bring to the House every day as you battle this terrible disease," Trudeau told him that day.

Remarkably, Bélanger had just returned from a trip to South Africa and Namibia as chair of the Canada-Africa Parliamentary Association, a group he co-founded in 2003.

"The sheer determination of getting on an aircraft and using a walker, cane, using the new technology to communicate ... going to 99 per cent of the meetings," recalled Sen. Jim Munson, who accompanied Bélanger's delegation.

"He had great pride of place. He was living in that moment, each and every time."

Bélanger was named national honorary spokesperson for Walk for ALS, an annual fundraiser run across Canada by provincial ALS societies to support both research and the lives of ALS sufferers, who number between 2,500 and 3,000 in Canada.

"I call on everyone to join me and to participate in a Walk in their community, so that support for people living with ALS is available today, and critical research is funded, providing hope for the future," he said via his tablet.

Bélanger was a native of Mattawa, Ont., and his mother was a community advocate for the local francophone community.

The second of five children — he has three surviving younger brothers — had to bus 60 kilometres to North Bay in order to attend a French high school, then later studied English literature at the University of Ottawa as a way to improve his second language.

"As a popular figure Montferrand came to embody the ideals, ethics, and aspirations of the French Canadian community," according to the Dictionary of Canadian Biography.

Whatever the influences, Bélanger was a lifelong advocate of minorities in general and Franco-Ontarians in particular.

He was also a dyed-in-the-wool political animal, serving two terms as president of the University of Ottawa student federation in the mid 1970s.

"For two years I didn't study much but I learned a hell of a lot," Belanger told the Fulcrum, the university newspaper, in 2015.

His only non-political or public administration job was a stint as a stock broker in the mid 1980s, having begun his working career on Parliament Hill as an assistant to the late Jean-Luc Pepin, who was Liberal transport minister from 1980 to 1983.

It's worth noting that Pepin had just served as co-chair of the Task Force on Canadian Unity, which recommended in 1979 that language rights be entrenched in the Constitution.

In an October 2015 interview with the Fulcrum, Belanger said his student union work and Pepin's mentorship helped shape his parliamentary demeanour. "He told me, 'Mauril, if you ever become an MP, you have to learn to deal with all parliamentarians no matter their colour.' And that's my behaviour in the House, I've never engaged with the hurling of insults and that was a lesson I picked up from the university."

Bélanger served for a time as chief of staff to Peter Clark, the chairman of the regional municipality of Ottawa-Carleton, and later was instrumental in fighting to save Ottawa's French-language Montfort teaching hospital.

He co-founded the Canada-Africa Parliamentary Association and sat on the board of the Parliamentary Centre, a non-governmental organization whose aim is "help legislatures measure their performance, build capacity, tackle key issues and promote mutual learning."

He was also a great advocate of co-operatives and, in 2014, wrote an op-ed for the Pearson Centre that wedded his love of Parliament with his passion for co-operative ventures.

"I believe we need to apply the model offered us by the co-operative sector to the business of the nation. We should be partners, not enemies, collectively invested in making Parliament work for the benefit of Canadians," wrote Bélanger.

He and his wife, Catherine, have a son and three grandchildren.