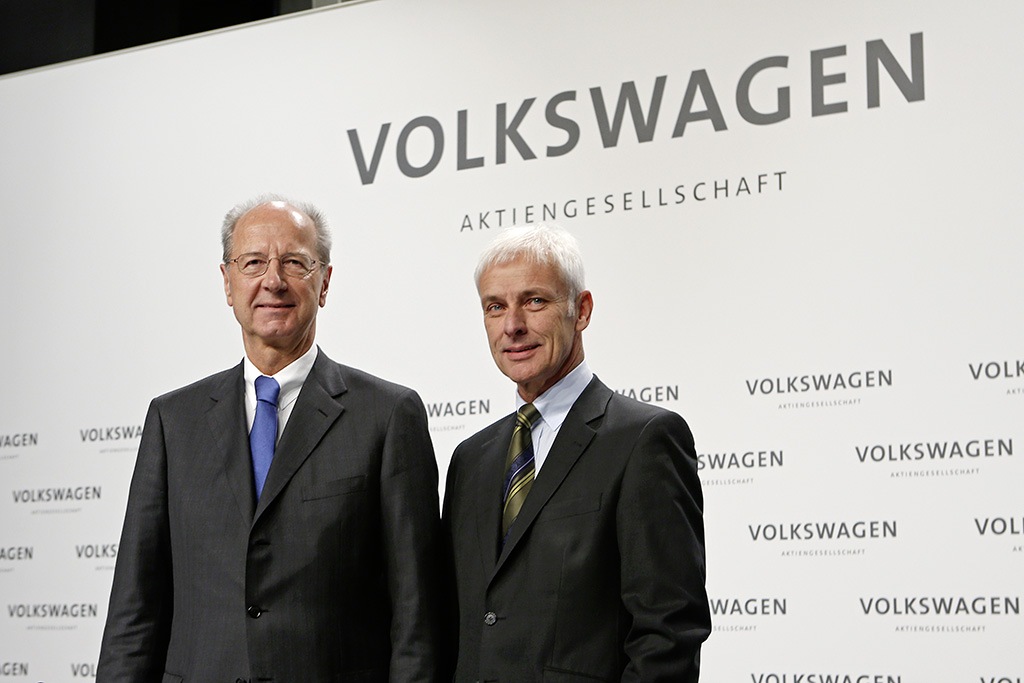 CEO Mathhias Mueller of Volkswagen AG, the company embroiled in the emissions cheating scandal rocked the auto industry in 2015. Photo from Volkswagen.
Previous story
Next story

Canadian Volkswagen owners are fed up with their government's sluggish response to the Volkswagen emissions cheating scandal.

VW is facing the prospect of a $15-billion settlement in U.S. federal court for selling cars that were designed to cheat on emissions tests spewing out up to 40-times more toxic emissions than advertised. But motorists say they haven't seen any signs of life from the Canadian government, apart from a strongly-worded statement from the former Harper administration during the last federal election campaign.

In fact, up until the past week, one federal department in Canada was even endorsing Volkswagen vehicles on its website for being environmentally-friendly cars.

Regulators place limits on the toxic emissions from diesel-powered vehicles since they can cause smog and lead to premature deaths. Volkswagen claimed its cars were green and met federal pollution standards but the company had designed them to meet emissions standards only when being tested in government labs, and not on the roads.

The U.S. settlement includes a plan to reduce air pollution by forcing Volkswagen to spend up to $2 billion on new charging stations for electric vehicles and promote a green shift in the country's transportation sector. But in Canada, where the government recently announced a taxpayer-funded plan to spend millions on electric car infrastructure, regulators haven't publicly proposed any ideas to punish the German auto manufacturer over the deadly emissions spewing from its cars.

Environment and Climate Change Canada said in a statement sent to National Observer that it would be inappropriate to provide further information regarding a Canadian settlement while its investigation is underway.

The radio silence has driven TDI Owners in Canada to the web to air grievances about the settlement process and seek mutual support from fellow victims. Many have joined in class action lawsuits against the company, but the general sentiment is that the U.S. is on top of this scandal and taking action, while the Canadian government appears "powerless" to protect consumers or punish the company.

In response to one tweet from a TDI owner asking for "answers and less delays," Environment and Climate Change Canada said that "VW Canada has advised that once a vehicle remedial plan is finalized in the U.S., the company will follow suit in Canada."

In another post on the 2,000-member Facebook group for Volkswagen TDI owners, Richard Wilson summed his feelings: "the most depressing news is that the government seems powerless to force a settlement on VW."

In addition, the companies will spend another $4.7 billion to mitigate pollution from those cars and invest in green vehicle technology, including the $2-billion earmarked for zero emissions vehicle programs.

The Canadian government has reached no such settlement with VW Canada.

"Are there two legal systems?" One for big business and one for the rest of us?

John Bennett, senior policy advisor with Friends of the Earth Canada, believes it's because the government tends to shy away from standing up to the auto-industry.

But he said the company, which admitted to cheating soon after the scandal broke, should be prosecuted for misleading every single customer who bought a vehicle.

"It is unbelievable VW Canada hasn't been charged with fraud and with violating fuel economy and emissions regulations,” Bennett said. ”Are there two legal systems, one for big car companies and another for the rest of us?"

He added that the U.S. government has taken some reasonable steps, while Canada is falling behind. And at a time when the absence of adequate electric car charging infrastructure is one of the biggest barriers to the deployment of zero emissions vehicles, he believes the Canadian government should also pursue the option of getting Volkswagen to help finance charging stations.

A spokeswoman for Toronto-based Environmental Defence agrees that companies that break environmental rules should be required to contribute to solutions.

“Penalties should not just narrowly penalize the company at fault, but should also offer solutions that provide economic, social, and environmental benefits to Canadians,” said Mikayla Wujec, who coordinates the clean economy campaign for the environmental group. “We don’t want to just punish bad corporate behaviour, but set an example by encouraging good corporate behaviour.”

Scientists recently estimated that the excessive pollution from the cheating Volkswagen vehicles, from 2008 and 2015, would have contributed to about 59 premature deaths. Their peer-reviewed study, published in the journal Environmental Research Letters found that these cars could cause about 140 more deaths after 2016 if there are no recalls. But up to two thirds of those deaths could be avoided if all the cars are removed from the roads this year, the research said.

And while motorists await action from the Canadian government, one federal department, Natural Resources Canada, was continuing to endorse many Volkswagen vehicles as fuel efficient on its website up until August 15. NRCan said its information on the web only covered carbon dioxide emissions and fuel consumption, not the “smog-forming" fumes that got the German automaker into trouble.

A spokesman for the company also said the page originally showcased 2014 vehicles, which included VW automobiles sold in Canada at the time. NRCan has since updated the page to reflect 2016 models, which does not include 2016 VWs since they are not available for sale in Canada.

Barrie, Ontario VW TDI owner Waqas Mubarik can't afford another vehicle and is concerned that he is being penalized because of the time it's taking to resolve the issue. The longer the investigation drags on, the less he's going to get in compensation, he said.

“In the U.S., they say the buyback will depend on the mileage as well. So the more they drag this process, the lower price we’re going to get," Mubarik said. "I cannot afford another vehicle at this time. I have to drive this one, and I’ll be putting more mileage on it. When the buyback program comes up, I won’t get the money I deserve."

He owns one of the 100,000 Volkswagen "clean diesel" vehicles sold in Canada between 2009 and 2015 that the company equipped with software to trick government regulators into measuring emissions at drastically lower values than the cars were actually polluting.

“I feel like I’m driving 40 cars at the same time because they have 40-times more nitrous oxide [emissions],” he said.​​

Mubarik said he would consider buying an electric vehicle if the federal government rules that Volkswagen should invest in zero emission vehicle programs under a similar penalty to that in the U.S. settlement.

“Subconsciuosly, you could say that we were waiting for the same outcome as in the States on July 29. Even their dealerships started calling us saying we’d have answers. We were mentally prepared to see the results," he said.

“Electric vehicles are now the future. Toyota and other companies have said they’re going to be completely electric by 2025. I know many people don’t like electric because, for now, they don’t have much range on the batteries. But it is coming."

The Canadian government has set aside $62.5 million in the 2016−17 budget so Natural Resources Canada can help businesses install workplace fueling stations for electric cars, as well as natural gas and hydrogen−powered vehicles.

Environment and Climate Change Canada declined to answer questions about whether or not Volkswagen's settlement with the federal government would force the manufacturer to invest in further electric vehicle infrastructure.

Volkswagen Canada spokesman Thomas Tetzlaff told the Business News Network last week that "our hope is to provide remedies to Canadians on pace with U.S. customers.”

The company said they’d update Canadians duped by the cheating scandal on July 29, 2016 regarding the Ontario class action lawsuit filed against them. In the end, the update said that “discussions are ongoing.”​

Law firms in Canada were quick to take action after the scandal broke, with one Regina-based office having filed nine class action lawsuits as of June 28, 2016, representing over 11,000 claims, and hundreds more individual cases.

“In the event that a settlement agreement is reached earlier, the parties will advise the court and request an earlier appearance,” Tetzlaff said over email.

​Keith Stewart, a climate and energy campaigner with Greenpeace Canada, said the Canadian government needs to start pushing the company to help consumers and protect the environment.

"The Americans are making it very clear: If you break the law in emissions, you pay a heavy price," Stewart said in an interview. "They've been sending this message ever since the scandal first broke."

But he said that sending out warning letters from the regulator isn't going to cut it.

"I think the Canadian approach has typically been to issue warnings whereas the Americans usually bring in big penalties... And I think that when you speak to a company's bottom line, you speak to what they hold most dear and that's what's going to result in stronger compliance than getting a strongly-worded email."

-With files from Charles Mandel and The Canadian Press

Asking questions are truly good thing if you are not
understanding anything fully, except this article offers pleasant understanding even. http://www.gaycockboys.com/video/brokestraightboys-full-videos-GVHgcpOEX...

No matter if some one

No matter if some one searches for his vital thing, thus he/she desires to be available that in detail, so that thing is maintained over
here. http://www.gaycockboys.com/video/straight-guys-galleries-mjhkcwgKfO7.html