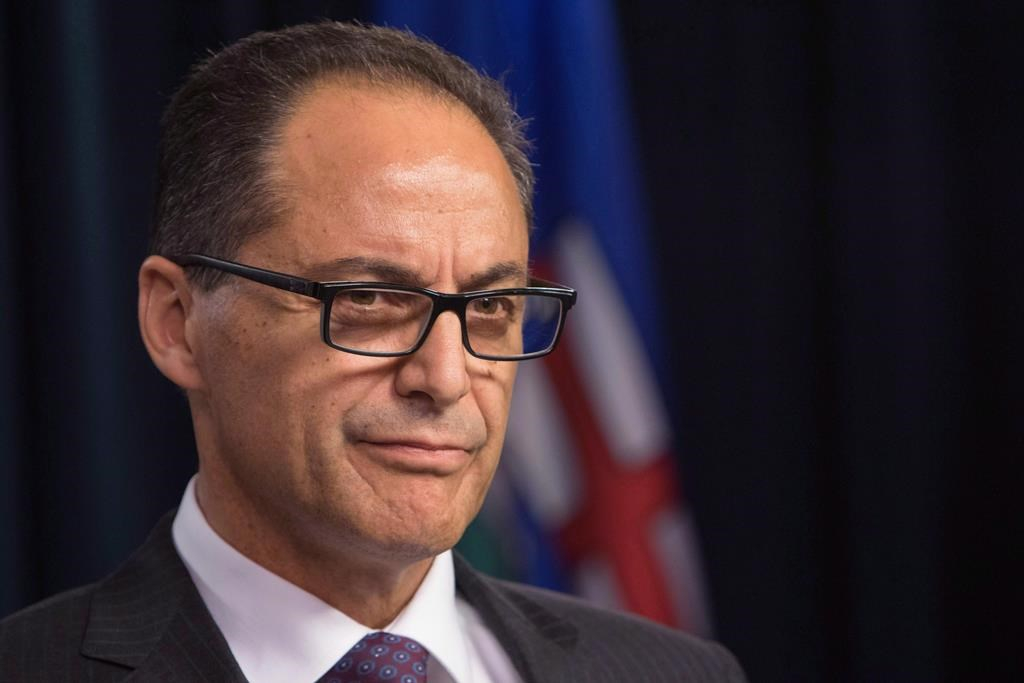 The devastating Fort McMurray wildfire is expected to torch Alberta’s bottom line by about $500 million this year.

Finance Minister Joe Ceci says he has had to revise the projected deficit upward in his first−quarter fiscal update to almost $11 billion from $10.4 billion.

"I don’t need to tell my fellow Albertans that as a result of the oil−price shock, the economic headwinds facing Alberta remain strong. Albertans see that every day. Many are suffering significant hardship," Ceci said Tuesday at a news conference where he released the latest numbers.

"This year those headwinds are blowing even harder as a result of the Wood Buffalo wildfire."

Regardless, Ceci said, the province will stick to its plan of avoiding deep cuts to the civil service, while continuing to accumulate debt to pay for roads, infrastructure, health and education.

The May fire in northern Alberta forced more than 80,000 people to flee for a month and destroyed 2,400 homes and buildings in the oilsands hub city.

Ceci said the province paid out $647 million in disaster relief, a figure reduced to $195 million after federal aid transfers.

On top of that, the province estimates it lost another $300 million in revenue, because the fire severely curtailed oilsands and forestry activity in the area. An estimated 40 million barrels worth of production was lost.

The government forecasts Alberta’s overall oil production for the 2016−17 fiscal year will be down about four per cent due to the shutdown.

Rebuilding parts of Fort McMurray is expected to boost provincial growth in the years to come, but business losses are expected to cancel out any such stimulus this year.

Insurable losses from the wildfires are pegged at $3.6 billion.

The Fort McMurray numbers come on top of gloomy forecasts as low oil prices continue to depress Alberta’s economy, although a modest recovery is predicted for 2017.

Alberta’s real GDP, the benchmark figure representing all of Alberta’s newly produced goods and services, is predicted to fall 2.7 per cent, mainly due to the fire. It fell 3.7 per cent last year. It’s a back−to−back plunge not seen since the last Alberta oil crash in the 1980s.

Real exports were expected to go up by 1.9 per cent. Instead, they’re now predicted to fall 1.7 per cent.

Debt servicing costs have now surpassed $1 billion a year and Alberta’s debt−to−GDP ratio is up to 10.25 per cent.

Opposition Wildrose critic Glenn van Dijken said the NDP needs to create a plan to balance the books by reducing spending and streamlining services, rather than simply wishing high oil prices will return.

"If we don’t act now, it will only mean higher taxes for future generations and less services," said van Dijken.

"It’s evident that the NDP has no intention of being responsible stewards of taxpayer dollars and will forge ahead with their reckless agenda, no matter what it ends up costing Albertans," said McIver in a news release.

Alberta Party Leader Greg Clark said NDP policies are failing Albertans, starting with a hike of the corporate tax rate to 12 per cent from 10 per cent.

"Despite big corporate tax increases, Alberta’s tax revenues are way down and will continue to drop because the NDs have done nothing to create a positive investment climate," Clark said in a news release.

"In fact, they’ve done the opposite."