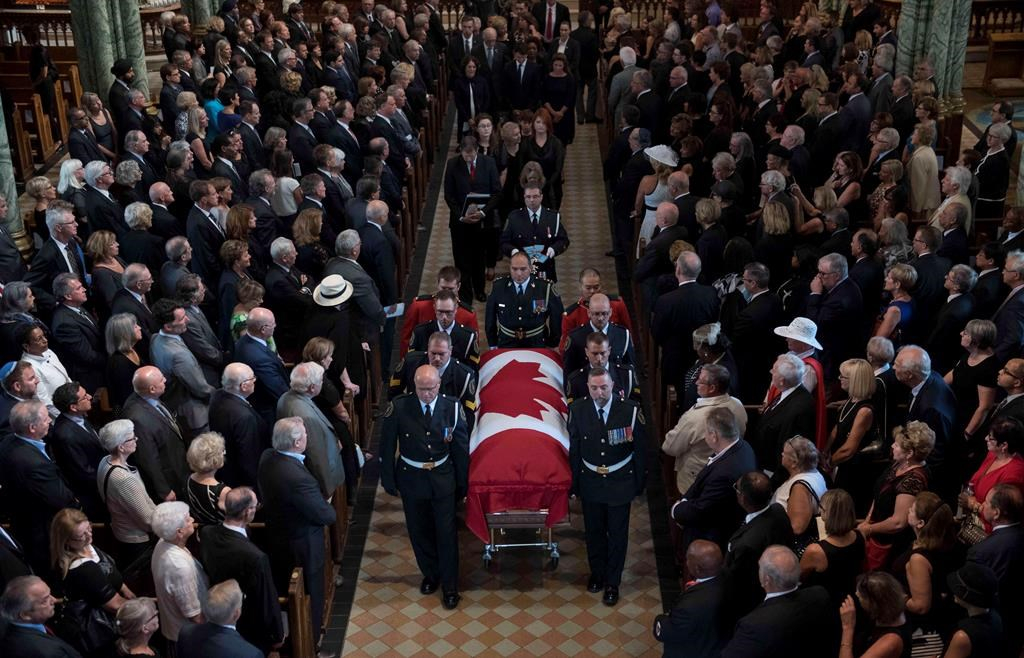 A who's who of Canadian politics turned out Saturday for the funeral of veteran Liberal MP Mauril Belanger, a solemn service that ended on a joyful note — with mourners singing a rousing, gender-neutral rendition of O Canada.

The 61-year-old Ottawa MP, who died last week after a 10-month battle with amyotrophic lateral sclerosis or ALS, had championed a bill to change the English lyrics to the national anthem from "true patriot love in all thy sons command" to "in all of us command."

Hundreds of family, friends, political colleagues and dignitaries, including Prime Minister Justin Trudeau, sang the anthem with the altered lyrics, then burst into applause for the man who didn't let his rapidly deterioriating condition stop him from seeing his bill pass its final hurdle in the House of Commons in June.

"I think what he did for us is really giving our national anthem that extra dimension that is very inclusive of all of us and for this we say thank you," former governor general Michaelle Jean said as she left the service at Ottawa's magnificent Notre-Dame Basilica.

"And we sang it with so much heart."

Belanger's bill must still pass the Senate before the anthem's lyrics are officially changed but no one Saturday was worrying about that technicality.

"There are many more Canadians, generations to come, who may not know Mauril Belanger by name but who will celebrate his commitment to equality and inclusion every time they stand in their classrooms or at a hockey game and sing our national anthem — in both official languages, of course," Trudeau told the mourners.

The prime minister also praised Belanger, a Franco-Ontarian, for his fierce defence of minority language rights and his devotion to his Ottawa-Vanier constituents, whom he served for 21 years. Although Trudeau self-identifies as a Quebecer, he said Belanger never let him forget that he was born in Ottawa and was, therefore, technically a Franco-Ontarian as well.

"We'd joke about it but, you know, I never corrected him on that point because I know that for Mauril, for so many and yes, even for me, being a Franco-Ontarian was a source of tremendous identity and pride and there are few higher compliments from Mauril than to be included in those ranks."

Belanger received the devastating diagnosis that he had ALS, commonly known as Lou Gehrig's disease, last November, just weeks after winning re-election for the eighth consecutive time since entering federal politics in a 1995 byelection.

He had been the front-runner to become the elected Speaker of the Commons but the diagnosis forced him to withdraw from the race. But even as the disease quickly robbed him of his ability to speak and walk, he soldiered on as an MP, using a tablet computer that converted text to speech to reintroduce his bill on the anthem, coming by ambulance to Parliament Hill in June for the final Commons vote on it.

In March, Belanger was awarded an unprecedented honour by MPs from all parties, unanimously named honorary Speaker for a day.

"We saw him hold on, push the limits, stay the course, continue to serve his country with a keen sense of the public interest, the common good and the very values that define us," Jean, now secretary general of the Organisation internationale de la Francophonie, said in remarks during the service.

Among the other dignitaries who attended Belanger's funeral were Ontario Premier Kathleen Wynne, former Conservative prime minister Joe Clark and a host of current and former Parliamentarians from all parties.

Bob Rae, former interim Liberal leader and former Ontario NDP premier, called Belanger "a very dedicated and unapologetic professional politician." Although he was a lifelong Liberal, Rae said Belanger also had an independent streak and could be very blunt.

"He was a remarkable guy because he always told you exactly what he thought — not always what you wanted to hear but it was what he wanted to tell you," Rae said on his way into the funeral service.

For instance, Rae recalled with a chuckle: "When I was running for the leadership, he said ... 'You have a long hill to climb, I won't be supporting you but if you win I will support you.' So, he was very direct."