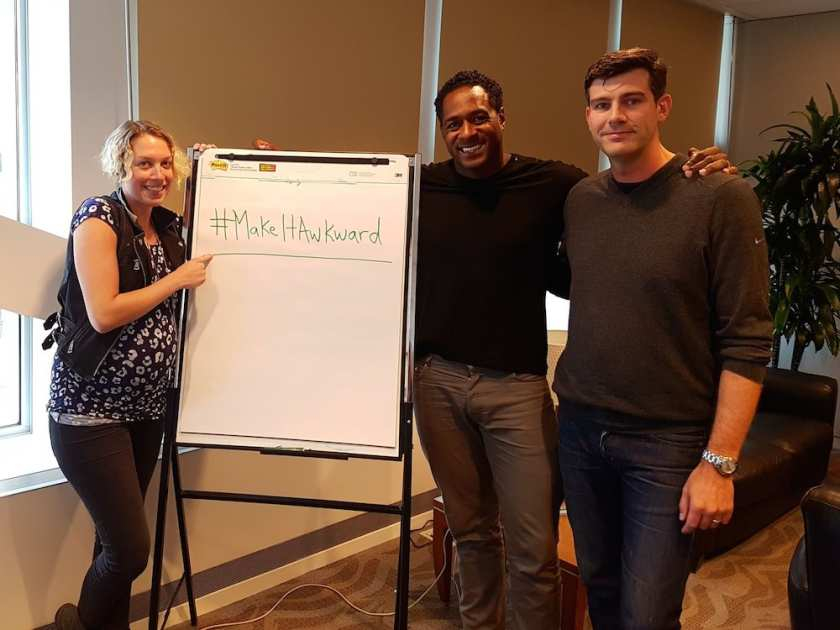 Edmonton's mayor is calling on people to "make it awkward" and call out racism, after a viral video showed someone hurling a racist slur on a city street.

Actor and former high-jump champion Jesse Lipscombe, who is black, was filming a public service announcement this week when he was hit with the verbal assault.

The camera kept rolling as Lipscombe approached a grey, four-door sedan. Lipscombe opened the car door and asked the passenger — a middle-aged white male — if he had anything to say. The man denied he said anything, struggled to close the door and yelled another slur as the car took off.

"It's a thing with me when people make somebody feel uncomfortable, I like to do the same in return," Lipscombe said following the incident. "I'm not a violent man by any means and ... words go a long way, so I thought I'd go over there and have a discussion with him about his decision to say what he said."

Mayor Don Iveson liked that idea so much, he's encouraging others to do the same. After meeting with Lipscombe and his partner Friday, Iveson said they coined the hashtag #makeitawkward as a springboard for an upcoming anti-racism campaign.

"I am so proud of the way he is turning his experience into a conversation started about the need to call out racism and bigotry towards anyone in our community," Iveson wrote on his Facebook page. "Often it's casual and awkward around the dinner table, fire pit, water cooler or locker room.

Lipscombe said he actually welcomed the encounter because it provided a good opportunity to talk about racism.

Lipscombe, who is an actor and personal trainer, was ranked sixth in the world in high jump before the 2004 Summer Olympics in Athens. But a mini-stroke ended his track career. He's also the grandson of Rollie Miles, a former Edmonton Eskimos running back inducted into the CFL Hall of Fame.

In early August, another man said he was subjected to a racial slur while riding his bicycle in the city's downtown. Bashir Mohamed said he accepted an apology from the driver and police decided not to charge the man with a hate crime.

Iveson said it's vital that people speak up.

"Young citizens especially have a role to play in calling out hateful remarks towards any minority group and can set an example," he wrote.

He called on people to share their stories of confronting racism using the hashtag #makeitawkward.

The idea was praised by Winnipeg Mayor Brian Bowman, who has grappled with intolerance after the city was dubbed the most racist in Canada by Maclean's magazine. Bowman called the hashtag a "great new campaign" and called on people to "#MakeItAwkward in every community!"