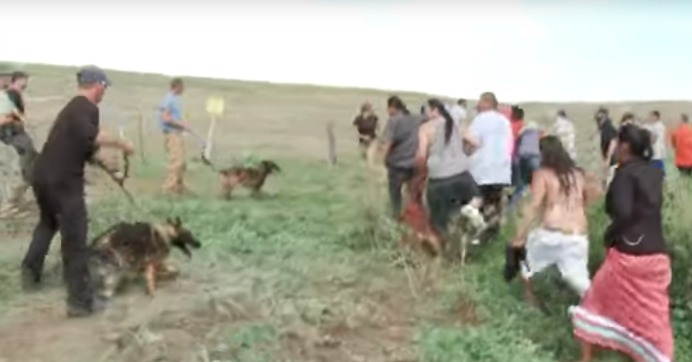 The ongoing Dakota Access Pipeline (DAPL) protests were hit with violence on Saturday, as private security forces reportedly hired by the pipeline builders descended on the Native American activists with pepper spray and dogs that bit and threatened the protesters.

Democracy Now!, which was on the ground at the time, posted several photographs and video of the attack:

In the video, security forces can be seen pushing the dogs to charge at protesters, while others raise cans of pepper spray at the crowds. One man shows a deep bite mark on his arm to the camera, stating, "I was walking, he threw the dog at me, straight, without any warning." A security guard on the scene shakes his head at the man, smiling.

Democracy Now! host Amy Goodman also separately confronts a woman on the security force, stating, "Ma'am, your dog just bit that protester. Are you telling the dogs to bite the protesters?" The woman refuses to answer.

The tense standoff ends as the security team eventually pulls their dogs away from the crowds and drives away.

According to Indigenous activist Martie Simmons, the ordeal saw six protectors, including one pregnant woman, attacked. The dogs also reportedly bit the guards that brought them in. Standing Rock Sioux tribe spokesperson Steve Sitting Bear also told the Associated Press that a young child had been bitten, and 30 people were pepper sprayed.

"This demolition is devastating," Standing Rock Sioux chairman David Archambault II said in a statement. "These grounds are the resting places of our ancestors. The ancient cairns and stone prayer rings there cannot be replaced. In one day, our sacred land has been turned into hollow ground."

For months, the Standing Rock Sioux and dozens of other tribes from the U.S. and Canada have resisted the construction of the proposed four-state pipeline that, if completed, would transport about 500,000 barrels of crude per day from North Dakota to Illinois.

A federal judge is expected to rule by September 9 whether construction on the pipeline must be stopped.

In response to the attack, Red Warrior Camp released a statement which read, "Red Warrior Camp remains nonviolent and unarmed....we ask that supporters keep focus on the fact that this corporation feels justified in using this level of force against unarmed and nonviolent water protectors and the state is allowing it!"

This article was originally published on Common Ground.