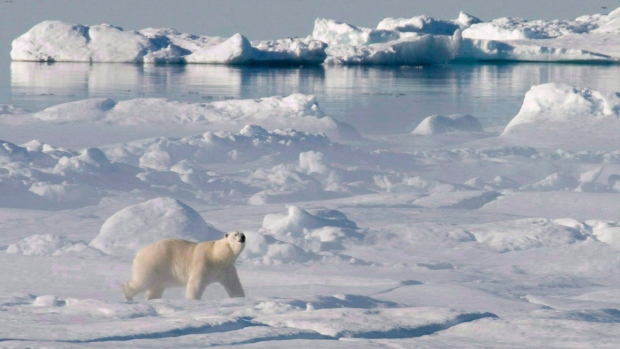 A polar bear stands on a ice floe in Baffin Bay above the Arctic circle as seen from the Canadian Coast Guard icebreaker Louis S. St-Laurent on July 10, 2008. File photo by Canadian Press.
Previous story
Next story

Inuit in Canada and Greenland want to jointly control a unique area of the Arctic Ocean to protect crucial hunting grounds and restore a travel corridor that allowed people to move freely between the two countries.

"The ultimate aim is to pave a way for joint management that is taken care of by Inuit," said Kuupik Kleist, the former prime minister of Greenland.

Kleist is on a three-member panel studying the North Water Polynya, an area of unfrozen sea within the ice pack, for the Inuit Circumpolar Commission.

The North Water Polynya in Baffin Bay is an Arctic marine oasis, the largest in the world. Walrus, whales and polar bears depend on its warmer waters and rich food resources, as do millions of sea birds.

Kleist said Inuit from Greenland and Nunavut hunt the area. They are increasingly concerned about the impact of shipping, oil-and-gas exploration and climate change on the waters they have depended on for food for centuries.

As well, they want to restore the so-called "ice bridge," a route around the north edge of the polynya that allowed Inuit to casually travel between Ellesmere Island and Greenland in dogsleds, snowmobiles and even small planes.

In recent consultations in both countries, people said they want to be able to cross the border easily once again, Kleist said.

"Everywhere we went (in northern Greenland) we met people with relatives on the Canadian side. When we travelled in northern Nunavut, people were very eager to take up again the mutual exchange they have had."

Border controls tightened up after the terrorist attacks on the World Trade Center in 2011, said Kleist.

"You could say before that, authorities were kind of more relaxed about the exchanges that were going on amongst the Inuit. The loose way, the gentle way, they had with people going across borders became much more strict."

Okalik Eegeesiak, a Canadian Inuk who leads the panel and the commission, said people have repeatedly expressed a desire to move freely again.

"There was much talk of political change and of borders that separate Inuit from one another," she said in a release.

"People in this region remember a recent past when they could still travel across the polynya's great ice arch that links Umimmat Nunaat (Ellesmere Island) and Greenland."

The commission, which also includes former Nunavut premier Eva Aariak, is to report to the Inuit Circumpolar Council, which represents Inuit internationally.

That council is to make recommendations to the respective national governments.