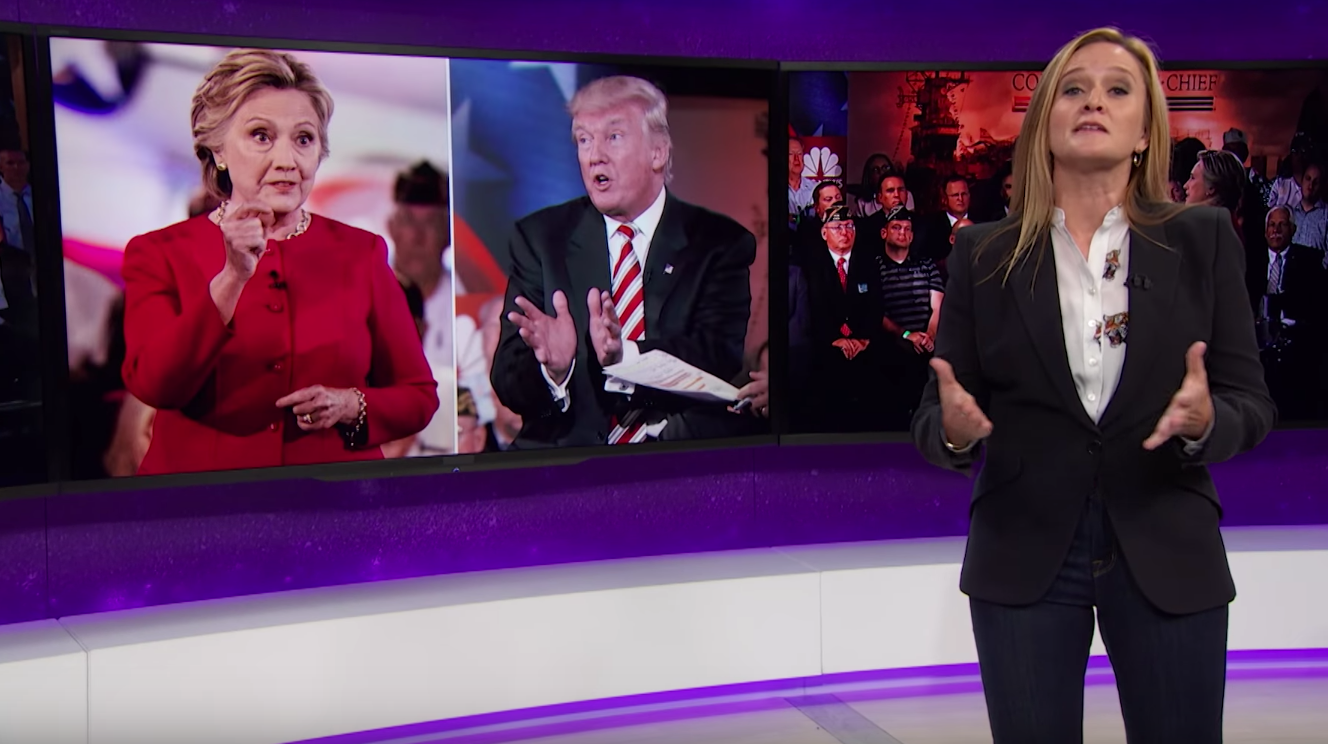 Hillary Clinton and Donald Trump are now locked in a tight race, according to a new poll.

How Clinton's decisive 10-point lead at the end of the Democratic convention evaporated — and why there's any race at all between two hugely mismatched candidates — might be largely due to an epic failure by the media covering this year's U.S. election.

Sometimes, it takes an outsider to tell the truth. This time, it was Canadian comedian Samantha Bee in her latest Full Frontal rant. After ripping journalist Matt Lauer for treating Trump with kid gloves and not challenging him as he misled audiences during the Commander in Chief interview, Bee argues that Lauer's abysmal performance was completely in line with the standard of coverage that corporate media has been offering its viewers to date.

"The truth is, (Matt) Lauer did a fantastic job at the meaningless campaign coverage we've come to demand from our media," she says. "At some point, our networks decided they could ask questions, and the answers would just be someone else's problem — specifically, yours."

Bee also highlighted coverage of Trump's statement that the U.S. should simply take Iraq's oil by force. Asked whether such actions might be against the Geneva Convention, CNN Pentagon correspondent Barbara Starr scoffs:

"Well, I'm no military lawyer, but I think that people can look at the definition of war crimes and come to their own conclusion."

She declined to give the viewers any clarity or insight from her position as Pentagon reporter, suggesting that the audience go research the answer themselves.

"You heard her, average Americans!" Bee says. "In your plentiful spare time, when you're not working your two jobs or watching your screaming kids, why not spend 20 or 30 hours studying the Geneva Convention!"

Bee also points to the media-manufactured outrage over Clinton destroying her cell phone after she left her duties as Secretary of State. As Wired magazine points out, Clinton's phone-destruction was actually a requirement, designed to keep government information from getting into the wrong hands.

There are too many examples for Bee to choose from. One glaring failure occurs when ABC News interviewed former Calvin Klein model and Republican Antonio Sabato Jr., about his views of the election.

Sabato Jr. blurts out that he believes current U.S. president Barack Obama is a "Muslim." When pressed about how he knows this to be true, Sabato Jr. shrugs and says vaguely:

Reporters let his statements stand as factual information, not bothering to shut him down as he rambles about Obama not believing in the Constitution and 'all the things that make America great.'

Strangely, the same media outlets that rewarded Trump with roughly $2 billion in free press, are the target of contempt from the Republican candidate. As Jack Shafer points out in Politico Magazine, Trump routinely insults the media, accusing it of unfair bias:

[Trump] protests range from blanket condemnations of press, in which he calls reporters “dishonest and unfair,” to the specific. He once called Fox News Channel “a sometimes awful and unfair media organization.” Being described as a “birther”? Unfair. The structure of the presidential debates? Unfair. Primary debate questions? Unfair. Criticism of Melania Trump for plagiarizing? Unfair. And it’s not just the press that's stacked against Trump, he says, it’s the judiciary, too. Of the Mexican-American judge presiding in a lawsuit against him Trump said, “He is giving us very unfair rulings.”

After months of the media treating Clinton and Trump as equals in the name of balance, there's now a very close race underway between these two candidates, and Trump may actually end up doing the unthinkable and taking the White House. Don't believe it? He's already envisioned it, and the world is full of gaudy things that he's summoned from imagination to reality.

When that happens, people might remember the opportunistic media coverage that did more to spread confusion than provide accurate information to the public.