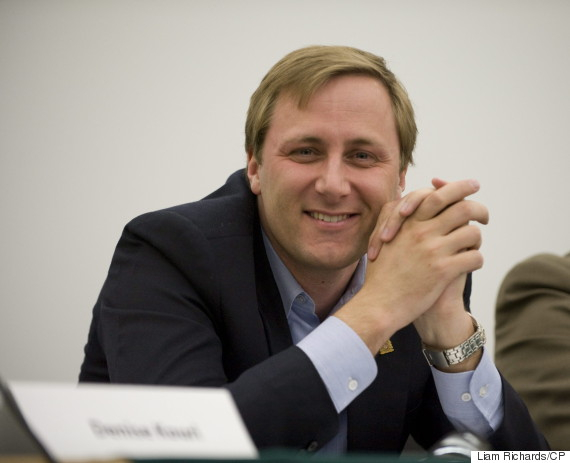 Saskatoon-University MPBrad Trost speaks at a candidate's forum at the University of Saskatchewan in Saskatoon on April 21, 2011. File photo by Canadian Press.
Previous story
Next story

He has just drawn criticism from across the political spectrum for endorsing a controversial same-sex marriage ad. But if Saskatchewan MP Brad Trost were to win the federal Conservative Party leadership race next year, he says he has no plans to change the law that allows same-sex marriage in Canada.

The outspoken, socially conservative backbencher, who announced his intentions to run for Tory leadership during the summer, said he recognizes that the political ship on gay marriage sailed long ago. If elected in 2017 however, he said he would push forward a policy agenda that includes other controversial positions, like oilsands expansion and anti-abortion values.

Trost, a five-term incumbent serving the recently-redrawn riding of Saskatoon-University, plans to make his leadership bid official within the next few days. But he faces stiff competition from Ontario MPs Tony Clement, Michael Chong and Kellie Leitch, and Quebec MP Maxime Bernier, many of whom are promoting a more progressive mix of policies that could appeal to a broader range of centre-right voters.

Trost doesn't plan on compromising anytime soon on his overall message. He said sticking to his values has branded him as the "full-spectrum" candidate in the race, a banner he is proud to wave as the race heats up towards towards election day in May. Inconsistency and lack of honesty may have been Stephen Harper's fatal error, he added, and he doesn't plan on repeating the former prime minister's mistakes.

“Stephen Harper was a very smart guy, and sometimes very smart guys think they’re smarter than the entire room," he told National Observer. "Part of the thing I think Stephen needed to do was often explain to people the reasoning and be honest with them, even if it was a tough issue.”

Trost said he would "level with" voters, even when a topic is difficult to understand. This would make him a "stylistically different" leader from Harper, he said, adding that collaboration between all MPs — including backbenchers and other leadership contenders — will strengthen party unity if he is elected.

"If you’re going to do something, you do it for the right reason, not for the political reason," he explained. "If people disagree with you, that’s fine. That’s the thing about being Canadian. We give and we take, and that’s one of the things I think we sometimes missed.”

When asked if he is concerned that his socially and culturally conservative stance could alienate progressive Tory membership, Trost quickly reversed the question: does a more left-learning stance not alienate traditional Conservative voters?

The MP, once trained as a geophysicist and an English teacher in Russia, has told media that he entered the race to give voters a broad range of values to choose from at the ballot. If elected, his priorities would be cutting taxes, protecting firearms owners, strengthening Canada's defence strategy, and maintaining relationships with traditional international allies, including the U.S. and the U.K.

"Conservatives can sometimes be portrayed as a bunch of scowley old men, we need to change that," he said. "If I were just emphasizing one issue, and one demographic, that would tell you one thing, but the fact that I’m going to go after the broad spectrum of issues, should tell you exactly what my goal is.”

Pipelines actually "not that disruptive"

His stance on abortion, gay marriage and euthanasia have previously landed him in some controversial headlines, but lesser known is Trost's position on climate change. The Saskatoon resident does not deny that the climate is changing, but believes mainstream media may have over-emphasized the role that humans have, and continue, to play in it.

He said climate science is very "nuanced," and that he would take a "nuts and bolts" approach to reducing Canada's carbon footprint that targets local projects, rather than sweeping national emissions policies.

“I think free enterprise actually works well to handle the environment and overall government regulation should be directed at things specifically and concretely, and not broad over the whole economy sort of approaches," he explained. "If something is a direct pollution, like cyanide from a gold mine, you deal with it directly, you don’t ban gold mining throughout all the countries.”

The "best thing" the world could do to tackle climate change, Trost added, is use more nuclear power and natural gas in an effort to displace coal-fired power. He hopes B.C. LNG exports come to fruition, and said as long as there is market demand for Canadian oil, he supports oilsands expansion too.

When asked how he would tackle Indigenous opposition to pipelines, particularly on unceded territory, he advocated for a policy of "negotiating aggressively." If consensus could not be reached (although he said he doesn't know "if anything is that definitive), he said he would cross that bridge when he gets to it.

Trost said his campaign will kick off in earnest over the next few weeks, with door-knocking, policy announcements, targeted communications, and media appearances.

By Elizabeth McSheffrey | News, Politics | June 1st 2016
Reports from the Race to a Safer World