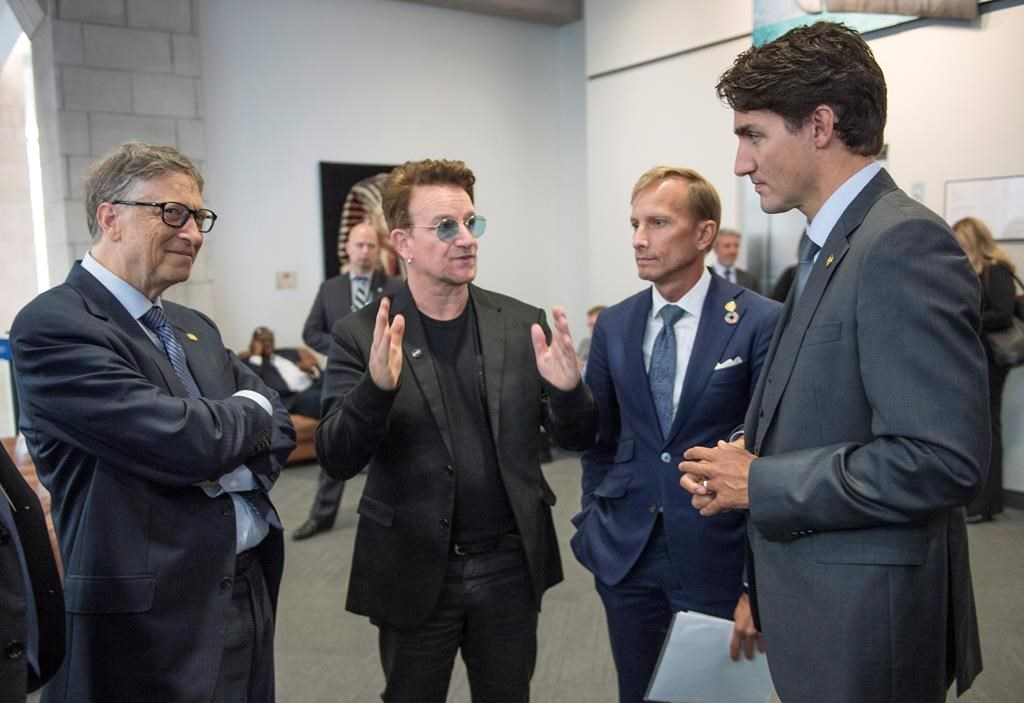 Philanthropist and billionaire Bill Gates, Rock star Bono from U2, and Mark Dybuk, executive director of the Global Fund, chat with Canadian Prime Minister Justin Trudeau in Montreal on September 17, 2016. Photo by The Canadian Press.
Previous story
Next story

Canada is a leader when it comes to collaborating on global issues, rockstar Bono said Saturday during his keynote address at a Montreal conference to fundraise for AIDS, malaria and tuberculosis.

"It's just great to see Canada leading on this," he said. "You've always been ahead of the curve in realizing we can do more if the international community works together and subsuming your ego into the grand plan."

Bono was joined onstage by UN Secretary General Ban Ki-moon and billionaire philanthropist Bill Gates for the second and final day of an international donor conference that hopes to raise $13 billion to replenish the Global Fund for the fight against these three major infectious diseases.

Canada has already promised more than $800 million for the 2017-19 funding period.

The U2 frontman and humanitarian also saluted Prime Minister Justin Trudeau's commitment to equality, especially to girls and women in poverty.

"The world hears you when you say 'poverty is sexist,'" he said.

"I'm a fan of Canada," he continued in French to applause.

In his own keynote address, Gates said the funds raised during the conference would help get more people into treatment and keep the three deadly infectious diseases under control.

"The commitments we're making here in Montreal are an opportunity to show that even in challenging times, we still care and we're willing to invest in the things that will make a more equitable, prosperous and secure world for people everywhere," Gates said.

The $13-billion funding goal would support the fund's goals for the next three years. The United Nations has a goal of eliminating the epidemics of AIDS, tuberculosis and malaria by the year 2013.

"We are the generation that can bring these epidemic under control," he said.

He said the world was moving toward eliminating the diseases but warned that they could return in stronger, more drug-resistant forms if not controlled.

On Saturday, the organization announced the pledges from private donors reached US$250 million.

Trudeau is hosting the conference, which is designed to show Canadian leadership on the international stage ahead of what is expected to be his first address to the United Nations General Assembly next week.

Trudeau plays nice at the UN, but DiCaprio says 'no more excuses'