Feeling neglected by Husky, First Nation crowdfunds to clean up after oil spill 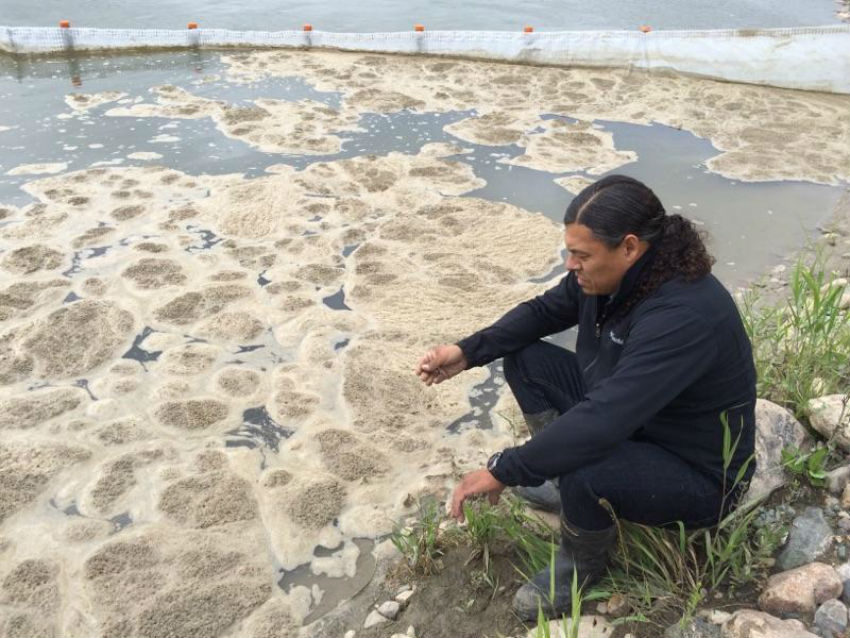 A First Nation in Saskatchewan whose waters were contaminated after a major Husky Energy oil spill in July has started a crowdfunding campaign to clean up oil damage to its territory.

Since the Calgary-based energy company's 19-year-old pipeline leaked more than 200,000 litres (roughly 1,570 barrels) of oil and other chemicals into the North Saskatchewan River on July 21, members of the James Smith Cree Nation have watched in horror as foam, oil sheen, dead crayfish, and tar have washed up along their portion of the river bank. They say birds, frogs, butterflies, and other wildlife that used to be seen around the river have disappeared from its banks since July 25, and are attributing the damage directly to Husky.

After the oil spill: community scrambles to respond

Husky Energy has been aware of their plight since early August. But according to Chief Wally Burns, the company has not offered any financial or boots-on-the-ground assistance to tackle cleanup in his community. The James Smith Cree Nation Council has already spent more than $140,000 on booms, independent water quality testing, and other measures to mitigate the damage — money that was intended for flooding safeguards and other community operations in the months to come.

The Indiegogo campaign, which aims to raise $50,000 to cleanup and restore the territory, is a last-ditch effort to recoup the funds that they poured into cleanup, and fund the restoration of the territory, said Chief Burns.

"The way I see it, it's our livelihood that's on the river," he told National Observer. "I took it into my own hands as a chief to protect my community, my reserve and my people."

Husky was not available to comment on this story, but at a meeting with the James Smith Cree Nation on Aug. 25, told band members it would respond to their complaints within four days. The representative in attendance, Todd Belot, also said Husky's actions would "speak for how well we've listened," and promised to relay the community's concerns to his superiors.

But according to Chief Burns, the company has done little to help. It provided a small amount of cash to support the nation's 'Cultural Days' event earlier this month, which included a water ceremony and prayer to its grandfathers for healing of the land, but turned down both of the cleanup funding proposals Chief Burns sent in "with no clear reasons given."

He said since then, Husky has indicated through emails and phone conversations that it intends to compensate James Smith Cree Nation for more than $140,000 the community spent out-of-pocket on spill response, but no timeline has been given. Chief Burns has imposed a deadline of Oct. 3 to respond to his requests for cash, but will proceed with cleanup initiatives — no matter the cost — hopefully, with help from online donors.

"The talks are baby steps, I guess you can say," he explained. "I try to be independent, not depending on anybody, because the way I see it, I think we’re moving in the right direction, utilizing our membership. Any kind of donation will help — this is going to have a long-term effect."

Husky declines to own up to impact publicly

James Smith Cree Nation is roughly 60 kilometres east of Prince Albert, Sask. — far past the point where Husky has concentrated the bulk of its spill containment efforts. Saskatchewan's Water Security Agency recently advised the cities of North Battleford, Prince Albert and Melfort that they could resume taking water from the North Saskatchewan for their drinking water treatment facilities, and local states of emergency have been lifted.

Husky claims to have cleaned up 88 per cent of the spilled oil to date. But it's unclear whether this 88 per cent includes damage that extends far past Prince Albert, including damage to First Nations reserves, or how Husky determined which areas were impacted enough to be included in this measurement.

While Husky has said on its website that the spill has affected the small city of Melfort, which is less than four kilometres away from James Smith Cree Nation, it has declined — after multiple media requests — to acknowledge publicly that the nearby First Nation has been affected by the oil spill. According to Chief Burns, the company has taken "full-fledged responsibility" for the damage in private, and he was shocked to learn that Husky would not confirm this information with National Observer.

"It shouldn’t be like that," he said. "The public has to know the information on what’s happening. I don’t want to brush this off, it’s an impact to my community."

The provincial environment ministry said it continued to "have dialogue with James Smith Cree Nation" regarding the spill response.

"The ministry has asked James Smith Cree Nation about the possibility of attending the upcoming September 26 engagement meeting to provide an update, and is awaiting a reply," the ministry told National Observer in a statement.

This article demonstrates clearly that pipeline companies should not be allowed to determine action to be taken with respect to an oil spill. They should send their people to look at the spell and start work but the work to be done should ultimately be determined by an independent body appointed by a government but paid for by the pipeline company.

Furthermore, all pipeline construction should be stopped until the pipeline companies can demonstrate that they have:

• developed and proven the technology to identify wear-and-tear on the inside of the pipeline, and

• developed and proven the technology to put pipelines over or under rivers or other bodies of water.

I agree LM. These oil

I agree LM. These oil industry companies have the capability to substantially improve pipeline safety. They chose however with the enablement of our governments to take the cheaper way so as to enhance their profits.

The O&G industry has a lot to

The O&G industry has a lot to answer for in the pollution they are causing and the damage to our clean water supply. Hopefully energy east never gets built and NB along with other parts of Canada will be spared a similier fate our aboriginal friends in Sask. are suffering.