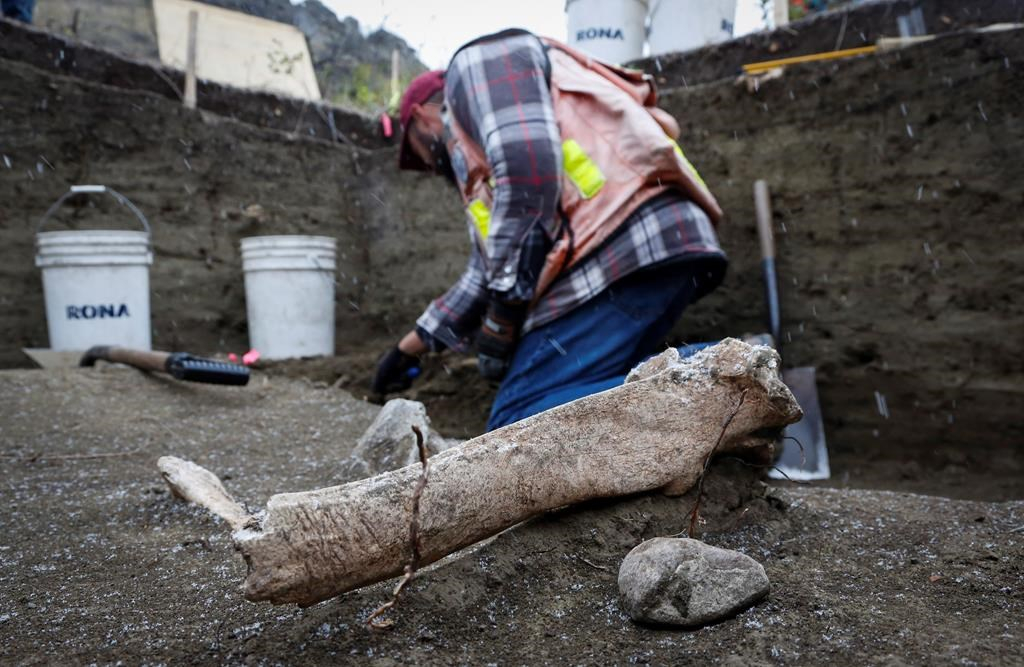 The Alberta government is wrapping up a three-year program to preserve artifacts left exposed in flood-damaged river valleys. Photo by The Canadian Press.
Previous story

Archeologists are hoping bones and tools unearthed after the 2013 southern Alberta floods will help paint a better picture of a little understood period in the region's indigenous history.

The Alberta government is wrapping up a three-year program to preserve artifacts left exposed in flood-damaged river valleys.

Researchers are particularly interested in clues that could help shed some light on the time between Europeans reaching North America and their contact with indigenous people in the West.

"This site has great potential to make a substantial contribution to what we know about a time period of great change for First Nations people in Alberta," said Daniel Meyer, an archeologist with Lifeways of Canada, a firm hired by the Alberta government to do the excavations.

On Friday, Meyer and his colleagues were busy digging and sifting in two pits at McKinnon Flats, a scenic fishing spot on the Bow River just east of Calgary.

One area, in the shadow of a steep cliff that Meyer said would have been perfect for trapping bison, is believed to be where the animals were killed and butchered.

Another spot nearby was probably used for boiling the bones to extract the marrow and for drying out the meat.

Similar sites in the area have yielded tools crafted by indigenous people, but made out of materials that would have originated in eastern Canada or even Europe.

For instance, a copper arrowhead may have been made from a melted-down kettle or pot brought West by a trader.

"Some people believe that the transition from traditional stone tools to metal trade goods was probably a very long and gradual process, but we may find from this site and others that, in fact, it was happening much more quickly than people believed," said Meyer.

No metal tools have been unearthed yet at McKinnon Flats. But bison bones and stone tools dating back 300 to 500 years have been dug up.

Ordinarily items that recent would be near the surface and easily disturbed. But at McKinnon Flats they had been buried several metres beneath the surface thanks to sediment deposited by repeated floods.

That's both good and bad from a research standpoint, said Meyer.

"That material buried so deeply means ... the only thing that really could disturb it are natural processes like the floods," he said.

"The fact that it is that deep means the data is going to be in better condition for us when we need it."

Since the 2013 flood, archeologists have examined almost 500 kilometres along the banks of the Bow, Highwood and Sheep rivers, said Wendy Unfreed with the Archeological Survey of Alberta.

"What we found was more than what we ever expected," she said.

It's evident the McKinnon Flats site was important to indigenous people, Unfreed said.

"This area was used again and again. I suspect that that's probably because the resources were really good ... Maybe the bison kill was a particularly good kill or was an area where the bison congregated."

The work needs to be finished before the ground freezes and the goal is to have it completed by the end of October.

Digging was temporarily halted on Friday by heavy snow. Tarps were placed over the pits to prevent dirt from turning into mud.

Darren High Eagle, who lives on the Siksika Nation less than an hour away, works for Lifeways sifting soil. He went into the work at the urging of his grandfather, who also did archeological field surveys.

The 30-year-old said he takes a lot of pride in finding artifacts that date back to his Blackfoot ancestors.

"From hearing stories from the elders and actually ... seeing it now, it's very interesting."