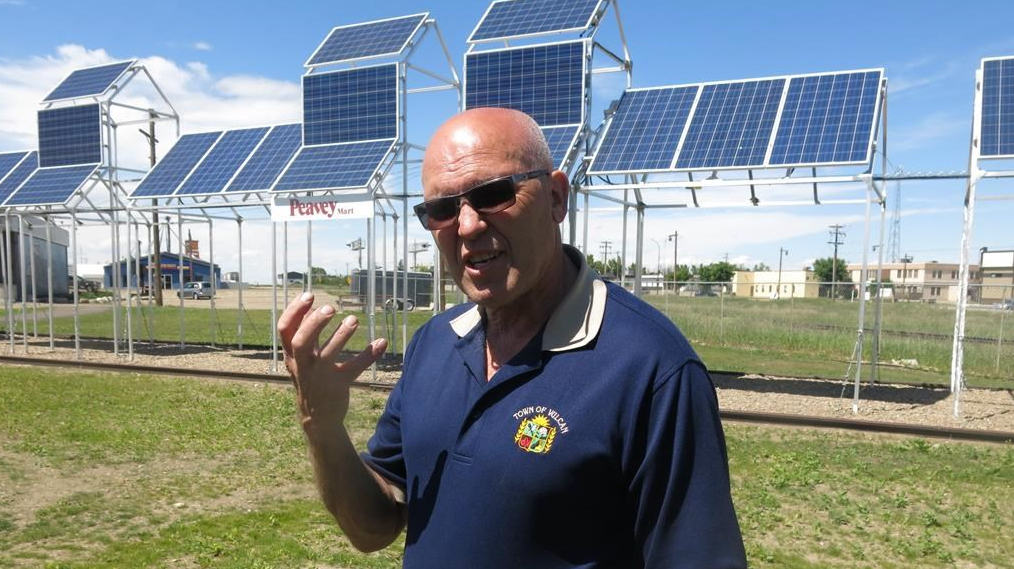 Vulcan, Alta. Mayor Tom Grant stands in front of a new solar park opened by the town on Monday, June 13, 2016. Photo by The Canadian Press.
Previous story
Next story

The National Energy Board says a renewable power project building spree between 2005 and 2015 took its share of overall generation in Canada from two per cent to 11 per cent.

NEB chief economist Shelley Milutinovic says the buildup means Canada is the fourth-largest generator in the world of environmentally friendly power from sources including wind, solar, biomass and hydroelectric plants.

The report says hydroelectric power capacity grew by about nine per cent to over 79,000 megawatts during the decade.

"I think that's one thing people don't really understand (is) just how significant on a world scale Canada is on the renewable front," said Milutinovic.

"It is fourth in the world on renewables after China, the U.S. and Brazil and it's second in the world in terms of hydro production; only China is bigger."

She says she expects the trend to renewable power to continue thanks to support from governments and consumers.

"Almost every province and territory has some sort of policy to encourage or promote renewables or support them," she said.

"Things like Alberta moving off coal by 2030, 50 per cent renewables for power generation in Saskatchewan by 2030, all of those things offer strong support for renewables."

The report notes that 11 per cent of Canada's greenhouse gas emissions came from the electricity sector in 2014, the latest year for which statistics were available. That's down from about 16 per cent in 2005.

From 2000 to 2014, emissions from the power sector fell 40 per cent, the report says, due mainly to the phase out of coal in Ontario and initiatives to reduce emissions in Nova Scotia and New Brunswick.

Hydro is the dominant source of electricity in Canada accounting for 55 per cent of total installed capacity. Four provinces and one territory — British Columbia, Manitoba, Quebec, Newfoundland and Labrador, and Yukon — derive more than 85 per cent of their power from hydro.

Two provinces and a territory relied primarily on coal or natural gas for electricity in 2015: Alberta (90 per cent), Saskatchewan (83 per cent), and Nunavut (100 per cent).

Could we have some more

Could we have some more context? How does this compare to Portugal, Costa Rica, Denmark.... ?