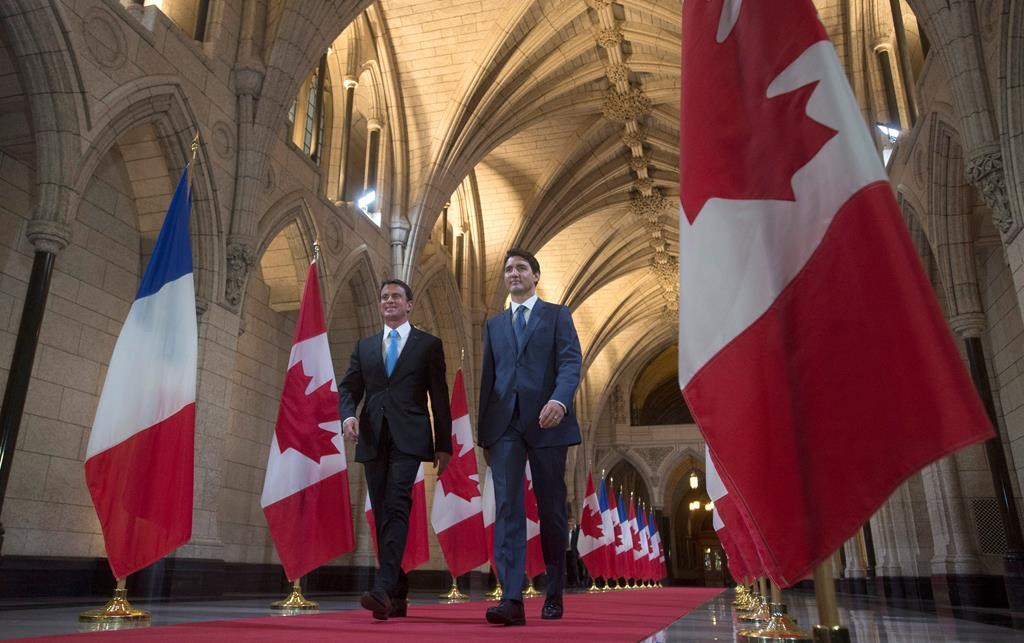 Manuel Valls and Trudeau did sync up over a Trump hobby horse — his persistent bashing of liberalized trade — by affirming their mutual support for a Canada-EU free trade deal that faces growing resistance in pockets of Europe.

But Valls, who was on Parliament Hill for the first day of a two-day visit to Canada, offered an unequivocal take on the Nov. 8 election: Clinton is the preferred choice, he said.

U.S. President Barack Obama was "elected by the world" and "Trump is rejected by the world," Valls said in French during a pre-dawn breakfast at France's embassy, attended by a small group of invited journalists.

Valls, who arrived in Ottawa late Wednesday, said he and Trudeau had discussed the U.S. election the previous evening, but he refused to divulge precisely what his Canadian counterpart said.

"We were laughing about it yesterday with Justin. It's up to the American people to make the decision," Valls said through an embassy-provided translator.

He and Trudeau also talked about Trump's influence on "spirits in Europe," he added.

"The only personality in France that is comparable to Trump is Marine Le Pen," Valls noted, referring to France's controversial right-wing politician.

"We hope for Hillary Clinton for an international relationship and also for Russia because it's concerning the role that Russia seems to have played in this campaign."

The U.S. has accused Russia of orchestrating the theft and disclosure of Democratic national committee emails to influence the November vote. Russia has denied the charge.

For Trudeau's part, the prime minister stepped only slightly beyond where he has been for months on the matter of Trump — that he will seek to work with whomever the U.S. people choose as their president.

When asked about the allegations of sexual assault swirling around the Republican nominee, a stone-faced Trudeau — a self-avowed feminist — would only say that he "has stood clearly and strongly all my life around issues of sexual harassment."

"I don't need to make any further comment at this time," he told a joint news conference on Parliament Hill.

Valls also revealed Thursday that he expects the Canadian prime minister to be in Brussels on Oct. 27 to sign the Canada-EU free trade deal, an agreement for which Trudeau expressed equally strong support.

Europe's failure to sign the agreement would send a strong signal in a post-Brexit world, Trudeau noted.

"If Europe cannot manage to sign this agreement, that sends a very clear message not only to Europeans but to the whole world that Europe is choosing a path that is not productive either for its citizens or for the world," he said.

"That would be a shame."

Couillard, Trudeau and Valls all praised the deal and talked about the urgent need to sign it, to a crowd of several hundred invited guests at the event hosted by the Board of Trade of Metropolitan Montreal.

During the talk, Trudeau reiterated his description of the deal as a "progressive agreement" that permits governments to legislate in order to defend the rights of labour, the environment and other issues "our constituents care about."

Climate change and the Canada-EU free trade deal have been singled out by Trudeau's office as being among Canada's top priorities.

Valls dismissed concerns by some analysts that the Canadian Forces are out of peacekeeping practice after a long, deadly decade of war-fighting in Afghanistan.

Canadian troops have proven their mettle as trainers in Iraq, "so I don't see why they couldn't do the same in Africa" for local troops there, said Valls.

"They need the training and the mentoring. And I'm convinced that the Canadians have all the required resources for that."

The Trudeau government has said it will commit 600 peacekeepers to UN missions and France has been pushing Canada hard to join the UN mission in West Africa.

France has 3,000 troops fighting a separate counter-insurgency mission in several countries that used to be its colonies, under the banner of Operation Barkhane.

Valls is scheduled to attend several events in Quebec City on Friday.