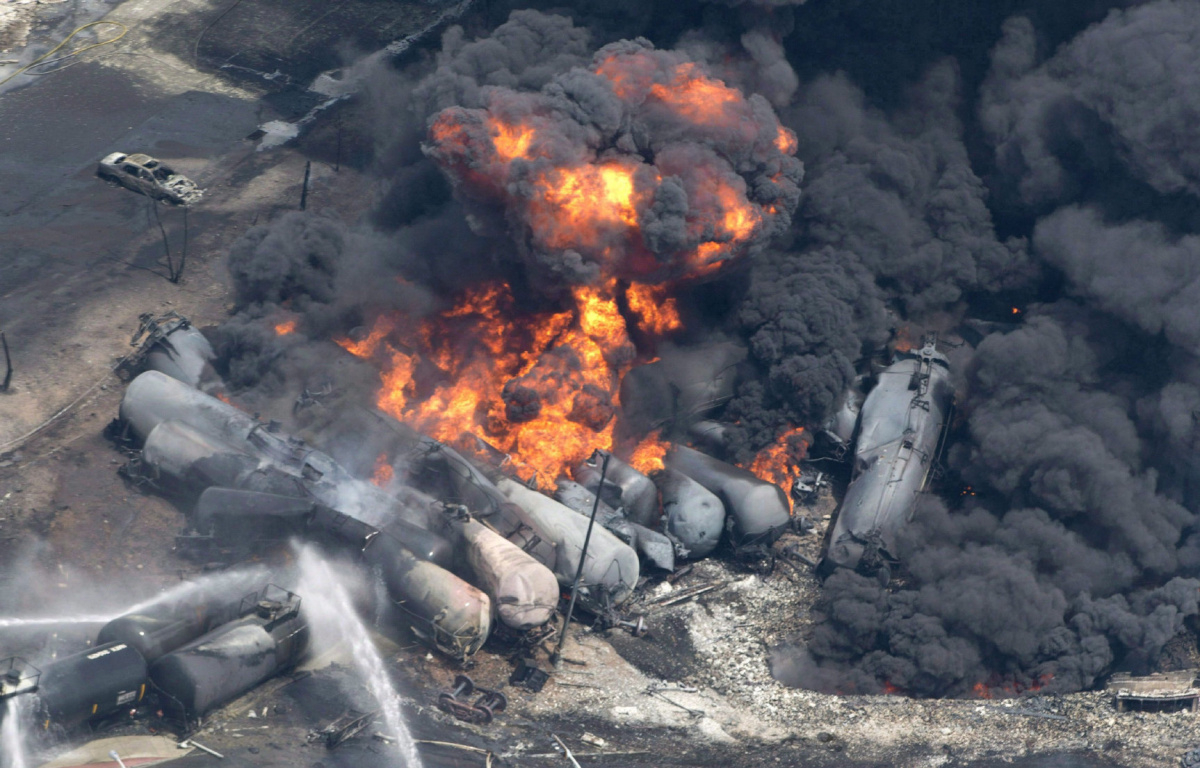 A fire blazes out of control in 2013 following the Lac-Mégantic runaway train disaster. File photo by The Canadian Press.
Previous story

The conductor as well as the owner of the train that derailed, exploded and killed 47 people in Lac-Megantic in 2013 have been added as respondents in a class action lawsuit.

About 25 other companies and individuals were once accused in the class action but they reached a deal with victims and creditors after agreeing to contribute $450 million to a settlement fund.

Joel Rochon, a Toronto-based lawyer for victims in the suit, told The Canadian Press that, of the three respondents, "Obviously our big target here is Canadian Pacific for their role in this catastrophe."

MMAC is in bankruptcy protection, has no employees and all of its assets were sold in 2014 to help pay victims and creditors.

Harding, along with two other former MMAC employees, faces 47 charges of criminal negligence causing death in the derailment.

"MMAC has no assets so they are effectively insolvent," Rochon said. "Harding obviously doesn't have the resources to compensate the victims here."

They were added to the lawsuit so the court can receive evidence and documents associated with their involvement in the derailment, Rochon said.

"(These two respondents) were the last piece of the puzzle and we believe they will provide the court with the entire perspective that is needed," he said.

The class action had been stayed pending MMAC bankruptcy proceedings in the United States and Canada.

Rochon said the stay was recently lifted, giving him the opportunity to add MMAC and Harding to the case, something the defendants did not oppose.

The $450-million settlement fund was tied to the bankruptcy protection proceedings for MMAC, which were overseen in Canada by Andrew Adessky, the court-appointed monitor.

Adessky said all of the wrongful death claimants have received compensation and challenges have been settled.

Distribution of economic damage payments has begun and Adessky acknowledged some people are still people contesting the level of funds they received for moral damages.

"I appreciate that from the claimants' point of view they would like to see their payments made as fast as possible and we are trying to do that," he said.

"We're cognizant of the fact people have been waiting and are eager to put this behind them. We will continue to work as fast as we can to get this resolved."

Aside from the Quebec class action, CP is facing a series of other lawsuits related to the Megantic disaster.

On Wednesday, lawyers in the U.S. representing victims of the derailment filed a motion asking a judge to reconsider a September court ruling involving CP.

CP is also facing a $409-million lawsuit brought forth by the Quebec government related to the derailment.

It is also dealing with two other claims in the United States totalling more than US$200 million.

CP maintains it had no responsibility in the disaster because it handed off the trains to MMAC for the final leg of the journey.

Quebec's $409-million suit is back in court Nov. 8 in Lac-Megantic, followed by the class action proceedings on Nov. 10 in Sherbrooke.

Questions on the crime of Lac

Questions on the crime of Lac-Mégantic.

After years of deregulation on trail safety, aren't Stephen Harper and his minister of Transport in 2013 accountable too?

Who can we trust?