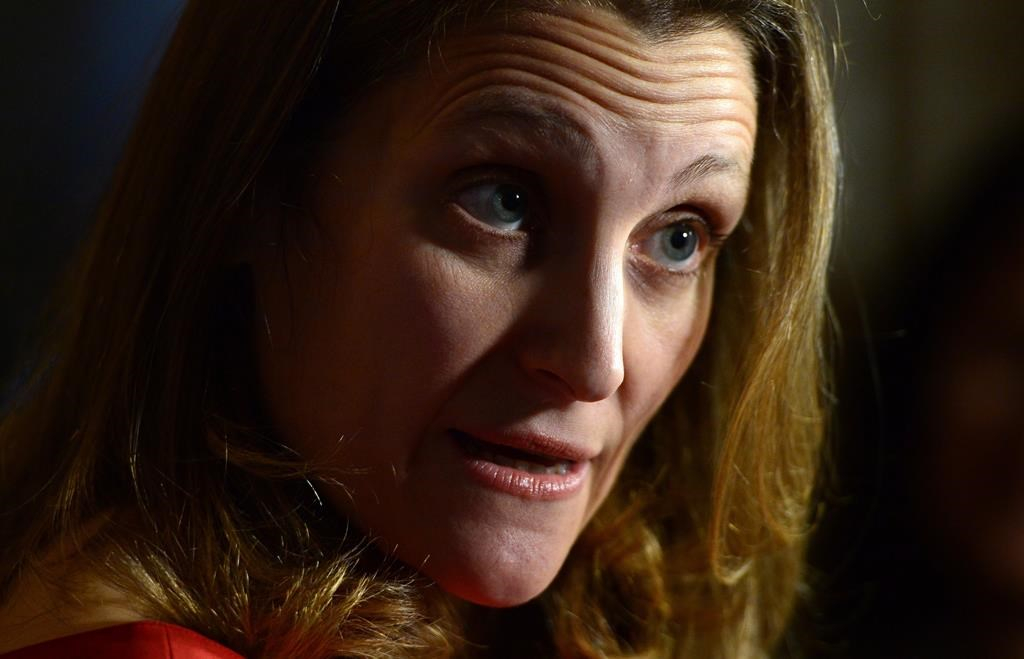 With the U.S. presidential election looming, Canada's new trade deal with Europe should be seen as a showcase for how strong trading relationships are better than "building walls," International Trade Minister Chrystia Freeland said Monday.

The Comprehensive Economic and Trade Agreement, or CETA, could set the tone for any future talks with a new administration in Washington, Freeland said as she hailed Sunday's signing of the deal.

"I am very concerned by the protectionist rhetoric we are hearing in the United States," Freeland told an Ottawa news conference prior to tabling legislation to implement the agreement for review by Parliament.

"The protectionist backlash we're seeing in a lot of the world, including in Europe, is dangerous. In being able to get CETA signed ... Canada has done something very powerful and very strong in the world to push back against that."

Republican presidential nominee Donald Trump has warned that he would renegotiate or even tear up the North American Free Trade Agreement — NAFTA — and impose hefty tariffs on goods imported from outside the United States.

Democratic candidate Hillary Clinton hasn't gone that far, but has also been critical of NAFTA.

Since coming into force in the mid-1990s, NAFTA has created a common trading market between the United States, Mexico and Canada.

But on Monday, just days before next week's U.S. election, Trump repeated what he's been saying for months: the trade agreement has been a "disaster" for employment in America's industrial heartland and should be torn up.

Freeland said that kind of rhetoric has her worried for Canada's exporters.

"Now is not the time to be building walls," she said.

Prime Minister Justin Trudeau has defended CETA as a deal that will provide immediate benefits to Canadians and Europeans, even though the agreement could be scrapped at any time before final ratification.

The timeline for enacting the deal had the Council of Canadians, a staunch opponent of CETA, questioning why the Liberal government wouldn't wait to table an implementation bill.

"Given the process could take another five years in Europe, what’s the rush here other than another photo op?" asked Maude Barlow, the council's national chairperson.

"There needs to be a fuller public consultation process on CETA, just as the government has done with the Trans-Pacific Partnership."

The bulk of CETA, some 98 per cent of the deal, will come into force once it survives ratification votes in both the European Parliament and in Canada. The remaining two per cent only comes into force with the additional approval of Europe's 28 national parliaments.

Regardless, the Canadian Chamber of Commerce applauded CETA as the beginning of a new generation of trade agreements, calling it "a first step into new trade territory."