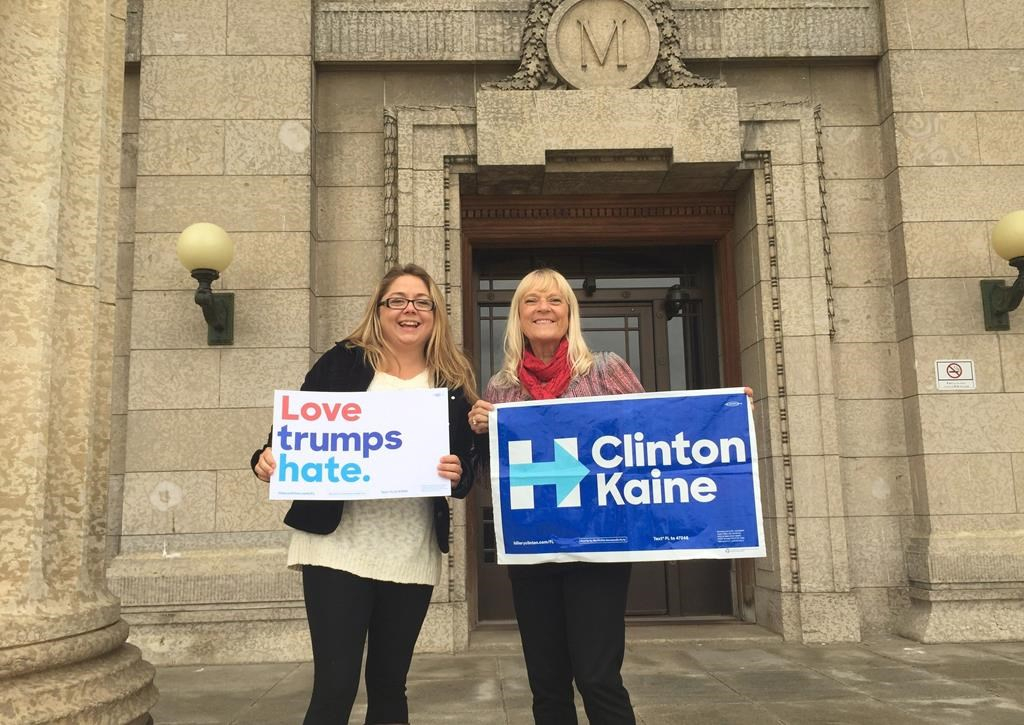 A dozen Canadian women are heading to Florida on a mission unrelated to sun, surf and sand — they intend to help Hillary Clinton defeat Donald Trump.

They're bunking in a pair of houses that will serve as temporary campaign dorms for the travelling Canucks, as they knock on doors and make calls in what's arguably the most important region of the most important swing state in the U.S. election.

''We didn't come here to have a holiday — we're here to work,'' said Cheryl Conley-Strange.

She knows from experience. The Winnipeg woman has worked every federal Liberal campaign since 1979, when she was a poll captain for future foreign minister Lloyd Axworthy. She'd intended to retire from organizational work after the federal election, satisfied with the state of her party.

But she figured she had one more campaign in her.

Conley-Strange chatted with Manitoba friends about helping political allies in the U.S.: ''I started saying to them, 'Hey, why don't we go down to the States and help (the Democrats)?'... To be neighbourly — to help people who feel the same way we do (about issues)."

She suggested staying at her family's winter home in central Florida. So many people took her up on the idea that they wound up getting a second place in the same Kissimmee neighbourhood. She'd bought in that location a few years ago — she liked the proximity to Disneyworld.

It also happened to be on rich electoral soil.

She only realized recently that Central Florida is considered the swing region of the biggest swing state. it's sandwiched between Florida's solidly Republican north and solidly Democratic south. And it has tens of thousands of new available votes.

An influx of Puerto Ricans is having a ripple-effect on the politics in this area, and therefore on the country.

These new residents are eligible to vote immediately, as Puerto Ricans are U.S. citizens. They tend to be more liberal than the state's Cuban voters. And their ranks are growing to rival the Cubans.

A group that works to register Latino voters has three offices in the state — and none are in the metropolis of Miami to the south. They're all here in central Florida, in Kissimmee, Orlando and Tampa.

This is where the electoral action is, says Esteban Garces, the state head of the group, called Mi Familia Vota.

"This region is going to determine who the next president is," Garces said. "Central Florida is the swing region in Florida... (And) Donald Trump needs Florida to win. If Hillary (Clinton) captures Florida, well, she captures the White House."

Central Florida's population has grown almost 10 per cent since the last election, and 60 per cent of that growth is Latino. Mi Familia Vota alone has registered more than 33,000 people in the area this year, and half were Puerto Rican.

Conley-Strange played a role in registration.

She came in September to meet Democratic party organizers; helped set things up for the arrival of her friends; and made calls to register voters. She sat near Spanish-speaking colleagues, and turned over the phone whenever she couldn't communicate with someone in English.

Her friends arrive over the coming week.

They include a former Manitoba Liberal candidate and provincial party official. Because she arrived earlier, she got to attend a campaign rally last week featuring President Barack Obama: "It was like seeing a rock star," she said. "A once-in-a-lifetime experience."

She said she supports the Democrats for their shared views on social issues, like same-sex marriage and women's rights. As for their opponent, she expressed dismay over things Trump has said about foreigners, like Mexicans.

"It just goes so far beyond anything we're used to seeing in politics," she said.

"It can't become the norm."

The one thing Canadians can't contribute to this election is money.

"I asked (the Democrats) if I could buy a T-shirt," she said.

A foreign national can volunteer for a U.S. party and, in fact, Canadian and American campaign workers regularly help parties across the border. The federal Liberals even lease the same voter-outreach software used by the Democrats — so Conley-Strange knows the system well.

If you believe as though you will be a sophisticated camper and what things to include a challenge into the exercise, you are able to explore forests emergency. This is very difficult even so, and ought to simply be taken on with the most advanced camper. This particular journey implies only eating food that you simply find or end up!