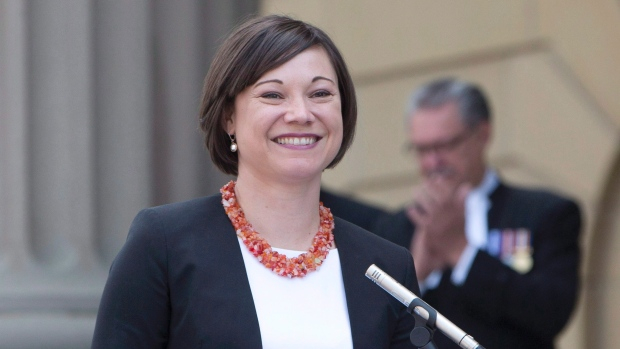 The legal rubber has hit the road on Alberta’s promise to cap greenhouse gas emissions from the oilsands — the engine of the province’s economy.

Environment Minister Shannon Phillips introduced Bill 25 in the legislature Tuesday that, if passed and enacted, will forbid oilsands industries from collectively emitting more than 100 megatonnes of greenhouse gases a year.

Phillips said the legislation would help green the industry while spurring innovation and growth.

"Alberta got the oil out of the sand. We can now get the carbon out of the barrel," Phillips said at a legislature news conference.

"Alberta can be an energy producer and a world leader on climate action, and Alberta must get the most value for our resources and find new markets for our products.

"But we cannot do it unless we are taking credible action. This bill is a critical element of that story."

The bill is part of a multi−faceted plan being introduced in stages by Premier Rachel Notley’s NDP government to reduce the effects of climate change and to remake Alberta’s energy infrastructure into one that relies more on renewables such as wind, solar and hydro power.

Alberta oilsands operators emit about 66 megatonnes of greenhouse gases a year. Government officials say that, without changes, those emissions will reach 100 megatonnes by 2030.

Phillips said the province is investing in new emissions−reducing technologies and "we have faith in Alberta industries to deliver."

Under the proposed legislation, cabinet would be responsible for making sure that the 100−megatonne cap is not breached. It would do so by regulations and mechanisms such as financial penalties for companies that fail to bring emissions within reasonable limits. Large industrial emitters currently pay $30 a tonne above certain emissions intensity thresholds.

There would be exceptions to the limit.

Electricity used in co−generation would be exempt. New businesses or new upgrades operational as of this year would be subject to a separate 10−megatonne limit to recognize their role in creating new jobs and attracting investment.

The rules are to take effect once the bill is passed and proclaimed, which is expected to happen in the current legislature sitting.

They are to be crafted with help from the Oilsands Advisory Group, an 18−member panel struck in July.

The advisory group is expected to report to the province early next year on the best ways to keep industry within the 100−megatonne limit, as well as suggest ways to innovate and advise on what the greenhouse gas landscape may look like after 2030.

The province has also promised to end coal−fired electricity by 2030 and introduce incentives to expand wind, solar and hydro energy. Legislation in those areas is expected this sitting.

Alex Ferguson, vice president of policy and performance at the Canadian Association of Petroleum Producers, said details of the proposed cap still need to be worked out but that overall industry recognizes it has to focus on reducing emissions.

"Our membership is completely aligned that the presence of a limit on emissions — unheard of around the planet on any industrial activity — is a stake in the ground that means we need to focus on this," said Ferguson.

"This will be taken around the table as a very real, very clear driver to continue and increase our focus on that technology innovation space," he said.

On Jan. 1, a new carbon tax kicks in, which will increase prices at the gas pumps and on heating bills. There will be full or partial rebates for low− and middle−income Albertans.

Why is there no mention of

Why is there no mention of the second portion of Bill 25 which leaves the window wide open for the Lieutenant Governor in Council to make, change, prescribe, define or establish any or all portions of the Act?

This is token Act. All oilsands producers and pundits have nothing to worry about, but they already knew that. Emissions will not be reduced, limited, capped or otherwise encumbered. This is merely more NDP posturing and greenwashing, to get a pipeline. Bill 25 in no way should or could be considered "credible action".