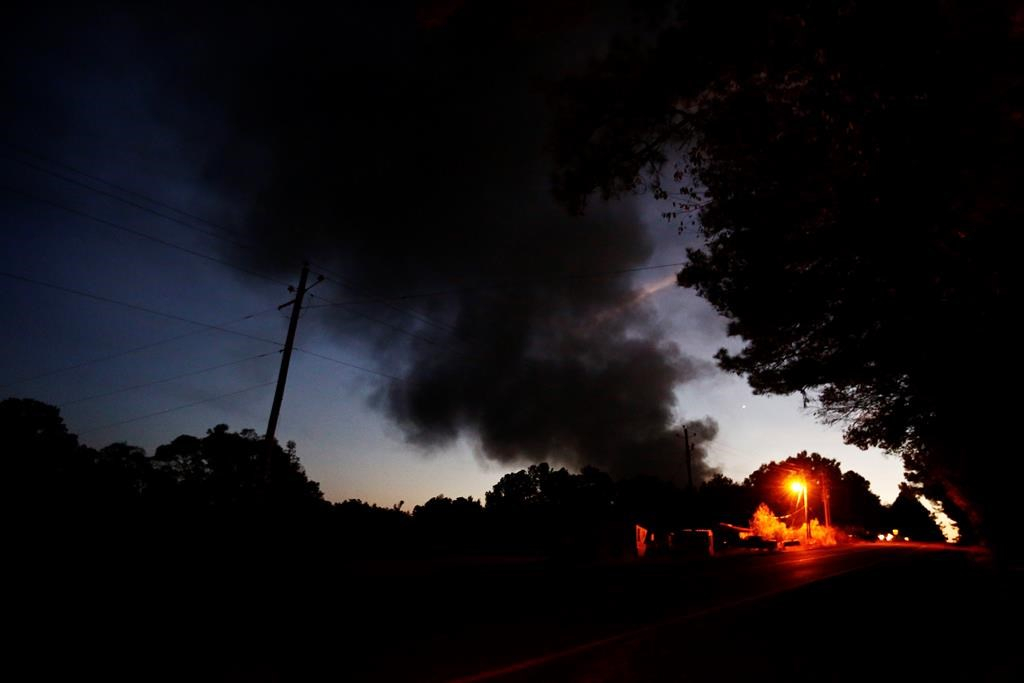 A deadly explosion on a gasoline pipeline, owned in part by the Quebec pension fund, has rocked Northern Alabama. Photo by the Associated Press.
Previous story
Next story

One worker is dead and five others injured following an explosion on a major pipeline in Alabama.

It's the second time in two months, that an incident has shut down the Colonial Pipeline that supplies gasoline to millions of people, raising the spectre of another round of gas shortages and price increases.

The disruption occurred when a track hoe — a machine used to remove dirt — struck the pipeline, ignited gasoline and caused an explosion Monday that sent flames and thick black smoke soaring over a forest in northern Alabama, Colonial Pipeline said.

The Quebec pension fund, the Caisse de dépôt et placement du Québec, purchased a share of the pipeline, worth about 16.55 per cent, from energy company ConocoPhillips for US$850 million in 2011.

“The Caisse is always interested in quality assets that yield stable, long-term returns,” said Normand Provost, executive vice-president, private equity and chief operations officer at the Caisse de dépôt et placement du Québec, in a news release at the time. “This particular investment targets an infrastructure project in a regulated industry that we know well through our investments in Gaz Métro, Interconnector, Enbridge and Fluxys.”

A September leak that spilled 252,000 to 336,000 gallons of gasoline occurred not far from the location of Monday's explosion. That leak led to days of dry pumps and higher gas prices in Alabama, Georgia, Tennessee and the Carolinas while repairs were made.

The cause of the leak still has not been determined, and the effects of the latest disruption weren't immediately clear.

Colonial Pipeline, based in Alpharetta, Georgia, operates 5,599 miles of pipelines, transporting gasoline, jet fuel, home heating oil and other hazardous liquids in 13 states and the District of Columbia, according to company filings. Authorities have not said which type of fuel was involved in the explosion Monday.

At the time when the Quebec pension fund bought into the project, the pipeline in question was considered to be the largest refined petroleum products pipeline in the United States. It extends more than 8,800 kilometres between the Gulf of Mexico and the Northeastern U.S. and transports the equivalent of 2.3 million barrels per day.

Plagued by a severe drought after weeks without rain, the section of the state where the explosion happened has been scarred by multiple wildfires in recent weeks, and crews worked to keep the blaze from spreading.

Coleen Vansant, a spokeswoman with the Alabama Forestry Commission, said crews built a 75-foot-long earthen dam to contain burning fuel. The Shelby County Sheriff's Office said the blaze had been contained but it was unclear how long the fire may take to burn out.

"We'll just hope and pray for the best," Gov. Robert Bentley said in a statement.

Houses around the blast scene were evacuated, and sheriff's Capt. Jeff Hartley said it wasn't clear when people might be able to return home.

Eight or nine subcontractors were working on the pipeline when it exploded about 3 p.m. Monday, sheriff's Maj. Ken Burchfield told Al.com. The conditions of those hurt weren't immediately known.

"Colonial's top priorities are the health and safety of the work crew on site and protection of the public," the company said in a brief statement.

The Associated Press with files from National Observer

Unfortunately, a similar deadly catastrophe could occur on TransNorthern's Ontario-Quebec pipeline, not necessarily caused by third party activity, but potentially by its own deteriorating condition. Imagine this scenario: a 60+ year old refined petroleum products pipeline transporting explosive/flammable materials (in some areas the pipeline is not covered by much of anything), through the most densely populated areas of Canada, and an aging, unsafe pipeline.
This pipeline is still operating, despite numerous safety orders imposed upon TransNorthern by the National Energy Board, but not followed by TransNorthern. Two dissenting NEB board members argued that this pipeline should be shut down.
But it still operates. Is the NEB waiting for a worst case scenario before it takes action?
What are the real reasons the NEB allows TranNorthern's continued operation of their pipeline in this corridor?